Lorraine Dusky is an accomplished journalist and author. She has made a career of writing, a career which led her to meeting the father of her daughter. It is also a career which contributed to her feeling the need to hide the shame of her "out of wedlock" 1960s pregnancy and then to hide the evidence born of that illicit affair by placing her daughter for adoption. 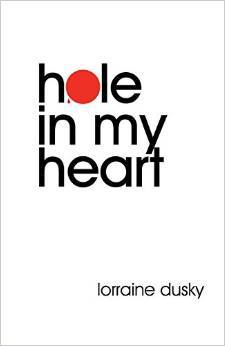 In Hole in My Heart: Memoir and Report from the Fault Lines of Adoption, Lorraine shares her journey of loss with brave and brutal honesty.

The backdrop for Lorraine's story is the 1960s, a time when neither cancer nor infertility nor sex were spoken about aloud, a time of morality incomprehensible to today's youth. Unmarried girls and women who "got themselves in trouble" (became pregnant) were shunned by their families and sworn to lifetimes of secrecy lest no man would ever want to marry them. It was the single worst sin a girl could commit.

Lorraine first went "public" in a courtroom in 1973. In 1975, after gaining the loving support of her mother and brothers, she wrote an Op-Ed piece about her experience of adoption and loss in the New York Times, under her own name. In 1976 she testified again to unseal New York state adoptee birth certificates, and in New Jersey she testified to help two adopted women seeking their birth certificates.

At the same time, in Massachusetts, petite, soft-spoken Lee Campbell placed an advertisement in a Boston newspaper which led to the 1976 founding of Concern United Birthparents (CUB). Campbell then appeared on national television to speak about her loss and give a face to the missing piece, of what has been called the "adoption triangle" of adoptive and birth families sharing a child in common.

Three years later - in 1979 - Lorraine Dusky published her first book, Birthmark, the first book to reveal one mother's unique path to adoption loss. That same year I was one of five NJ mothers who co-founded the original Origins, a national organization for mothers who lost children to adoption. Like Campbell, we publicly exposed our "dirty little secret" on national television in order to break the legacy of shame and help others know that they are not alone.

Birthmark, CUB, and Origins paved the way for other birthmother books, including: two (I Would Have Searched Forever and To Prison with Love), by Sandy Muser, another of the pioneering mothers, a staunch activist, and a true martyr for the cause. The Other Mother by Carol Schaefer,which was made into a TV movie in 1995.

Collected stories of birthmother experiences have also been documented by Merry Jones in Birthmothers: Women Who Have Relinquished Babies for Adoption Tell Their Stories; in Birthbond: Reunions Between Birthparents and Adoptees - What Happens After by Judith S. Gedman; and in Ann Fessler's 2007 book, The Girls Who Went Away: The Hidden History of Women Who Surrendered Children for Adoption in the Decades Before Roe v. Wade. More recently, Fessler produced the documentary A Girl Like Her. The general public got its first big-screen view of the life of a mother forced to let her child be taken and placed for adoption in 2013, in the film Philomena.

All of these first-person accounts are as important as they are painfully difficult to share. As Lorraine writes:

"Telling your story about the daughter that was but isn't, is always - always - an internal firecracker. It gets easier with time but it's never easy. The sympathetic nervous system takes over, the adrenaline pumps, the heartbeat increases. Every time I talk about it I am reminded that no matter how, no matter why, I was a conscious partner to my daughter's relinquishment."

The accounts of mothers who, like Lorraine, relinquished children to adoption need to be told for many reasons. They are a part of the history of the times in which their losses occurred and they afford the public and adoptees, especially those who may never be able to complete their own search, insight into the hardships single mothers were - and still are - confronted with and the pain and heartache of their loss.

It is also important because the opposition to adoptee access to their original birth certificates continues to allege that mothers who relinquished were promised anonymity and need to be protected. Coming forward with our stories helps to dilute these claims Birthmothers have been an important part of the adoptee rights movement for decades. Many mothers are politically active in their states, getting bills introduced and passed that will reverse the antiquated laws that keep adoptees' original birth certificates from them.

Lorraine Dusky has now returned with Hole in My Heart, a title which reflects the universal and never-ending grief of losing a child to adoption. This is true even for mothers who, like Lorraine, were "conflicted" about their pregnancy as well as for those who were joyful, confused, scared, unsure, shocked, hopeful, or excited ...

Studies have found that rather than dissipate with time, often the pain exacerbates over the life of the mother. The limbo loss of a child who is adopted out is very different from a death. The loss impacts the lives of mothers, fathers, rippling out and negatively impacting everyone in their lives.

The grief, regret, and shame are universal, even among a very diverse group that defies stereotypes. While most - but not all - are white, they cross all religious backgrounds. Some were teenagers, but not all. Most were unmarried at the time, but not all. Some had other children when they relinquished parental rights, feeling unable or lacking the support needed to parent another. Some were forced by their parents, most - but not all - were in love with the father of their child.

Some subsequently marry the father of their child. Some had subsequent children, others did not. Some search, some choose to wait to be found by their adopted-out children, others are unable to. Reunions between adoptees and their original kin run the gamut from storybook to hostile or non-existent, and everything in between, and are described in many memoirs written by both domestic and internationally adopted persons.

In the 1970s, when Lorraine, I, and others discovered a movement of adoptees in search, our relinquished children were teens. Many of us, as Lorraine heard whispers of, jumped on opportunities to find them and open our closed adoptions. I created the "survey" .Lorraine describes using to determine if they knew they are adopted. Some mothers chose to contact the adoptive parents first. Most were confronted with fearful adoptive parents.

Lorraine was among the luckiest of us. She was immediately given the opportunity to meet her fifteen-year-old daughter, Jane, and learned of the adoptive family's need for medical information, and that the adoption agency having failed to give them what Lorraine had provided. She learned that her daughter had expressed a wish to find her, and, miraculously, Jane's adoptive mother allowed Jane to spend weeks - weeks! - with Lorraine, in essence opening a closed adoption.

At just sixteen Jane demanded: "Why did you give me away? Don't you know how much that hurt?"

Lorraine reflects: "How I wish I'd simply said then: I made a mistake, a big, fat mistake."

Adoption ripples effect all of a birthmother's relations, and adoption is often inter-generationally experienced in families. "Adoption begets more adoption," Lorraine says, a "vicious cycle." It is thus that Lorraine's story does not end with the tragic death of her daughter Jane because Jane left Lorraine two granddaughters. The first, born just days before Jane's birthday, replicates and repeats the history of Jane's birth and relinquishment twenty years prior - almost to the day. Adoptees, Lorraine notes, are seven times more likely to lose a child to adoption, replicating their own start in life.

Lorraine blogs about adoption issues with Jane Edwards at First Mother Forum where she shared about her first granddaughter, Sarah, who grew up Lisa Bremmer and seems to have inherited her grandmother's writing skills. Lisa describes herself, in part, as "a writer, performance poet and community organizer." She is a "two-time Givens Foundation fellow and has received a Playwrights' Center Many Voices Fellowship." In an article for Gazillion Adoptees, Lisa writes that her "biological grandmother," Lorraine, made "a decision she has written about at length and still haunts her, as far as I can tell."

Of all the things Lorraine and I share is that both of our relinquished daughters took their own lives, leaving both of us to wonder whether, if we had found the courage and support we needed to have raised our daughters, they might still be alive. While every suicide has a multitude of reasons, a 2013 study found adoptees four times more likely to attempt suicide. (No studies have been conducted on the number of birthmothers who have committed suicide.)

Lorraine has opened up her painful wounds to give us a welcome addition to the genre of birthmother literature. Hole in My Heart is one mother's story. It is unique as is each and every story of mother loss, yet there are common threads. Hole in My Heart artfully weaves Lorraine's personal narrative with the broader political issues, statistics, and studies surrounding adoption loss and separation.