I've thought so much of the families in Newtown, CT; particularly the parents of those who lost loved ones. From the youngest to the oldest victims, they were all someone's family members, someone's child. In 2008 my oldest son, Jordan, 19 at the time, was killed in a car accident while on his fall break from college in Massachusetts. He was in the car with three friends one exit away from his school when the crash occurred. Jordan was declared dead at the scene, his three friends walked away without injury.

While learning to live with the death of my child, the greatest comfort I received was from parents, who had also lost a child. Their advice, along with the advice of my very wise father, taught me that there would be glimpses of real joy in my life again. That notion was hard to embrace at first, but with time, their words have come to be. As helpless as I feel, the only thing I have to offer the families who have such a long road to believing in joy again are the words in my blog post entitled, "Say His Name." For all who embrace these families and indeed for the families learning to live with loss, please remember to say your loved ones' names without hesitation and the images of joy they brought to you will start to make room in your hearts for healing.

I've never seen a picture of my father as a boy, yet I've heard many stories about his childhood growing up in a coal mining community in West Virginia, as the third youngest of thirteen children, that I have a distinct picture of him in my mind. My father is quite the storyteller, and I've sat in rapt attention as he's told me of his boyhood antics as well as those of his siblings. I've also listened as he's shared the sorrows his family endured. As a young man in college, Daddy, in less than 14 months, lost a sister to illness, a brother to murder and his mother after she made the statement, as they sat on their front porch, "I will not live to bury another one of my children." She died a few months later.

Every time Daddy shared the story of losing so many loved ones in such a short span of time, I looked at him with compassion and awe. How do you keep going when you lose so much in such a short amount of time? Daddy had survived unimaginable loss, and yet, didn't seem haunted by what he endured. His life had gone on with a college degree, marriage, work and family. He spoke lovingly of his family. He told funny and poignant stories of relatives that were long gone by the time I was born. Because of him, I felt I knew them. Their deaths did not erase them from Daddy's heart. He talked about them all the time. I watched him because as untouched as I was by the death of someone close to me, I knew it would happen eventually. Daddy provided my first road map for mourning.

My "eventually" came with the shocking news of Jordan's death. When I made the call to my parents in the middle of the night to tell them that Jordan, their oldest grandchild, had been killed in a car accident, my mother screamed and cried, and then my father was on the phone. He told me they would be there as soon as they could and they were. By Monday afternoon, they were sitting at our kitchen table. The friends who had held watch over us since early that morning quietly left once our family arrived. We sat, cried and talked.

Daddy's words to me were simple and direct: "Don't stop talking about him. You say his name everyday." I'm not sure if I would have taken such direct advice from just anyone, but I knew my father's experiences with loss. Daddy's advice was him speaking what he had lived. The way I knew about my aunts, uncles and paternal grandparents was because Daddy didn't stop talking about them. He said their names and his eyes lit up with the memories they invoked.

Every time I called him in the weeks and months after Jordan died, sometimes barely able to speak because I couldn't catch my breath from crying, he would calm me, soothe me, always telling me he wished he could take some of the pain away. He never failed to remind me of his feeling that holding in my grief would make me sick. Then he would ask, "Are you talking about Jordan? You make sure you keep talking about him." I always told him, "Yes, we talk about him everyday."

My children learned by example that it's okay to cry and miss Jordan, but it is also okay to remember all the funny Jordan stories and talk about him as much as they want and need to. We sit at the dinner table and one of my daughters will say "remember the time Jordan raced into the bathroom right before I was going in to take a shower and jumped in the tub with all his clothes on and starting singing in that high voice 'I'm taking a shower' as he pretended he was really taking a shower?" We all nod in remembrance and laugh. That story reminds another one of us of some other Jordan tale. Or there are times when something happens at school or elsewhere and one of our kids asks "did that ever happen to Jordan?" We never turn away from an opportunity to talk about him. He will always have a seat at the table.

Even almost a year after Jordan's death, my father still reminds me to "say his name," and with some clarity around my own experience, I understand. Daddy's philosophy about loss has become my own. The person we lose cannot become a taboo subject. Holding in our pain is also holding in our memories and ultimately the joy that person brought us. I knew about my aunt, uncle and grandparents long gone before I came along because of Daddy. They are etched in my heart as though they told me their stories themselves.

My children talk freely about their brother. They laugh together, imitating him and remembering. The way my children talk about their brother assures me that their children will know their Uncle Jordan. And one day in the distant future, I pray that I'll live to have my grandchildren sitting at my knee as I sat at my father's and have them ask to hear about their uncle, my son. Without hesitation I will openly, wistfully, freely say his name. 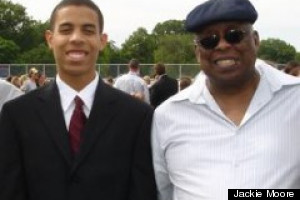