As we've previously discussed, Senator John McCain hates him some "net neutrality." And so, he's introducing the "Internet Freedom Act of 2009," that would give telecoms the "freedom" to turn the "internet" into a confounding and baffling ordeal that would suck, into infinity. Net neutrality, which McCain, inventor of the Blackberry, wants to do away with, would keep internet service providers from favoring some content packets over others. To borrow an example elucidated by Boing Boing's Xeni Jardin, net neutrality is what prevents Time Warner, a provider, from slowing or blocking access to MSNBC in favor of CNN.

What would life be like under the "Internet Freedom Act?" Well, one Reddit user created an image that depicts the "worst case scenario."

John Biggs at crunchgear says, "this sort of bundling is a favorite pastime of most stream providers. For years voicemail was a privilege, not a right, and there are still grannies out there renting phones from the phone company. While month-to-month the costs might not seem like much, this sort of thing adds up to delicious profit." Over at Gizmodo, John Herman adds:

And before you dismiss the chart outright, check out your cable company's channel packages. Replace content provider fees with new network backbone charges, and cable packages with traffic or website packages, and hey, look, shit--this doesn't seem so crazy, does it? 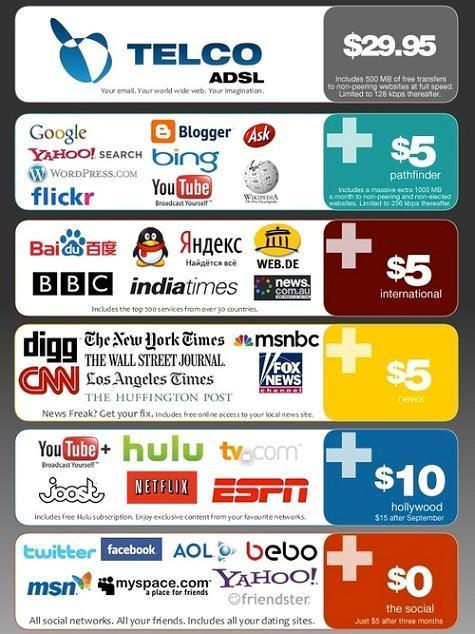 RELATED:
This is what it sounds like when Net Neutrality dies [Crunchgear]
Losing Net Neutrality: The Worst Case Scenario [Gizmodo]