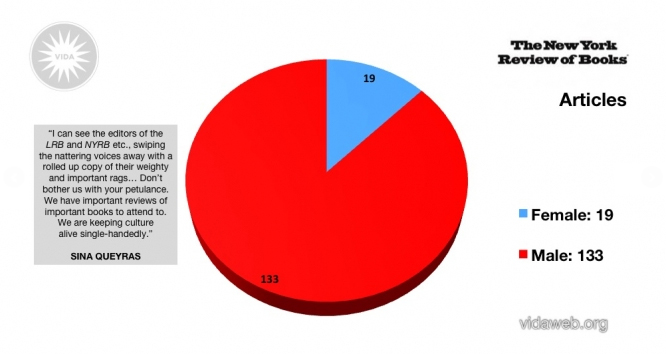 Over at the Columbia Journalism Review my latest column takes a look at gender disparity in top "thought-leader" publications, as compiled by the nonprofit VIDA: Women in Literary Arts.

For those unfamiliar with "The Count," as VIDA calls it, the numbers are shocking. At the Atlantic, women wrote 64 articles in 2011, while men wrote 184. The overall percentage of female bylines dropped 1.5 percent from last year, when the numbers were 52 to 158.

Though a few outlets, like the New York Times Book Review and the New Republic, increased their female bylines, to 34.42 percent and 20.16 percent respectively, overall, in the past year, we've crawled backwards...

Read the this column in its entirety at the Columbia Journalism Review.