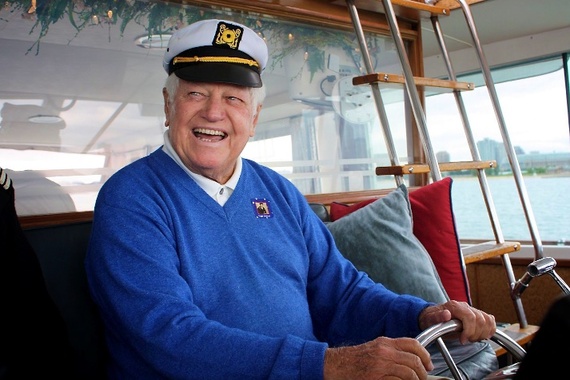 It was five in the morning yesterday in La Grange, Illinois -- and I was walking through an absolute wonderland of snow, blanketing the wise-old elm and maple trees that proudly frame family homes in the quiet of the early morning of my childhood hometown.

I could taste Chicago in every single flake of snow that drifted through the crisp air. Everything was right -- except for the reason I was standing there. I was heading to my father's home in town -- where he passed away during the night.

I was his namesake ... Jim Dunne was born on the eve of the Depression, a 7th generation Irish Catholic Dunne from the west side of Chicago. 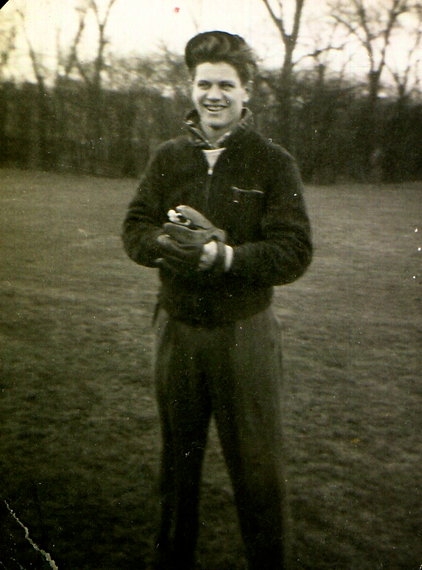 The Dunnes before him of Chicago whispered confidence in his ear as a teenager at 108 Mayfield Avenue; the boat-builder sons and daughters of Patrick William from Ireland that chanced fate and slept on the bottom of a timber boat to cross the Atlantic for new dreams and a better life.

My Dad heard the whispers of the tradition of all the Dunne priests and the Dunne writers that spoke to the heart of a new city and an America that yearned for a better day.

His feisty mother, Josephine Martin Dunne, who lost her husband early and worked to help raise her kids alone -- fueled my Dad's soul with an Irish fire and will. 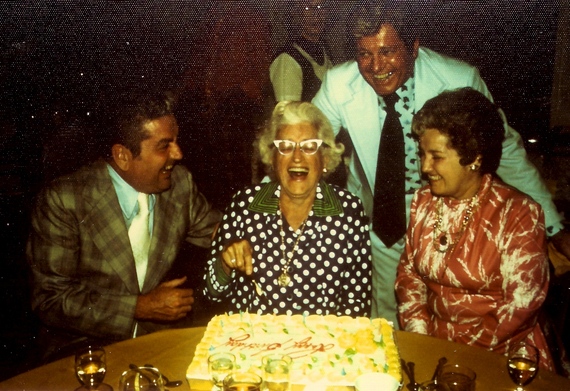 He played stickball all summer long as a kid on empty tennis courts at Columbus Park with lifelong, loyal pals that chipped away at life, and love and careers with him till the night before his death. 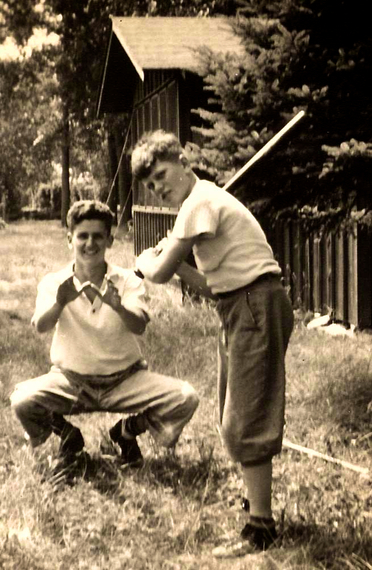 He did the smartest thing he ever did ... he fell in love with the neighborhood catch that lived only blocks away, Joan Lawley -- absolutely stunning and a Class Officer from Rosary College. 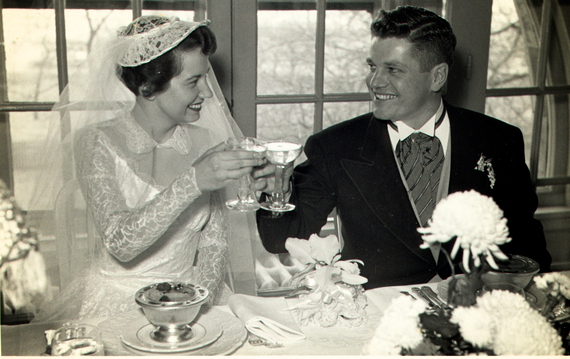 "First comes loves, then comes marriage, then comes seven babies in a baby carriage." They lived below my Nana in a simple two flat and started a family -- praying that his entrepreneurial career would evolve to meet their growing needs. I was the fourth-generation Dunne to live in that duplex. 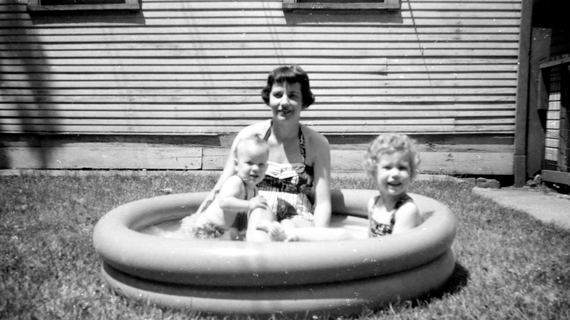 My Dad would let off steam with his Irish pals at their watering hole and sanctuary -- "Ye Olde Shilleleghs" Bar.

Dad boldly moved their family from the city to a home in the suburbs of LaGrange where he didn't know a soul; hoping to follow in his ancestor's footsteps of finding a better life for his wife and kids. 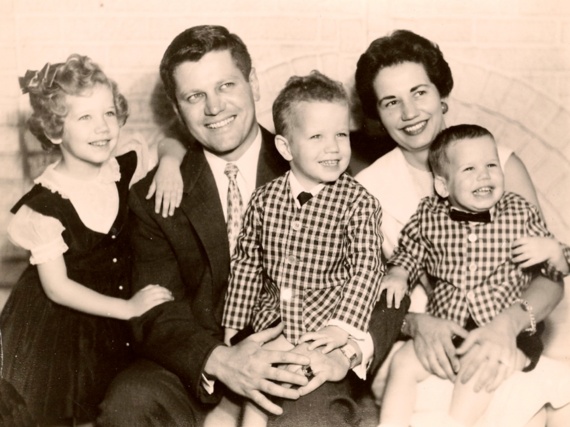 He became Vice President for Transtate Oil Corporation, a Chicago heating oil business, and put in enough long hours and sales wins to risk buying the company. Dad created Dunne Oil Company, building it into one of Illinois' most successful heating oil companies -- serving homes, churches and businesses throughout the city and suburbs. A prominent voice in his business community, he was the Director of the Oil Heat Marketers Association among many other organizations. 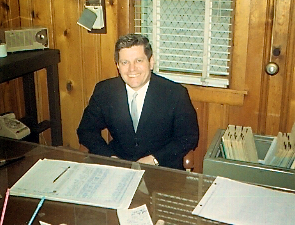 Mom and Dad rolled the dice again, and needing more room, and we moved across town into one of the larger homes in LaGrange ... I can remember walking through that grand LaGrange home (with indoor air conditioning!) for the first time with my Mom and Dad like it was yesterday.

(My youngest brother, Marty, bought our family home from my parents -- where I'm staying this week. I'm in the guest room on the third floor -- in the same room I had as a teenager.) 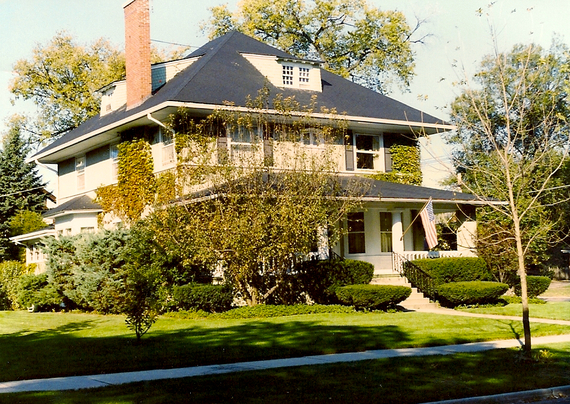 Before every sporting match, before every 6 a.m. mass as an altar boy, before every school day, before heading out for every winter, spring, summer and fall job -- when I'd walk out that back kitchen door my dad would give me the same ol' pep talk with a big smile on his face to go out there and "Be a Dunne."

Dad taught us all every sport known to man. We logged a zillion hours throwing baseballs at Gordon and Sedgwick Park, hitting golf balls at "Easy Aces" Par Three, shooting hoops in the backyard on winter nights under the garage lights, and countless journeys to Chicago to watch the gods at Wrigley Field, Soldier Field, Chicago Stadium and Comiskey Park.

Dad didn't sit on the sidelines; he was tremendously involved in our parish and school. We didn't live in a town -- we lived in the parish of St. Francis. Dad was the school's Athletic Director forever, creating many youth-orientated initiatives that still go on today. He started a suburban church basketball league for all the kids that didn't make their grammar and high school teams, and was the 'Jack Brickhouse' of Little League baseball games barking out the play-by-play in an old, green booth above the home plate backstop.

He taught Catechism Class, and I can't tell you how many kids have had "Dunne Oil" across the back of their baseball uniforms over the years. With young girls of his own, he was a champion for the girls' softball leagues -- and the La Grange Pet Parade wasn't the same if my Dad wasn't front and center waving and driving his 'baby blue' Eldorado Cadillac convertible. 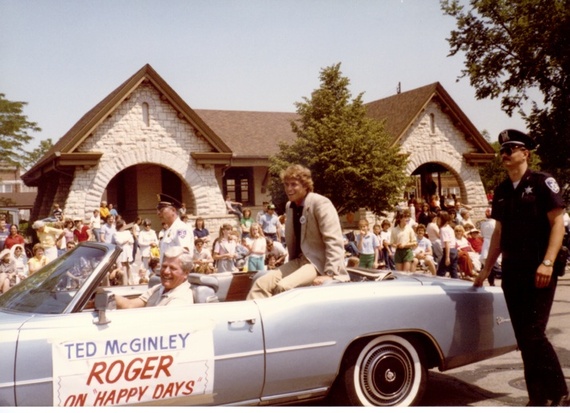 He was always, always there for families and kids in any kind of need -- he paid attention, and he did something about it.

Our 'eighth child' was Timmy O'Connell -- a special needs teenager from down the street that spent every single day at our home -- and loved his second dad, "The Captain-O," as Timmy would proudly call him. Chicago St. Vincent de Paul Society helps needy families experiencing tough times -- ask them if my Dad made a difference...

Norman Sims, on my eighth grade basketball team and in the only black family at St. Francis, walked home with me every day after basketball practice. But he'd drop me off and keep walking to 'the other side of the tracks.' My Dad was his mentor and confidante -- who encouraged and toughened him to make sense out of the prejudice and racial slurs stinging him every day.

What my Dad said during those years to us was one thing. What he did -- stuck forever to the side of our ribs. Principles. Character. Integrity. Those were the tenets of my Dad that were etched in every single decision and thing he did.

Three nights ago, with his kids and my Mom around him at his bedside, I began playing "When Irish Eyes are Smiling" on a little keyboard in the room -- and he immediately woke and sang along ... He told us all how he didn't want to leave us. With his eyesight almost completely gone, he looked over to my Mom holding his hand. He said, "Momma, I need to see your face." Crying, she stood up to be only inches from his face. He looked in her eyes and said, "You're so beautiful. And I've lived a beautiful life ... Because of you." 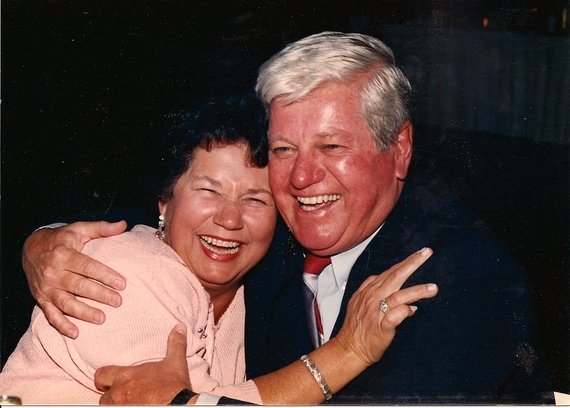 It's now sunset, and the snow has settled in a bit. It's starting to hit me how I'm missing him. How I can't call him on the phone. How I can't stop by and see him and hear how happy he is to see his buddy.

My Dad mattered. My Dad loved life so, so much.

How blessed we were to be touched by my Dad.

My buddy. My hero. My namesake.

Hit songwriter of 28,000,000 records, a modern-day Renaissance Man, husband and a dad of two girls in Pacific Palisades, California