An estimated 5.2 million Americans of all ages have Alzheimer's disease.

As of Friday, December 13, 2013, that number dropped by one when my 77-year-old mother passed away after a 15-year battle with the savage disease that day by day, drip by drip, like a leaky faucet, strips a person of their identity.

That's what my mother would say if she were alive today, and her mind had never been tangled by beta-amyloid plaques that strangle nerve cells and synapses to death as the plaques clump in the brain.

The word was a polite way to curse so as not to teach her 12 children epithets that they might repeat in school or in a public place, like a grocery store.

Yes, my mother had 12 kids. My father is still surprised by the enormity of his family. Reading my mother's obituary, which he wrote, he stopped after reading through the list of his 12 surviving children and chuckled, "God, that's a lot of kids."

Why did my parents have so many children? (They both swore they understood how condoms worked.) Life can be a lonely existence. My mother grew up with one brother, estranged, and a mentally ill mother. I have no idea about my mother's father. She spoke little about her childhood. She was essentially raised by her grandmother. I figure that with each child my mother bore, a bit of that loneliness chipped away.

I'm often asked, "Hey, Ed, what was it like to grow up in such a big family?"

Twelve times the upsets. Twelve times the joy. Plus, really, really big jars of peanut butter, and oatmeal boiled in a pot so big a caterer might use it to prepare spaghetti for a banquet. When my mother purchased ice cream, sometimes she'd buy it from an ice cream store, by the tub-full. In high school, I had a crush on a girl who I swear only came over to my house to watch the circus that was my family. She used to marvel at all the boxes of cold cereal -- at least 15 at any given moment -- lining our cupboards.

My mother adored her children. 12 kids times 12 grades times a 180-day school year is way more than 25,000 pb&js and chunky cheese sandwiches slathered in mayonnaise. To save money, she bagged those lunches in used, plastic Oroweat bread bags, rather than brown paper bags, our fruit always covered in breadcrumbs. (Ungrateful, most of us threw our fruit away.)

In the constant chaos that circulated inside our yellow house at 3650 Witham Hill like some sort of low-pressure system, my mother's blood pressure rose on a regular basis.

Shitwa released the pressure. The swear word could be used if the dishwasher sprung a leak, or if the washing machine broke from a stream of constant laundry back in the day when diapers were made of cloth.

She spoke the word for more serious offenses, too. A sixth-grade brother of mine sneaks out of the house and he and a friend drive a car into a garage.

That deserves an "Oh, Shitwa!"

Take the mischievous shenanigans your 2.06 children commit, multiple it by six, and you have the stress my mother endured:

That's not even the half of it. The interminable worrying my mother endured. "Oh, Shitwa!" What my siblings and I put her through.

Maybe this cacophony of stress accelerated the disease cycle and led to early-onset Alzheimer's at 62.

Watching a mother slowly lose her mind to the point where she no longer recognizes her children is enervating. The progressive collapse of mind, and therefore the body, is pathetic. The teeth can no longer be brushed, making one wonder if there is more plaque decaying the gums than what's suffocating the brain. The fingers begin to close, leaving a permanently clenched fist, despite the ritual of clawing night braces to the hands. The body declines to the point it can no longer support itself, so my mother is placed in a merry-walker, which looks like one of those walkers for toddlers, only bigger.

There is nothing "merry" about a merry-walker.

The shadows are worse. An Alzheimer's patient begins to see shadows once their mind dements, some real, while others appear and disappear like ghosts in the night -- dead relatives returning for a visit or simply paint on a wall forming a scary shape seen by glossy eyes.

Every 68 seconds, an American develops Alzheimer's. It could be you, a beloved parent or sibling. A slab of saliva swabbed for a home DNA test revealed only 4 percent of the population has a higher probability of coming down with Alzheimer's than me.

We finally realized my mother was sick when the yellow sticky pads reminding her where she put her keys were not fixing this problem. We took her to run some tests.

Count backwards from 100 by threes. I believe my mother made it to 91 before she became flustered.

Alzheimer's is the sixth leading cause of death in the U.S. Fearing the end was near, the neurologist told my parents, "You better take that dream vacation."

My mother took a series of dream vacations to Paris, Florence and to Reykjavik, where I was living when she was diagnosed. We took a whale-watching trip where a humpback swam beneath our restored, wooden fishing boat, and my mother, afraid of heights, climbed to the crow's nest.

On her dream trip to St. Croix, the plane blew out an engine. Amongst the panicking passengers, my mother stoically sat. The woman next to her was losing it, so my mother, exhibiting the tenderness used to nurture all of her children, calmed her seatmate, most likely singing "You Are my Sunshine," which she sang to all of us over and over again to help us fall asleep.

The neurologist was wrong. My mother didn't lose her mind quickly. She gave birth to 12 kids (the last ones, identical twins, at 42). This woman was tough. Alzheimer's was in for a fight.

But there is only one winner when a patient takes on Alzheimer's. The body and mind lose horrifically.

When the knots and tangles in her brain stole her ability to formulate sentences, she hung on to the words, "I love you." With her default personality set to nurture, it's fitting that this was the final complete sentence she would ever utter.

She spoke it routinely. She said, "I love you" to everyone who visited, whether family or not. She said it to the saintly caregivers at Lydia's House. In the dark quite of the night when she was wide awake, I'm sure she also said those three words to the wall, or dresser drawers, even to the shadows who visited her.

Eventually, she stopped speaking. Words were replaced by guttural grunts and mumbles.

She wasn't eating or drinking. The caregivers waited two days for a change. Then they called hospice. My siblings and I raced back to Lydia's House, some showing up too late because what was supposed to be a 10-day hospice stay lasted only one day.

My mother wasn't alone when she died. Five of her children made it to her bedside and sang, "You Are my Sunshine" to her as she breathed her last breath.

Stuck in transit at a European airport, I didn't return on time. I fondly remember our last visit when I brought my mother a chocolate shake from Dairy Queen and she downed that shake like nobody's business.

I regret every day I didn't visit her. I regret the loss of time. After 15 years, I thought time would wait. Bob, my mother's nurse, estimated that damn 10-day goodbye.

I'm haggard, heavy. The circles under my eyes have darkened, proving I'm years older today than prior to 13 December. At the same time, I feel like a frightened 10-year-old boy looked after by a babysitter he doesn't know. My gut is shattered. I have trouble swallowing. I'm constantly exhausted, despite sleeping 10-plus hours each night.

How does a boy get over the loss of his mother? I suppose he never does. My siblings and I will manage to cope, like children do everywhere. Time as a salve.

My mother didn't lose her ability to swallow, what eventually kills so many Alzheimer's patients. Bob the nurse told us that she refused food and drink. She was ready to go. After 15 years, she had had enough of Alzheimer's. She ended this life on her own terms.

In a brief moment of clarity, something inside her said "Shitwa!"

After removing her measly belongings from her room -- a rocking chair used years ago to feed and quiet us as infants, a few photo collages of children she had been long unable to recognize, a boom box which played a CD of hospice music in her final hours, a few ponytail ties with strands of her gray hair still clinging to the ties -- we left Lydia's House.

Outside the facility, beneath the carport, overhead light not working, we said one group "Shitwa!" Upon her favorite word's release from our mouths, the light flickered, and then, like either a sunrise or sunset, burned bright orange.

I have no understanding about what happens to our souls after they outlive our bodies. It's far too complicated for me to comprehend. I believe the orange glow was my mother. Free from the ravages of Alzheimer's, she recognized her children once again, and told us one last time that she loved us.

And nobody can tell me different. 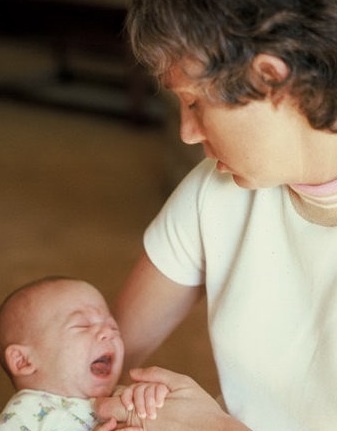 PHOTO GALLERY
7 Tips For Caregivers
Download
Calling all HuffPost superfans!
Sign up for membership to become a founding member and help shape HuffPost's next chapter
Join HuffPost
Voting Made Easy
Register to vote and apply for an absentee ballot today
Register now

Free From Alzheimer's: An Elegy
7 Tips For Caregivers