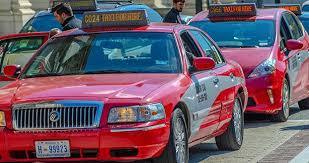 A true story from this past week.

I spun around suddenly, a few steps into the hotel lobby, realizing I had just left my briefcase on the back seat of the cab. The taxi was no longer in the drive outside, and instantly - suddenly without every essential I had transferred from pockets to case for ease of passing through airport security - my mind began to reel with all I would have to do to reconstitute normal life.

The doorman, who must have recognized my look of dismay, appeared by my side, asked what I had lost, ran out into the street, and appeared again a few moments later to help me call the cab company. Sunday - no dispatcher on duty, a voicemail system like a labyrinth of blind corners all leading to dead ends, nobody there at all.

"Let's go talk to the drivers."

No cars from the same company in the queue outside the hotel, but the driver of the first cab in the line, hearing I had come in from the airport, said there was a good chance my driver was on his way back there, and offered to take me to the holding garage.

The holding garage is a part of taxi-driving life passengers generally do not see, but where cabbies who work the airport circuit frequently spend the longest stretches of their day, waiting to be released, in the order of their entry, back out to the terminals. The wait is unpredictable for the drivers, and something of a financial gamble, the outcome determined by the fare one happens to get when one's turn comes up. Past the entry gate, no u-turns are allowed.

Passengers are not permitted in the holding garage, but the two drivers just exiting as we arrived - the ones right at the end of their long wait - pulled their cabs to the side, let others pass them, took my receipt in hand, and went on foot into the depths of the garage to look for the car with a corresponding registration number and for a driver with the wispy goatee I had described. A long wait - no luck, and, remarkably, no hard feelings. On the contrary, the two returned with increased resolve, as they handed my receipt to the holding garage dispatcher, along with several scraps of paper for her, and words of encouragement for me.

The dispatcher at the gate of the holding garage, the enforcer of its rules - which she had bent to allow the two drivers to become my champions, and by inviting me into her booth to stay warm while waiting for them - called her supervisor over to take her place, and went to make at least four calls from his telephone, so far as I could see through the wide plate-glass window of his office.

Someone she called phoned someone else who knew a cellphone number - and it turned out my original driver had noticed my briefcase on his backseat about halfway through his return drive to the airport, and had exited the highway to circle back to my hotel. (The alternative, as the supervisor at the holding structure explained, would have been to feed my briefcase, come Monday, into a central Taxicab Commission lost-and-found system reputed to be uncertain and backed up.) Now the driver circled around again to come bring my briefcase to me at the holding structure.

Here is the part I find especially worth mentioning - and really why I am telling this story. The doorman at the hotel was from Lebanon, the cabbie who took me back out to the airport was from Morocco, the two drivers who searched along the rows of taxis snaking through the holding structure were Arabic-speaking (I didn't take more of their time to find out exactly from where), the attendant at the gate of the holding garage was from Malaysia, and the driver who handed my briefcase back to me was from Somalia. For that matter, I am Canadian, and all but one of my grandparents spoke English with accents from elsewhere, comparably heavy to the ones I heard throughout this odyssey - and it bears mentioning that I was wearing a big crimson yarmulke during the whole adventure. And two days later I was listening to a speech (if one can call it that) by a politician (if, doubtfully, one can use that word of him) who recently had described immigration as turning the U.S. into a "dumping ground," had called for "a complete shutdown of Muslims entering the United States" and said about new arrivals from Central and South America, and the Middle East, "They're not sending their best. They're not sending you, they're not sending you. They're sending people that have lots of problems, and they're bringing those problems with us [sic]. They're bringing drugs. They're bringing crime. They're rapists. And some, I assume, are good people. But I speak to border guards and they tell us what we're getting, and it only makes common sense, they're sending us not the right people."

I was listening via live-feed from my hotel-room, rather than in the conference's stadium, because I could not bring myself to be anything like an atom of wind in that candidate's sails.

At the start of this week's Torah-portion, we read of the 'olah, the 'ascending sacrifice.' Consumed wholly in the flames of the altar, its remnants burning through the night, no part of it is reserved for the celebrants as is the case with other sacrifices. Interpretive tradition associates this particular sacrifice with purity of thought and spirit - it is wholly an offering. Of course I have tried to give back in some way to each of the people who helped me along the course of this briefcase-story - but that's not why they did what they did. In each case the voluntarism was entirely an offering. And there I was, not an hour later, on time for my first meeting, with my briefcase, entirely thanks to them.

What did the amazingly kind people who composed this minor miracle remind me?

As we read in the prophetic selection paired with our reading from the Torah this week:

Even without the counterpoint of prejudice and bombast from the absurd and frightening presidential candidate, it was a striking and worthwhile reminder.