What goes through your mind when you realize you dropped a $20 bill on the sidewalk? Most likely, it's that your money is gone forever. Probably picked up by some lucky pedestrian who pocketed it, assuming there was no way to find its rightful owner. Chalk it up to city living.

But if you're one of the 13 million people living in Tokyo, you have a nearly 75 percent (74.1%) chance of that money being turned in, and then returned to you.

Tokyoites turned in ¥3,162,889,322 in cash last year-- that's almost $30 million U.S. dollars. Picked it up off the street or subway seat and took it to a police station, where it was entered into the Tokyo Metropolitan Police Department Lost and Found Center system.

More than one in five of all items lost in Japan go through the TMPD system--last year that amounted to 3,390,000 missing gloves, umbrellas, wallets, phones and other possessions. Since 2000, there's been an uptick in the number of items turned in, a fact the TMPD attributes to smaller technology allowing people to carry phones, laptops, electronic subway cards and other objects that were previously left at home or didn't exist at all.

Tokyo's lost and found procedure was established in 1881, right after the Metropolitan Police Department was created. Back then officials passed by every police station to collect the lost items in a horse and carriage, but the straightforward process remains essentially the same today, and is predicated on Tokyo residents' fondness for delivering lost property to authorities.

Some misplaced objects are stranger than others. What happen to the person whose wheelchair was turned in? How exactly do you forget your dentures on a train? And wouldn't you be more careful if you owned a golf bag full of gold clubs? 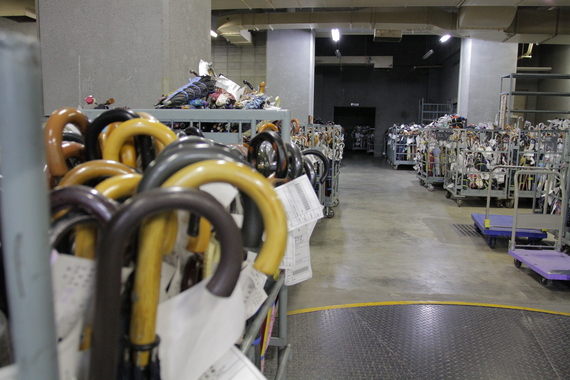 But most items brought into the center are everyday things: scarves, IDs, glasses, handkerchiefs. Far and away the single most common item lost is the umbrella. 357,935 last year to be exact, and each and every one was tagged, cataloged on the Lost and Found Center website and stored for three months to await their owners. A warehouse-sized room at the Lost and Found headquarters houses tens of thousands of umbrellas at any given time.

So what's behind this Japanese propensity to turn things in instead of keeping them for themselves? Is Japan just an intrinsically moral country?

TMPD Lost and Found Center manager Harumi Nakano attributes it to three things. She explains, "I think the person who finds the object immediately thinks that the person who lost the item must be in trouble and feels that it must be returned. Also, when Japanese people are young, they have been educated at home and at school that whenever you find an object you must take it to a Koban (neighborhood police box) or a police station. Finally, the fact that there are Koban everywhere facilitates the return of an object." 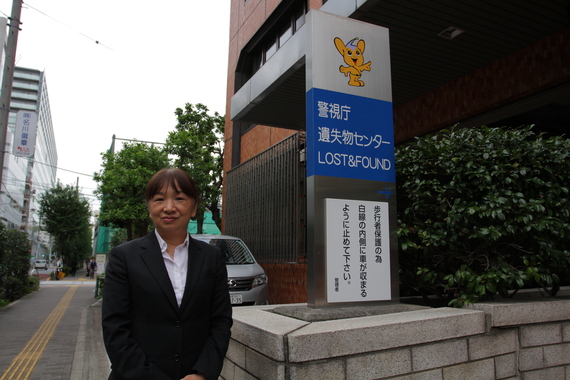 Elementary students are instructed how to return things in "Do-toku" class, which teaches basic morality and ethics. So from a young age Japanese are taught to think of their fellow citizens before themselves, and it's this attitude that makes the lost and found system effective, even in bad economic times. The impulse to return items is so ingrained in Tokyoites that 10 percent of objects (313,335 items) turned in last year were "waste" or food that went bad before anyone could claim it.

And all this ethical behavior isn't without potential reward. When you return an item, you may still get to keep it -- bad-karma free. If in three months no one claims that cash, jacket or other item you turned in, you become the rightful owner and can choose to pick it up or not. The TMPD mails a postcard to your house to inform you. This happens in just under 15 percent of cases of cash, and 46 percent of all objects turned in.

Anything you don't want becomes property of the Lost and Found Center, which contracts out the work of selling any items without personal information on them, and the profit goes into the Tokyo city budget.

As great as this system sounds, all this Japanese morality could actually land you in trouble as well. Any bag or wallet brought to the Lost and Found Center containing illegal items such as drugs is turned over to the police. No word on how many owners come forward to claim that lost property.