Last week I re-posted the story of Lost Bird, the infant girl who was found alive beneath her mother's frozen body four days after the Massacre of Wounded Knee on Dec. 29, 1890. Named "Zintkala Nuni" -- "The Lost Bird"-- by the tribe's survivors, who tried to get custody of her, she was adopted-- as a public relations move -- by Brigadier General Leonard W. Colby, whose men came to the killing field after the massacre was over. In her short life,"Lost Bird" suffered every kind of injury and abuse the White Man imposed on Native Americans. She died on Valentine's Day in 1920, aged 29, and was buried in a pauper's grave in California, but 71 years later, her people, the Lakota, found her grave and brought her remains back to Wounded Knee, the place where she was found as an infant beneath her mother's frozen body.

The reason I re-posted her story last week was that I received a letter from Brian George, a Native American who lives and works at the St. Joseph's Indian School in Chamberlain South Dakota. In our correspondence I was moved and delighted to learn that he honors Lost Bird every year at her grave and keeps her memory alive among her people 95 years after her death. Brian has given me permission to quote from the emails we've exchanged, and he promises to tell me more details of his experiences -- sensing her presence during his pilgrimages to her grave -- when he travels to New England next summer on business.

While researching Lost Bird, I came across Lost Bird: Survivor of Wounded Knee, Betrayed by the White Man. Thank you for sharing her story for the world to view and know. I have a special connection with Zintkala Nuni. I am also Native American, Chickasaw and Choctaw, from Oklahoma, but have worked here at St. Joseph Indian School in Chamberlain, South Dakota for 5 years. St. Joe's is on the very same grounds Zintka went to school at Chamberlain Industrial Boarding School from 1904-05. She very much liked it at this school. One of the few bright spots in her life.

Every Valentine's Day (day of her death), I go to Wounded Knee and take flowers and tobacco prayer ties for her. I spend some of the day with her in prayer. I am a cynical person, but have had many unexplained happenings while visiting her. These things are not scary, but comforting to know her spirit is still very much alive and I have always had witnesses with me. In two weeks I will be visiting her again.

Please don't think I am some off-the-wall person. My job at the school is Major Gift Officer, but I started as a houseparent raising 12 Lakota children at a time. I can say that I have helped raise 12 teenage girls at once. Quite the experience, but I survived and have wonderful relationships with them to this day."

I wrote back to Brian saying I was eager to hear more about his visitations with "Lost Bird" and he wrote back an email that I found inspiring, so I'm quoting it here in part, along with the photo of the tattoo that he wears to remember her--and why he has it. 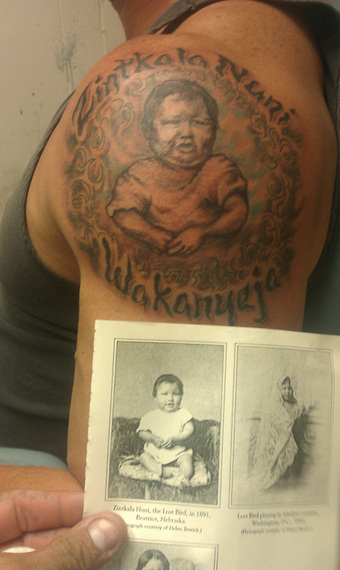 "I have attached a photo of Zintka on my shoulder. Under her picture is the word, Wakanyeja, which translates in Lakota as " children are sacred" or "children are a gift." I have never wanted a tattoo in my life until my connection with her. I was 49 when I went to Pine Ridge and got the tattoo about 12 miles from where she was found. The artist freehanded the tattoo from a picture in the book. A Lakota artist had to do the work of someone so sacred in Lakota history.

Why did I get the tattoo? Every morning as I brush my teeth and I do mean EVERY MORNING, I look at the tattoo and think of all the hardship and tragedy she experienced in her short life and make sure I do everything I can each day so that our 212 young Lakota students don't endure the same. I have tried to turn her tragedy into an inspiration. The Lakota children desperately need positive, strong and influential Native role models. My passion in life is empowering, motivating and mentoring our next generation of leaders in Indian Country. The values of work ethic, integrity, resiliency and self-determination are some of the traits I mentor to our students. I believe Zintka knows that all my waking hours I am about helping the Lakota children and she is my guide.

No one should have to live the life Zintkala Nuni lived. Living 30 minutes away from some of the poorest reservations in the country, I see the endless cycle of poverty, addiction, suicide and abuse. Almost a feeling of hopelessness. However the people are resilient, strong and have that special Native sense of humor. They are survivalists.

I call the reservations in our country, "The Forgotten America." We don't have a third world country in our backyard. It's in our living room!

I believe Zintka is my "guiding spirit" and after I share my stories I'm sure you will agree. Even the spiritual journey about how I arrived in South Dakota from Oklahoma 5 years ago is incredible.

Generosity is the Heart of Native America !

I'm grateful to Brian for sharing his experiences with Lost Bird and her descendants, and for his eloquent testimony about what she means to him and to the Lakota children. I'm looking forward to meeting Brian in person this summer to hear about his visitations with Lost Bird first hand, and I'll definitely share them with you on this blog.