Of all the stories I've uncovered while researching antique photographs in my collection, this one is the most heartbreaking. Starting with the Massacre at Wounded Knee on Dec. 29, 1890, "Lost Bird" suffered every kind of injury and abuse the White Man imposed on Native Americans. She died on Valentine's Day in 1920, aged 29, and was buried in a pauper's grave in California, but 71 years later, her people, the Lakota, found her grave and brought her remains back to Wounded Knee, the place where she was found as an infant beneath her mother's frozen body.

I first posted this story on my blog "A Rolling Crone" in 2012, but am re-posting it now because I recently heard from a man, a Native American, who has been visiting "Lost Bird's" grave with flowers on the anniversary of her death for years, and feels he has had spiritual communications from her. I'll tell his story in a subsequent post. 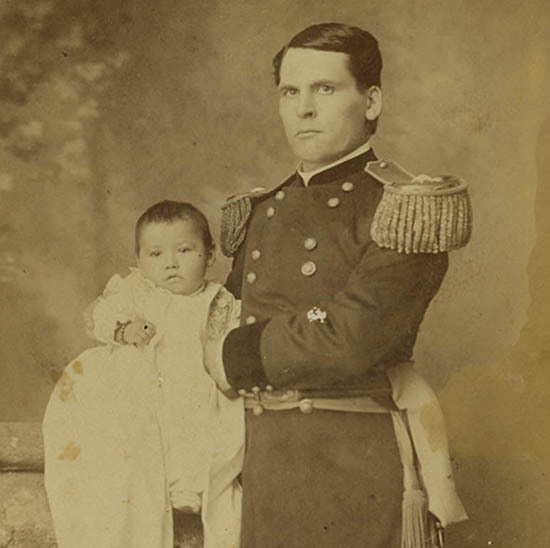 This antique photo (detail above) is the most expensive and I think the most interesting one in my collection. It's an Imperial -- which means a giant version of the cabinet card -- and measures about 7 by 10 inches; an albumen print mounted on decorative board. It was taken in Beatrice, Nebraska by a photographer named Taylor.

As you can see, the photograph shows a handsome, stern-looking military officer in a general's uniform holding an adorable Native American baby. The officer is Gen. Leonard Colby who adopted this baby and had the photograph taken -- as a public relations gesture.

This baby girl was found alive beneath the frozen body of her mother four days after the killing of hundreds of Lakota men, women and children on the Pine Ridge Reservation in South Dakota on Dec. 29, 1890, in what came to be known as the Massacre of Wounded Knee. On the infant's head was a leather cap decorated with beaded designs showing the American flag.

She was named "Zintkala Nuni" -- "The Lost Bird" by the tribe's survivors, who tried to get custody of her, but she was adopted -also as a public relations move -- by Brigadier General Leonard W. Colby, whose men came to the killing field after the massacre was over.

Over the protests of the Lakotas, he adopted the child, claiming that he was a full-blooded Seneca Indian. He promised to bring food to the surviving tribe members if they'd give him this living souvenir of Wounded Knee. Then he had this photograph taken. On the back Colby wrote in lead pencil on the black cardboard, words which are now nearly indecipherable:

".....baby girl found on the field of Wounded Knee...mother's back on the fourth day after the battle, was found by me. She was about 4 or 5 months old and was frozen on her head and feet, but entirely recovered. The battle occurred Dec. 29, 1890, about fifteen miles walking from Pine Ridge, South Dakota."

Gen. Colby adopted the baby without even consulting his wife, Clara Bewick Colby, who was in Washington D.C. at the time, working as a suffragette activist, lecturer, publisher and writer. The well-meaning adoptive mother brought the infant to Washington where Zintka, as they called her, grew up, buffeted by all the current social trends of the time -- women's suffrage, rejection by her own people, exploitation of her background by Buffalo Bill's Wild West Show, early silent films and vaudeville.

As an adolescent, longing to return to the West to learn more about her origins. Zintka went to Beatrice, Neb., to live with Colby, who by then had left his wife and daughter and married her former nanny. The girl may have been sexually abused by her adoptive father, because she became pregnant under his care and was shipped off to a prison-like home for pregnant women. Her infant son was stillborn but the girl was confined to the reformatory for another year.

Zintka returned eventually to her mother in Washington, then married a man who infected her with syphilis. She tried different careers, including working with Buffalo Bill's Wild West show, which exploited her Native American background. She tried to work in vaudeville and the early movie business--dressed as an Indian, of course -- and reportedly may have worked as a prostitute as well.

Zintka had two more children -- one died and she gave the other to an Indian woman who, she felt, could take care of him better, because she and her ailing husband were desperately poor.

She fell ill in February of 1920 during an influenza epidemic, and on Feb. 14, Valentine's Day, "Lost Bird" died at the age of 29 of the Spanish flu complicated by syphilis. She was buried in a pauper's grave in California.

The only bright light in Zintka's story is that her bones were exhumed in 1991, seventy-one years after her death, by the Wounded Knee Survivor's Association, to be returned to the battlefield and buried with great ceremony while news media and hundreds of Native American descendents watched. A Lakota woman said,

"Lost Bird has returned today to the same place she was taken from. This means a new beginning, a process of healing is completed. We can be proud to be a Lakota. To our sacred children, this means a beginning."

The story of Lost Bird is so steeped in irony that it reads as a fable of the exploitation and torture of the Native Americans by the white invaders. On her own trail of tears, during her short life, Zintka was robbed of her name and her mother and any opportunity to learn about her own culture. Despite her adoptive mother's love and good intentions, she was terribly unhappy--prevented from going back to the West to find her kin and then sexually abused when she did return to the West. She was exploited and stereotyped by the film and entertainment world, eventually to die before she reached 30.

Lost Bird's story has been told by Renee Sansom Flood in the 1998 book "Lost Bird of Wounded Knee: Spirit of the Lakota", and Ms. Flood also spurred the effort to find Zintka's grave and bring her home. The author was a social worker in South Dakota when a colleague showed her a faded photograph that set her out on her years of research and writing. That photo, found by the woman working with Renee Flood in an old trunk in her late father's attic, was the same photo I own today -- with Colby's writing on the back. Renee Flood became so obsessed with telling Lost Bird's story and bringing her home to be buried with her people that she had recurring dreams of the little girl until she fulfilled her obsession.

I know that owning this historic photograph is a serious responsibility. I, too, would like to spread the story of Zintka's sad life. The story of Lost Bird is a vivid illustration of how a faded old photograph, over a century old, can have the power to move people to make discoveries long after the subject and the photographer are dead.