At a post-mortem forum on the 2016 U.S. election, Mexico's former president Vicente Fox had choice words for those who elected Donald Trump. Yearning for the manufacturing glory days of yesteryear, American workers were seduced by a sloganeer who promised to "Make America Great Again." But, said Fox, the world has moved on, and their jobs with it. Instead of attending community colleges to pick up critical skills and proficiencies that would have enabled them to transition into jobs of the future, American workers "went home to down a few beers."

A sardonic critique from a politician on the other side of Trump's 'great wall' designed to keep jobs in and émigrés out? Not so.

Donald Trump perpetuated the destructive myth about our nation's infallibility held by many in Middle America, especially workers in Coal Country and the Rust Belt whose family fortunes rose in the 1950's when the United States dominated manufacturing and production while other nations crawled out from under the rubble of World War II. Trump made them believe that the jobs in the factories and mills will magically return with the stroke of his presidential pen.

This is a lie. Fox said manufacturing jobs of the Fifties are gone forever, and the American worker has wasted precious time by failing to get on the train to a better future.

In the years following the World War, defeated and underdeveloped countries (many with their own storied histories of innovation) have leaped over the 20th century and into the 21st, with high-tech infrastructures and ambitious, gritty workforces eager to compete in global manufacturing and commerce. If you need proof, just catch a bullet train out of Tokyo, pass through the airports in Singapore or Beijing or visit a high-tech factory in Tijuana.

Resting on its laurels during the latter half of the "American Century," the United States took a noblesse oblige attitude toward STEM education. Kids with a penchant for science, technology, engineering or math were pejoratively called nerds or geeks. Less rigorous majors became the gentile aspiration of many kids heading into college. Short-sighted state governments have underfunded their classrooms, cut courses that fostered critical thinking and creativity, failed to require a STEM certification for K-8 grade teachers and limited access to STEM literacy courses that would move the entire high school class - not just those kids who were bound for universities - toward meaningful STEM jobs that do not require college.

Meanwhile, American workers, and the governments they elected, remained rapt in Fifties mythology and buying, not making became the false floor of the American economy.

Recently released PISA scores are sounding alarm bells: they show that the United States had an 11 point drop in the average score for math and has a flat score in reading and science. Our ability to compete in the global marketplace is in peril. And even before he takes the oath of office, Trump is steering our ship of state even closer to the rocks.

The majority of Trump's cabinet picks are on record as anti-labor, anti-education and science-averse, with no experience governing in a federal system. Alarmingly, his nominee for Secretary of Education, billionaire Betsy DeVos is openly antagonistic toward public education upon which millions and millions of Middle America's families rely and which she pejoratively refers to as "government schools." DeVos plans to divert our tax dollars to private, religious or charter schools. Education historian Diane Ravitch says of DeVos, "[N]ever has anyone been appointed to lead in the past 150 years who was hostile to public education."

If confirmed, Ms. DeVos will be embolden by a latter day Know-Nothing Congress that has opposed spending on major education reform and investment on our national infrastructure for decades.

I have written that as a matter of national security, we must educate our entire workforce to become STEM literate and proficient in 21st century skills and build a futuristic infrastructure that can sustain competition in a global economy if we are to avoid further economic and societal decline. Trump's democratic opponent, Secretary Hillary Clinton called for a massive retraining program for our workforce and developing an infrastructure to support 21st century enterprise. Trump and Congress needs to heed her call and change their course before it is too late for all of us. 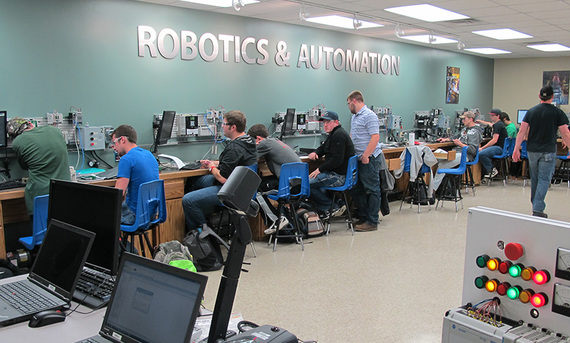 Changing course requires a massive investment of trillions of dollars, and Trump's intention to lower taxes for the rich shows reckless disregard for the future of this country and the working people who elected him. The tax bracket for the wealthiest among us has been in decline since 1956 during the much-vaunted Eisenhower Administration when the top tax bracket was between 80-90%. Today, when our education and infrastructure investment needs are the greatest in history, the highest tax bracket is at 39.6%. Unconscionable.

If we are to regain a modicum of the preeminence enjoyed in the Fifties, we need to pay to play. The top 20 percent of our society must pay a greater percentage in taxes, and tax incentives for businesses should not line the pockets of those in the C-Suite, but create rewards for retraining and hiring local workers of all ages.

And the American worker must accept the realities of global change. Steel worker-turned-HVAC-instructor Dennis Matney said: it is time to pay. He noted that everybody in manufacturing should invest some time in more education. "I think that you can resist change all you like. But it's going to happen regardless. You might as well get with the program."

I Went To A Secret Underground School For Girls In Afghanistan. It's Happening Again.