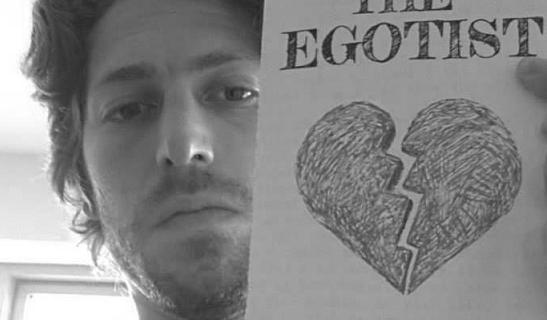 Back in New York, I had never felt so alone. I was angry at the world, a world that had failed to recognize my greatness. My inability to cope with discomfort led me to self-medicate to the point of assured self-destruction. My genetic programming and some poor choices brought on by my environment had made me an alcoholic and prescription drug addict. Nothing was following the neat path I believed my life would follow. New York intellectuals didn't crown me as a genius, although I was not able to push for it the way some of my peers at Bard were able to. The film projects I was working on were hitting and getting stuck in roadblocks, and I was angry when my work on a book that was about to be published left only a small impression on the final outcome of the book, though a lot of the content I had reworked is contained in the pages you're leafing through.

My ego was going through gigantic changes that I had no way of measuring. I was studying Kabbalah, but only from the peripheries, watching half a lesson here and there without a group to support what I was coming to understand. I never considered shifting my point of view enough to become a committed member of a study group. The effort it required didn't make sense to me.

"It sounds so easy to let go of your belief in your control over the universe, but as you may know, lost in the grips of narcissism, the possibility never presents itself. "

I only persevered through life because I knew that my work was good and I knew the screenwriting project I was working on had something to offer the world if it would ever get made, though that was a large if, and even if it did fulfill my criteria of a worthy film, I was still unsure if that was inherently valuable, though my ego definitely wanted that sort of validation. Also, even if the film was made and it was successful, it would only have a small impact on the world. I wasn't aware at the time that the internal changes I was going through would be invaluable to my spiritual growth. I wasn't yet willing to admit that the discernments I made were of any spiritual importance.

I was playing a game as I wrote, half-heartedly method acting for the sake of my ego. Sitting in an apartment, after downing bottles of liquor consistently for days, it occurred to me that even though I was in some ways moving forward with my life, it was all based on a lie I was telling myself. I was putting the best of myself forward by clouding my clarity in substances. It was the only means I knew that could clear the cobwebs. Then it was suddenly clear something needed to change. I felt like death daily. My work was sustained by prescription drugs, and these drugs, which were propelling me to push through, also gave me panic attacks on a near, nightly basis.

After living on my own for a couple of years, I was unemployed and had to move back home for a little while. Then I was kicked out of my father's house, after being let go of an easy job as a barista, making me unable to pay my rent. I was then forced into living in my mother's apartment in the East Village. She was seldom there since she lived in Long Island; I was having a grand time in the moments I wasn't paranoid or too hung over to do anything but watch television with my head stuffed into a pillow.

In spite of my apparent handicap, I got a lot done. I wrote two screenplays, was killing it in school, did a two-month editing job on a book in just two weeks, partied almost every night and acted like a rude maniac most of the time. In a state of disarray, one night, missing my phone and my wallet, I showed up at the doorstep of one of my closest friends. At Georgia's beautiful West Village apartment, I was crying about my newly ex-girlfriend and trying to sleep with the girl I had bothered at five in the morning. I repeat, I was killing it. Having gone from a neurotic to a powerhouse writer in drug-induced states of mania, I felt invincible. Still, every morning when I woke up, I felt like I needed to be hospitalized.

One night, I miraculously felt the desire to get better from this corporeal impediment, after having accumulating a bottle a day, 40-100mg a day Adderall habit (an absolutely absurd number; a man named Stephen Elliot, who I incidentally met a few times during this period, wrote a memoir about his struggles with Adderall doing 10mg/day). My friend Dave was over at my house, and I said, "I need to get sober. Will you go to an AA meeting with me?" I went that night, and I felt the familiar stench of the room--it was my third time trying to do this--and my recovery began. I began to get sober through Alcoholics Anonymous, because I felt completely out of touch with my emotional state. I allowed myself to feel the emptiness in my life for the first time in a long time, and I had opened my heart enough to consider G-d. In order to get sober, I had to look at myself from the outside and compromise my self-centered view of existence. I was a self-torturing being in the center of the universe, and I had to recognize I was only a small part of the universe and that most people didn't care about me enough to warrant my paranoia about them. It sounds so easy to let go of your belief in your control over the universe, but as you may know, lost in the grips of narcissism, the possibility never presents itself.

An excerpt from The Egotist, a book by Jesse Bogner published by Laitman Publishers