What is it about a comedy that draws an audience? It should be funny, that's a given. But perhaps there is something deeper. Something much more mystical that excites the attention of audiences. There is an energy to comedy. Sometimes it feels dangerous or magical or luminescent. When done right, comedy feels how magic shows advertise themselves. It becomes a seductive charisma with an electric heartbeat. It becomes irresistibly magnetic. And people instinctually want to be a part of it.

Lost Moon Radio explodes into art. The comedy ensemble becomes a carnival of sight and sound and spectacle. Their recent offering of Roger Wodehouse's Androgymnasium has a spirit that is incomparable. It is rock and roll comedy that exceeds expectations. The premise itself is fantastic: an iconic, androgynous glam rock star's short-lived children's show. The execution of such a premise can go in many awful directions. Instead the end product is silly while avoiding stupid, edgy without being obnoxious and fresh without feeling forced. The ensemble is a seamless display of talents in absolute cohesion. There is not one misstep to be witnessed by this immensely funny theatrical feat. 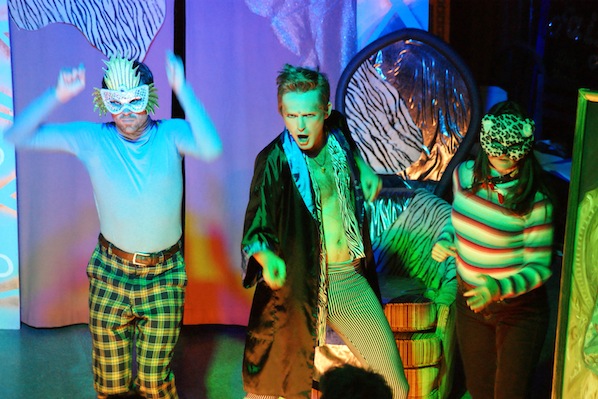 Beyond the flashy, fun-filled good time, there is something to be said for the subject matter. To say transgender is a taboo may be overstating it, but it is definitely an area ripe with confusion and misunderstanding. There were moments throughout the glamorous music and energetic antics where genuine truth existed. Though it was an absurd representation, the theme of the performance remains: be true to yourself. As far as a thematic takeaway goes, the show was a celebration of individuality. A love letter to those letting their freak flag fly high. A rather (dare I say) poignant portrait of not giving a fuck. A masterful piece of pop-culture eye-candy punctuated with laughter and underlined with a wonderful message of it being it okay to be yourself. 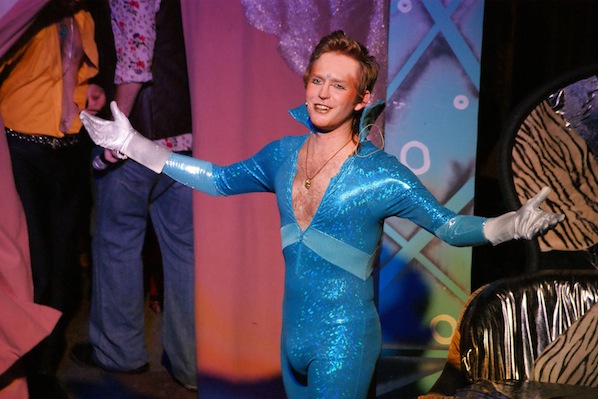 Ryan Harrison is consistently charismatic as the enigmatic title character. Frank Smith delivers performances of shaded comedic nuance with surgical accuracy. Will Maier provides some of the biggest laughs of show as the rock star's best friend and band leader. Lauren Flans dazzles with a wide range of characters, from the infamous German model and singer, Nico to a puppet of a dog that feels more like a cat. (Or was it a cat that felt more like a dog? Species reassignment is whole other world of confusion.) Overall, the ensemble is tight, well-worked group of colorful talents.

So what is it that draws people to comedy? In a word, fun. There are infinite possibilities and factors involved in theatricality. It takes an immense depth of skill to balance and orchestrate those components. The sum of which is enjoyed, but the strategy and direction that made caused it is unknown. Critics can guess at it or (as seen much more often) can declare it as fact. However, for the purpose of leaving that incredible energy to speak for itself, here it will be an ever-mystery. It is somewhere between love and violence that enigmatical act is set free. And that freedom should be experienced firsthand, without outside influence. So seek out the fucking thing, and see it for yourself. You won't regret it.