It's 2:47 on a brilliant school afternoon, and I'm not tearing out of the apartment. Things are different. Pushing my time to the last second was my habit, a countdown to exactly 18 minutes of racing to school to pick up my son, Finn, and years earlier, my older boy, Teddy. But this fall, after a decade of morning drop-offs and afternoon pick-ups, the kids don't need me. They've started middle school and high school, respectively, and take themselves back and forth. My internal clock, however, still hasn't made the adjustment. I no longer have to fix my life along their 8:10 a.m. -- 3:05 p.m. axis; no longer have to finish grocery shopping, cooking, laundry, housecleaning and writing within those unyielding coordinates; no longer have to spend the hour after school anchored in the frenzied playground collecting backpacks and chatting up the other parents about teachers and play dates. I no longer have to be anywhere, anytime. I have the independence parents jones for, the freedom I fleetingly imagined while crossing against speeding traffic on that 18-minute sprint. I've been liberated. It's boundless, new and strange, and I'm completely adrift. 2:48, and I'm still here.

It isn't inertia that's got me. I'm not potted in pajamas; in fact, I'm wearing an ironed shirt from a morning meeting. I've kept the collar on for Finn's benefit, to reassure him when he walks through the door that I have done something productive since I washed his breakfast dishes and said "Have a great day" at the elevator. Face it: The shirt is for my benefit, too. Maybe I'll put on a tie before the boys get home.

The meeting was for a potential book project, something that's come up like a tailwind at the right time and could lift me through the fall. The editor was an elegant Italian woman, in New York for a few days before flying back to Europe. Over oatmeal, I talked too long about my kids' new schools to someone who lives in the sky, still moored in the playground where I was sunk in like the benches and knew what I was doing. It's been a while since I was asked to think at breakfast. Antonia smiled chummily before looking at her watch.

I landed at the playground after three corporate layoffs, when my wife went back to work full-time. The daily structure and social integration I'd lost was replaced immediately by the logistics and community of the boys' school lives, and I learned how to be a different kind of provider. The kind who doesn't wear a tie. On our way to school, Finn and I used to walk past a Brooks Brothers window, and he'd stop by the mannequins in dark suits. "That's a business meeting suit. Is that the kind of suit you used to wear?"

"Sometimes," I'd offer and take in the new cuts.

"Like the suits in your closet? Were those your business meeting suits?" Finn's confusion about my shifted role reflected my own, like the conflict my wife felt when she returned to work. Occasionally, when Finn or I needed a boost, when I wanted to measure up for him and be the man I wasn't any more, I'd come to school in one of the old suits and the shirt I'm wearing now, pretending my way into change.

When they boys graduated from their old schools in June, they knew where they were going. They live entirely in the present. Graduation, summer camp, new schools -- their lives have the unconscious progression of breathing. I graduated, too, from the schedule, from the playground, from the continuity that sustained me when the life I'd envisioned disintegrated, but I don't know yet what I've graduated to. At the start of the school year my trained reflex kicked in at 2:47, and I ran back to the playground. Without kids, it's now a criminal violation for me to be there. Some of the old crew stood in a knot by the tilting London Plane. "What are you doing here?" Charlotte shrieked in surprise. "I thought you were free?" 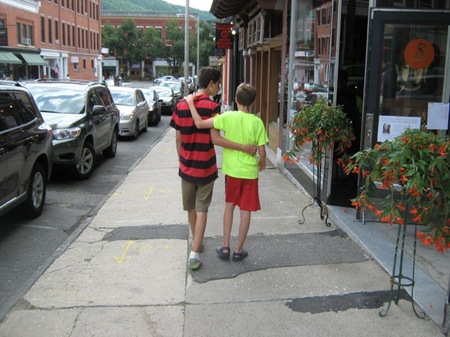 3:02, and the phone rings. "Hi, Dad, it's Finn." A riot of noise is competing with his practiced greeting. He's calling from the middle school's front steps, dying to use the new phone we got him and ask permission to do what he's already begun. "There's a new pizza place across the street, and we want to try it out. Then, Jacob's going to Matthew's, and he invited me."

Finn is excited by his new freedom. Every day this week, there's been a call at 3:02 just like this one: another new hangout, another destination, another chance to expand his world and consider what he finds there. His transition is complete.

"How much homework have you got?" I ask.

"Just math and humanities," he says, then a beat of evolving conspiracy. This is the new routine.

I start to unbutton the shirt and get up to hang it in the closet. I have a meeting at the end of the week and can get another wear out of it. But the clock grabs my attention, and I stop. 3:04; I'm late. 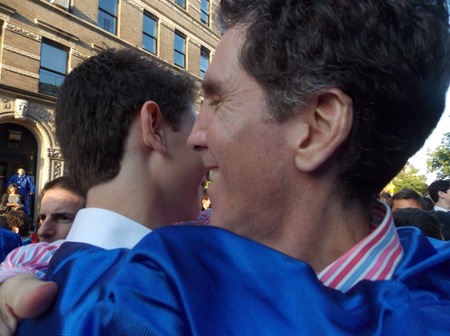