Walmart, the nation's largest importer of foreign goods by volume, is currently hosting an open call for American-made product pitches at its Arkansas headquarters. This "manufacturing summit" is part of the company's commitment - made very publicly, with lots of fanfare, in 2013 - to buy $250 billion worth of American-made products by 2023.

Make no mistake: Walmart relentless drive for the cheapest prices available drove many manufacturers offshore over the last few decades, and it was more than a sign of the times that American manufacturing jobs steeply declined as the supercenters proliferated.

But as I've said from day one, it's undeniably a good thing that America's biggest retailer sees the value in promoting products that were made here. Where Walmart goes, others follow. And that can have a profound effect on how and what our country purchases.

Still, the company could do much better. And it could start by being honest about the numbers behind its purchasing pledge.

Exhibit A: The company's fancy new infographic that touts the progress made toward its $250 billion pledge.

In it Walmart lays out its pledge in glowing terms and, no matter how you slice it, $250 billion is a lot of money. But remember, this is Walmart we're talking about, where the numbers are as big as the stores. And, based on growth models, $250 billion is less than what the company will spend if it dedicates just 5 percent of its annual procurement to American-made goods.

So the Alliance for American Manufacturing made some light edits to that infographic. 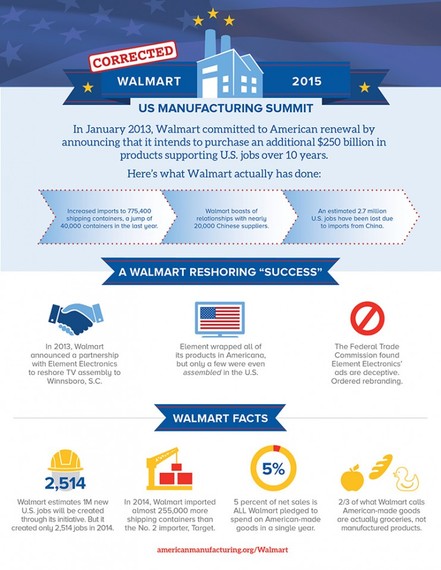 Here are some other little half-truths we found:

That's just the tip of the iceberg. You can see the rest of the correction here.

Again, Walmart's pledge is impressive, and $250 billion spent on anything is no small potatoes. But a company with as much sway and as large a checkbook as this one deserves a little scrutiny from time to time.

Yes, we can save money and live better. But we should expect more from Walmart, too.