The day belonged to her big sister, but thirteen-year-old Lottie Moss may have gotten enough exposure at her sister Kate Moss's wedding to launch a modeling career.

The Evening Standard is putting forth the possibility that despite her age, the youngest Moss has what it takes to become a model after standing out as one of fifteen bridesmaids at Kate's highly-publicized July 1 nuptials.

"Lottie looks beautiful and fresh -- a very English rose look. Her mother is quite right to wait until she is 14 and has developed more but she has wonderful features and could definitely make a model. Generally you need the height. Kate is an exception to the rule because models need to be 5ft 9in to 5ft 11in. I think Lottie would make a lovely young model."

Lottie (whose full name is Charlotte) has already done a bit of modeling for her parents, who own a vintage clothing shop called The Toll House, Lindfield. But her mother Inger (Kate's father's second wife) told the Standard, "She's too young [to model professionally]. When she is old enough it will be her decision."

Too young? Kate was just fourteen when she was discovered, walking through JFK airport with her father.

See a picture of Lottie below and tell us: does this thirteen-year-old strike you as the next Kate Moss? 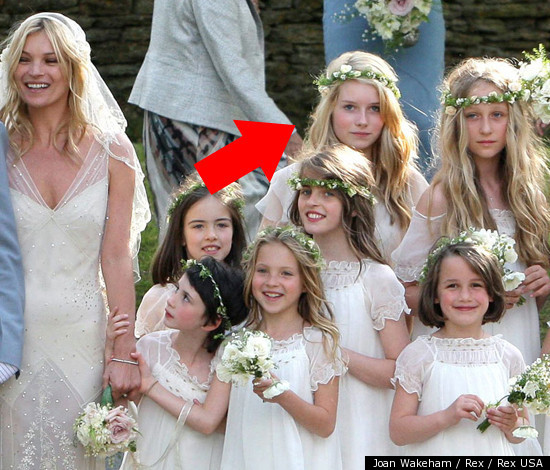