Who else but Lou Ferrigno could stir up a project like The Liberator -- a perfect storm of awesomeness. A multi-media franchise with potential to burn, The Liberator focuses on Mr. Ferrigno as Ed Migliocetti -- a.k.a. "The Liberator," a scientifically-enhanced superhero who, after many triumphant missions, has been scapegoated and discarded, and seeks to reclaim both his own honor and the trust and transparency of the free world. A high-profile whistle-blower not unlike Edward Snowden (albeit significantly larger), the character of the Liberator is first and foremost a complex man of strong feelings, yet in the public eye he's become a traitor, the disgraced former leader of a government-backed superhero team who served outwardly as goodwill ambassadors -- and covertly as black-ops agents -- until a mission went bad and he took the fall. 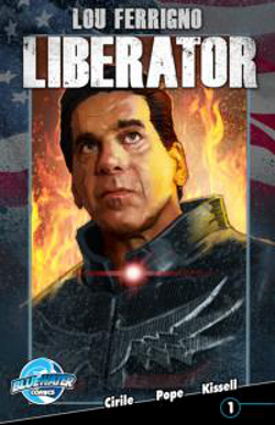 Now he's back with an axe to grind and a world to save. Sure, growly Christian Bale tried to play the kinda-sorta senior "Dark Knight" -- frankly, to mixed results. Whereas legendary Lou Ferrigno -- from The Incredible Hulk to family man to licensed lawman -- has exactly what it takes to bring a new and complex yet pleasingly familiar elder champion of justice to a public hungry for a hero. 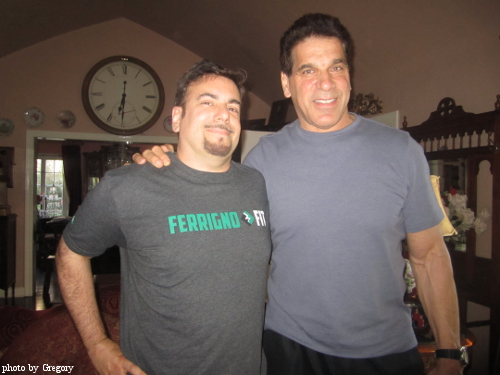 Premiering last year at Hollywood's esteemed HollyShorts film festival and continuing to Stan Lee's Comikaze convention and beyond, the crowdfunded, handsomely-produced presentation pilot Liberator, directed by Aaron Pope, is soulful, smart and action-packed. In addition to the fearless Ferrigno, it features the mighty Michael Dorn (Star Trek: The Next Generation), kickboxing legend Don "The Dragon" Wilson, and Peta Wilson (TV's La Femme Nikita) -- plus the politically-minded Ed Asner as a rather dubious President of the U.S. The short's success has led to it being picked up as a comic book. In August, BlueWater Comics will debut the first issues of the brand-new Lou Ferrigno: Liberator comic series. 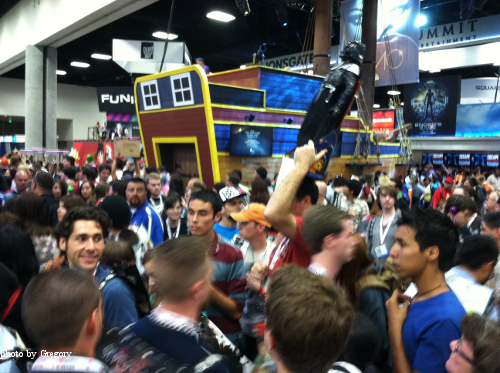 Mr. Ferrigno is at Comic-Con in San Diego this weekend, promoting the new production. Recently I sat down with him and screenwriter Jim Cirile to discuss their dynamic new project. A question about action work -- then and now -- was my opener, but Lou explained that Liberator delivers action yet much more. 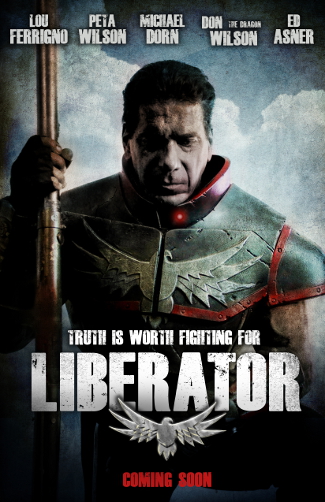 "Liberator's got heart and soul; it's not a typical action movie," says the two-time Mr. Universe winner. "It's not just about an aging superhero -- it's a guy dealing with rejection, dumped by the government, a former agent. He lost his relationship with his wife, with his daughter; he has nothing. And now he wants to blow the whistle. It's like Snowden -- he's fed up and he wants to show the world all the corruption. I put my heart into it. It's not just 'I did another film' -- this is something that's very connected to me, part of my life." 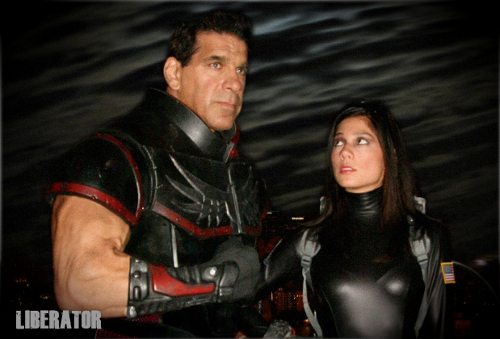 I remind Lou of 2009's wonderful comedy I Love You, Man -- in which he's featured as himself, with Jason Segel unwisely picking a fight with him -- and how much I love his hilarious scenes (dude's got range). He's pleased, and reports that, subsequently, fans request "sleeper-hold" photos at conventions. (Yes, I went for it. So did the publicist. Thanks, Lou! We love you, man.)

"But this story really speaks for itself," continues Mr. Ferrigno, evoking his green glory days. "It's very, very powerful, because it reaches all ages. It's like when you see The Incredible Hulk TV series, and every episode has a message. This one has a powerful message -- you're almost with this person, you're together with him, battling and fighting for justice."

Chimes in Mr. Cirile: "We always knew that Lou would be ideal for this role. But as we developed the material, we kept throwing in things where we were like, 'Well, I hope Lou is gonna go for this, because it's a little bit personal! It might hit a little bit too close to home. Which might require him to dig a little bit more as an actor. How much is Lou willing to open a vein on film?'

"We were very much inspired by The Wrestler," Jim continues, "which is a similar sort of story. Ours is obviously set in a superhero world -- well, a real world I like to think, that just happens to have some superheroes in it -- but, you know, where Mickey Rourke was able to take a role like that, and just lay himself naked, you know, and just rip it up. And we were like: 'Is Lou going to be able -- is he going to want to do this?'"

Lou wants to do this. (Thwart him at your peril.) As do Liberator's other stars.

"When we had the cast together for the reading, before the film, it was beautiful," states Mr. Ferrigno with a gentle pride. "Michael Dorn is a wonderful actor. I was impressed when he read the scenes with me. I mean, he's done many, many Star Treks. I've seen him at conventions, I've talked to him briefly -- but on the set, I mean, the guy's like Shakespeare! He wanted to be involved -- that made me feel good, because you can't carry the movie yourself. Everyone did a wonderful job." 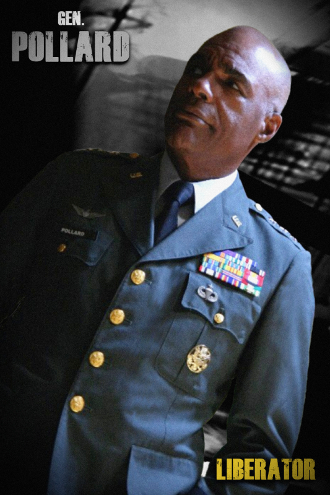 Mr. Cirile -- a writer of substance who humbly describes himself as "a bit of a political wonk" -- turns the topic to sociological relevance:

"What we're really trying to do with this is create this character, this incredibly deep character for Lou, but one that will get everybody thinking, and talking. And all that research, and all these political questions and ideas and stuff, we wanted to get it all in there, so that at the end of it, people go: 'Oh, that was a fun action movie!' on one level. But on another level, maybe they're thinking: 'Huh, this kind of echoes what's going on right now -- you know, with Snowden, and obviously there've been others, Valerie Plame, other prominent whistle-blowers, who've come out, who've had very important things to say. And do we listen to them, or do we not listen to them? How do we treat these people, you know, should they be heroes? Should they be jailed? Or is it somewhere in the middle? Whatever the dialogue is that it starts is a good thing." 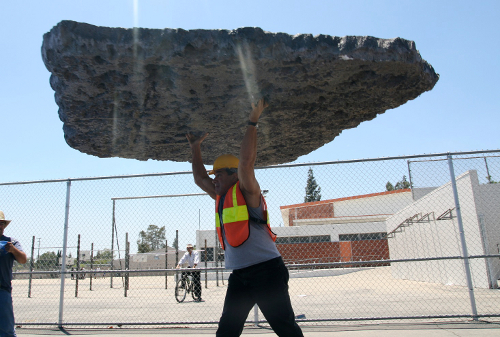 I ask Mr. Ferrigno about the desire for physical perfection in his formative years -- and perhaps a hero of his youth.

"Well, as a kid it was my only path to survive. I had nothing, and I was dealing with severe hearing problems. I had a severe speech impediment. And I had nothing else, so that's why I was fascinated with getting empowered. It gave me a good feeling about myself; it connected me to the superhero." 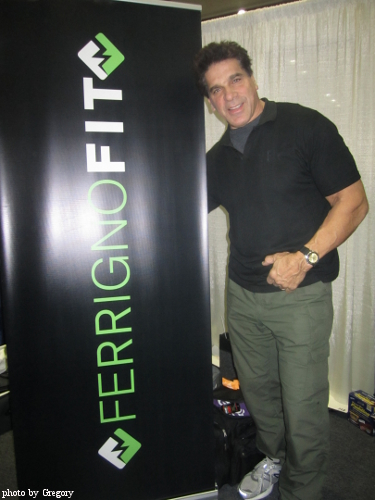 And Lou's hero? No pause whatsoever:

Lou further clarifies the parallel: "I've been a deputy sheriff for eight years: I work with gangs, I work with search and rescue. I see the other side of the wall. I see all the homicide, all the drugs, all the murder, everything -- sometimes I see so many individuals that are afraid to speak the truth. They're afraid to fight for justice. I'm not afraid to go beyond that line. And that's what the Liberator is like -- he goes over the line: like James Bond! Nothing's gonna stop James Bond."

I'd like to conclude by adding that it's also rather apparent that nothing's gonna stop the Liberator.