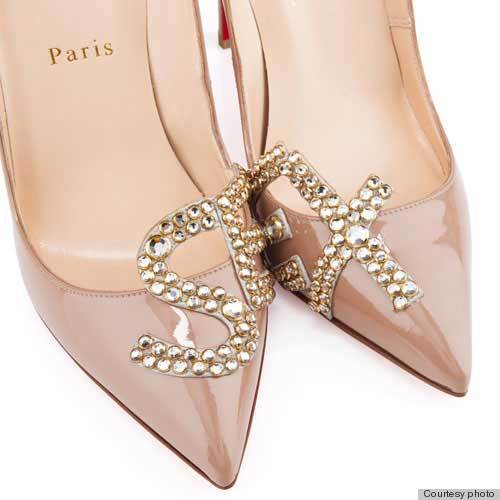 For $1400, you can score (heh) a pair of these saucy new Loubs that form the word 'SEX' in Swarovski crystals when the wearer stands with her feet together.

It sounds... cartoonish, right? But celebs have already given them a spring seal of approval: Ashanti donned the SEX shoes at New York Fashion Week; Katy Perry took them for a SEX-y stroll down the red carpet, and Kate Upton towered SEX-ily in a pair of the nude-colored pumps just Sunday night.

Ladies! We guess if you're headed out to a party and want to unleash your inner Samantha, these shoes are even less subtle than those fitted tees that say "NOT EVERYTHING IS FLAT IN KANSAS." Not that Christian Louboutin has ever claimed his shoes are G-rated; in fact, he's previously boasted that they're orgasmic.

But despite the bold message, we're not sure exactly what statement the 'SEX' shoes send. Is the wearer... looking to get lucky? Merely open to the possibility? Just shock-jockeying? (Should we send Howard Stern a pair? Don't answer that.)

As women, we have to admit: we're inclined to think these are hella tacky. But then, we're also probably not the target audience.

To see how the 'Sex' shoes really come across, we took an informal poll over email to ascertain what straight guys thought of them.

Here are some of their responses (emphasis ours):

"I've never really understood this bizarre bro fetishization of pumps, and this is somehow strangely like a culmination of that, I guess? Like, a billboard on a sex object advertising it as a sex object? That's weird! I would find them highly intimidating, I think."

"First reaction: There are two e's! What the hell is "seex?" The Software Engineering Excellence company of Tempe, Arizona, should sue for copyright infringement.
Second reaction: I mean, it's sort of hot in a desperate, attention-grabby way. I'd be interested to hear if wearing the shoes gets them sex. If so, i might start a line of man sandals that say 'Kate Upton' or 'Free pizza brought to my desk.'"

"Stupid and gimmicky. Also, who thought that making a shoe in a color resembling tapioca pudding was sexy?"

"It seems like it's trying to force people into having a foot fetish by being super obvious. SEX FEET. But it's weirdly insulting to men in that way, like 'Hey dummy, look down here.'"

"Well, they make me think about sex, so they are fairly appealing. Though, not as appealing as Ashanti's [boobs]."

Hmmm... while some of the guys were titillated with the Louboutins' message, our 'Sex' shoes Yalta reveals that we all might agree: stilettos are sexy enough on their own.