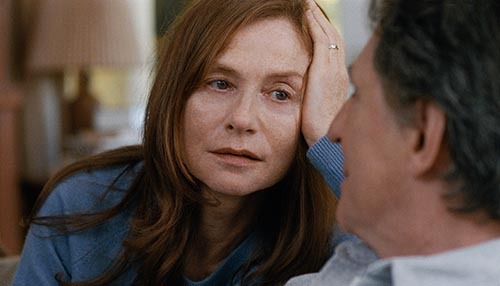 The debut English language film for Norwegian director Joachim Trier, "Louder Than Bombs," introduces American audiences to a truly gifted filmmaker who combines a mastery of the medium with wit, intelligence, energy and freshness.

There's a certain athleticism to his work, which is not surprising given his background as a champion skateboarder who caught the moviemaking bug while shooting his own skateboarding films. It didn't hurt that both of his parents were involved in the Norwegian film industry.

The film bug bit hard and Trier turned his attention away from wheels to reels attending the National Film and TV school in the UK.

His very polished student films earned him attention as a standout young director who created engaging short films with a sly dark humor. One features a student who preps to take his final exam by methodically sharpening his pencils at his desk while the other students grind through the test. Instead of finally buckling down and getting to work - he holds the pencils (one in each hand) with the erasers on the desk and the sharpened points straight up. Just as we begin to think he's going to dive into answering the questions before him - his head drops and the pencils impale his eyes. The blood rushes out and he's dead.

Trier's new film stays away from pencils and bursting eyeballs but it too deals with the interior monologue of its characters.

He's blessed with an outstanding cast, including Isabelle Huppert, Gabriel Byrne, Jesse Eisenberg, and Academy Award® nominees David Strathairn and Amy Ryan, and Emmy® nominee Rachel Brosnahan. Each one turns in a nuanced and rich performance in this film, focusing on the power of memories to shape a family. In Trier's hands these memories and the silence that often shrouds them are "Louder Than Bombs."

Trier, whose father worked as a sound technician and Jazz musician, uses music, ambient sounds and the juxtapositions of images to convey the inner thoughts of the characters. He pays attention to how each of his characters perceive the same incidents from different vantage points and through whatever expectations and preconceived notions they may have. It's a technique that could become bothersome in less capable hands.

He's able to weave these multiple experiences into his narrative without interrupting the experience of the audience by doling them out at different periods in each character's story. Each time we see how another character interpreted the same events, we're given a deeper clue to what actually occurred and how the characters interpret what they see based on limited knowledge of what is actually happening. Something we all do.

Isabelle Huppert plays Isabelle Reed, a famous war photographer, whose death opens the wounds of a family mourning and now out of equilibrium. Their different memories and her actions are seen in retrospect through her husband Gene Reed's part of this montage of shifting time that drives the plot forward.

As her husband, Gabriel Byrne brings a deep and rich presence to his role as a thoughtful and caring father trying to understand his wife's death and hold his fraying family together.

His two sons are both struggling to find firm ground to stand on and a direction so they can move forward. Jonah Reed, (Jesse Eisenberg), is the older brother who left his wife and newborn child to return home to help his father prepare for an exhibit of Isabelle's combat photographs. He's not sure if he wants to go back and assume the mantle of fatherhood or take up with an old flame.

Devin Druid, as the younger son, Conrad Reed, is in an awkward phase where videogames consume, console and offer a means to channel the overwhelming complexities of growing up.

Amy Ryan as Conrad Reed's teacher, Hannah Brennan, who's also involved with his father, adds another obstacle to Gene's efforts to bond with his sons and deal with his wife's death.

Making matters ever more difficult David Strathairn, as Richard Weissman, also a war correspondent, has a secret that can only test the bonds of friendship.

The rest of the cast, Rachel Brosnahan, Ruby Jerins and Megan Ketch add to this already stellar lineup.

Some might fault Trier for tackling subjects about people who appear to have it all. In "Louder Than Bombs," the angst of the upper middle class becomes universal as Trier takes us into their struggle to find what it takes to hold a family together.