In a new series entitled “My Home,” photographer Louis Chan turns his lens on the private rooms of households much like the one he grew up in: working class, Chinese American families, mostly living in Lower Manhattan.

The images document an experience that may soon be lost, as Manhattan’s Chinatown is increasingly gentrifying. Chan spoke with HuffPost about the childhood memories that inspired the series, the stories that everyday objects tell, and discovering a shared experience in the rooms of others. 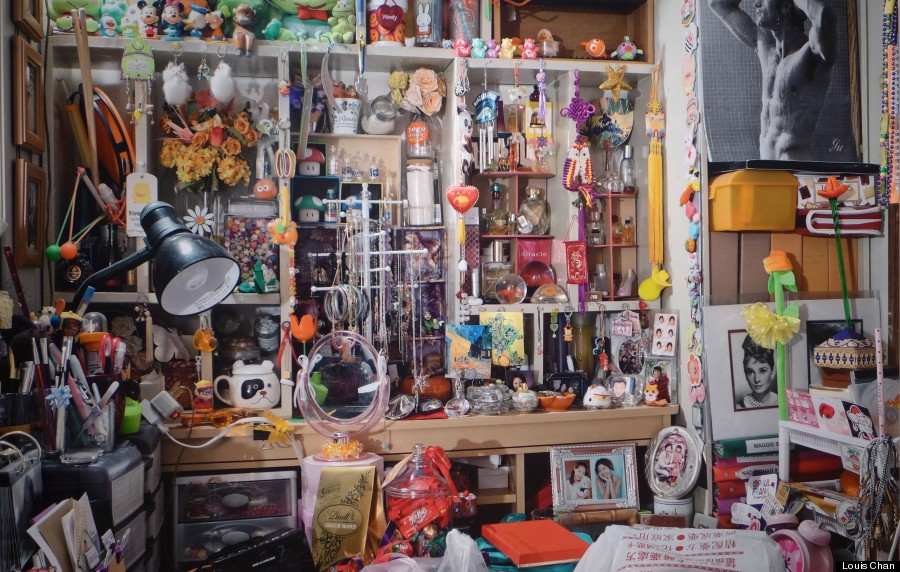 What was the inspiration for this project?

I grew up in New York City -- I was born on the Lower East Side and lived there until I was about 25. I also went to school near Chinatown, near the area where the Smith projects are located. I would go from Alphabet City to Smith, and I would see how the landscape has changed since I was born, since I was going to school and everything. I saw the Tompkins Square Riots, and I saw the Lower East Side change from a working class, low-income neighborhood to something that’s very different today. And I started seeing Chinatown changing -- a lot of the people who used to live there, the original immigrants, start to move out and a lot of gentrification starts coming in. So I decided to do photos to try and preserve some sort of memories of the area, and I started the project with a lot of my friends and family. I do have a lot of family that live here, and a lot of them live in the Lower East Side and in Chinatown. I wanted to preserve the memories and interiors of the neighborhood. 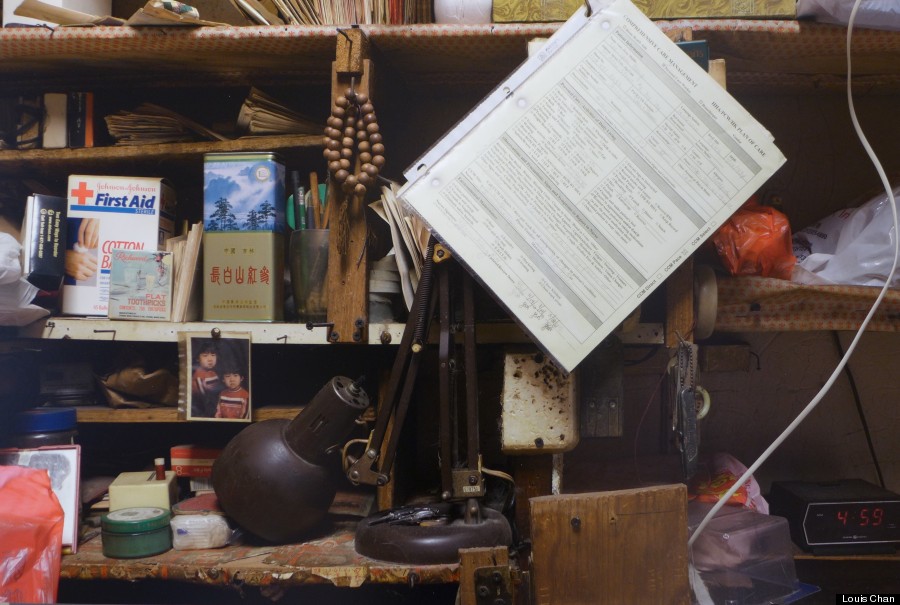 Why did you decide to focus on private rooms?

Well there’s something very intimate about interior space, people’s living spaces. Their possessions say a lot about who they are -- also as a group of people, not just individuals. All of these interiors are of Chinese American or immigrant Chinese homes, and they really say a lot about how they live and who they are. 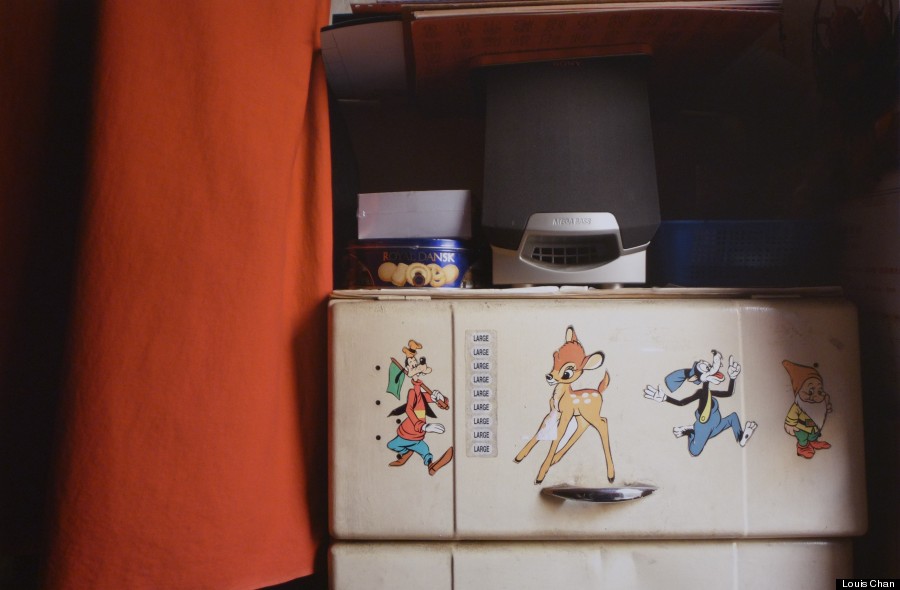 How did you choose the rooms that appear in the series?

I started asking around with friends and family, and when someone would grant me permission, I would come by semi-unannounced. I’d let them know, OK great, I can come, I’ll give you a call within the week. Then I’d go in and survey the area, survey the rooms, look at the space and kind of decide what I felt was interesting. A lot of times there were just random objects that would really catch my eye from growing up, that I felt were interesting to me and possibly to the viewer. 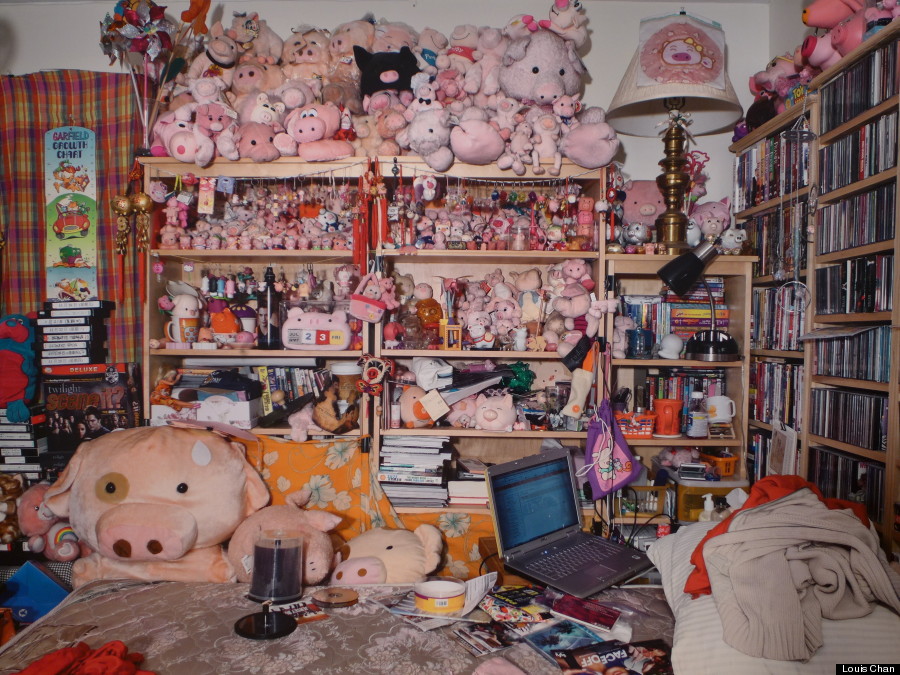 What about these rooms spoke to you?

Sometimes being that they’re friends and family, I’ve visited some of these spaces more than once before even doing the project. But I noticed there was a common thread in a lot of these spaces: certain products, certain things that I would see in my own home. And I noticed there’s a pattern in a lot of Chinese American or Chinese immigrant homes. For example, my parents and my grandmother collected a lot of things. They kept a lot of things to be repurposed, like tupperware and calendars, old cereal boxes that they would neatly flatten and save for another day that they might be able to use again. That really speaks to me. That speaks, first, about the lack of space living in New York City, and the lack of money, trying to always save everything you have. My folks always saved every bag and reused it to carry things, before there was even the idea of recycling. 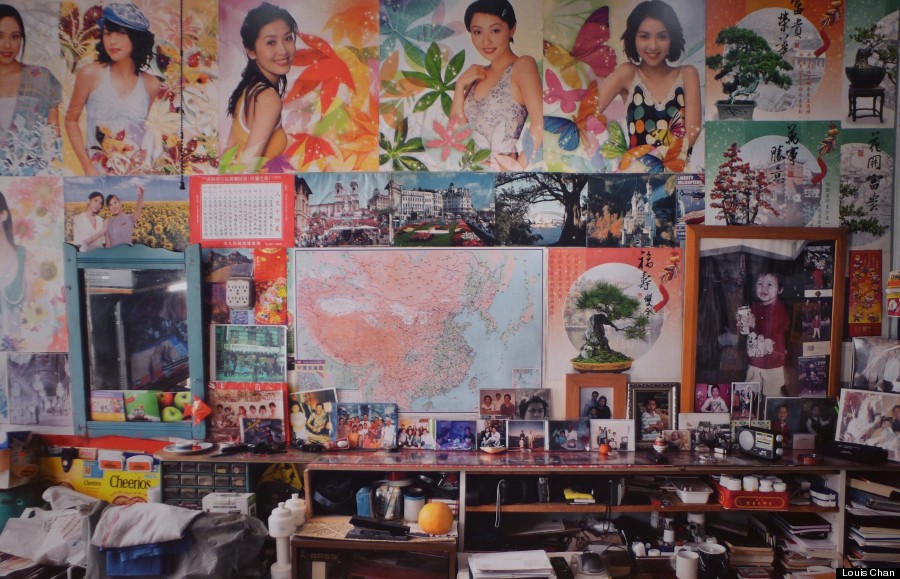 There are certain products -- for example, Ovaltine is really popular with my family and all the families I’ve been to. I started thinking that something as simple as Ovaltine is actually a charged product, in the sense that I understand it’s popular in Hong Kong, and I wondered why it’s so popular in Hong Kong. I have to suspect it must have been popular due to the occupation of Hong Kong after the Opium War, as a British colony. And the idea of tea time. My mom was a seamstress at a factory and my dad was a cook in a Chinese restaurant. My mom always had afternoon teatime, where the factory would take a break and have a pastry and coffee or tea. It’s funny because these are the little things that carry over, that we may or may not realize. 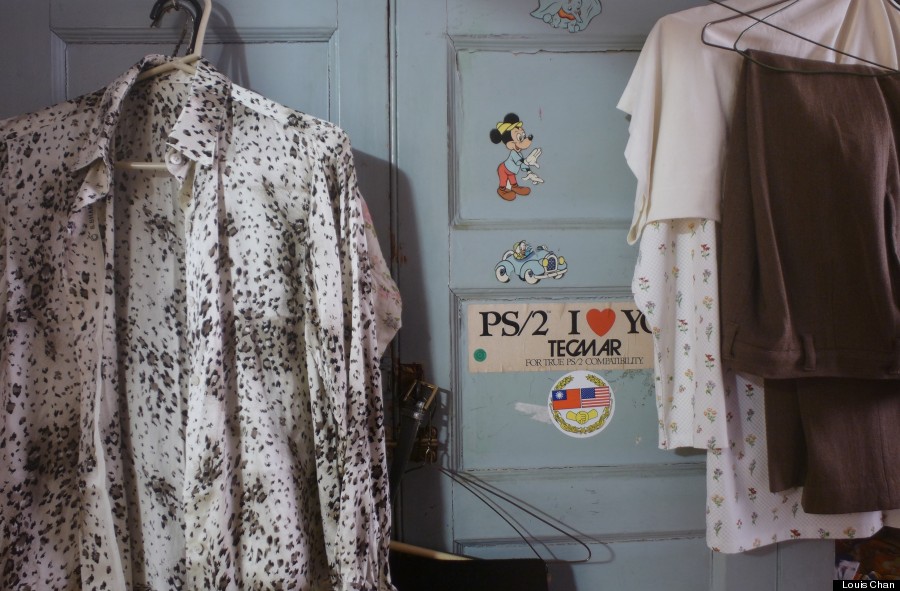 Another thing is free calendars. They’re given by local businesses like convenience stores or, back then, video stores. There was no direct TV programming from Hong Kong, and you needed to see the shows on VHS. So they always gave these calendars of movie stars and beauty pageant people from the Hong Kong entertainment world, and my grandmother and my family, we always saved some of those. In more than one of the photos, other families did the same thing, too. 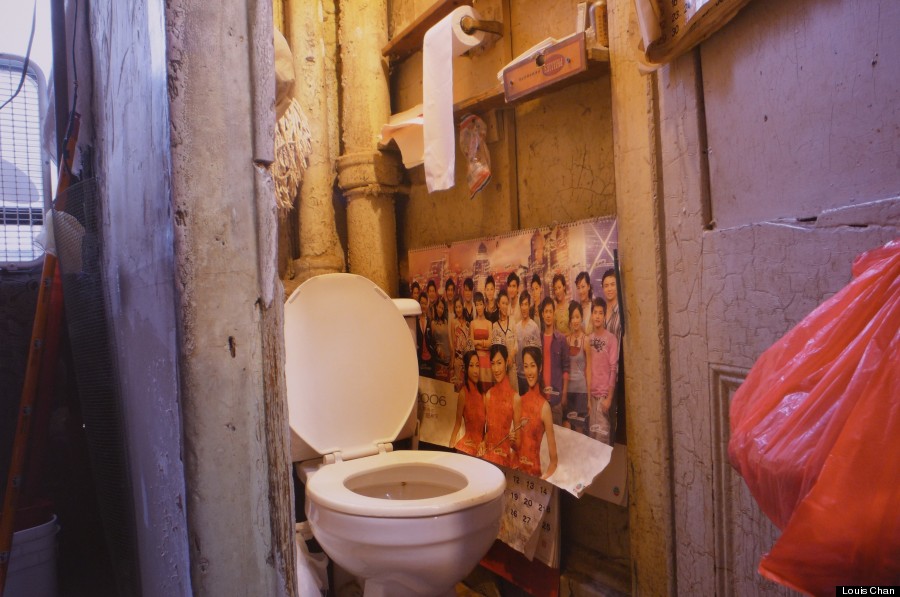 What do these rooms say about the people who live in them?

They're almost like time capsules. I feel like immigrants from Hong Kong or South China who come to New York, they’re kind of stuck in a bubble in Chinatown. But life is happening all around us. Hong Kong and mainland China are changing rapidly. Meanwhile, all these homes kind of stay the same. The rooms really speak to me growing up, because when I was a kid my folks were poor and they worked really hard -- they were trying to support me and my sister, and I kind of see that in all of these homes where they would save everything, repurpose everything. 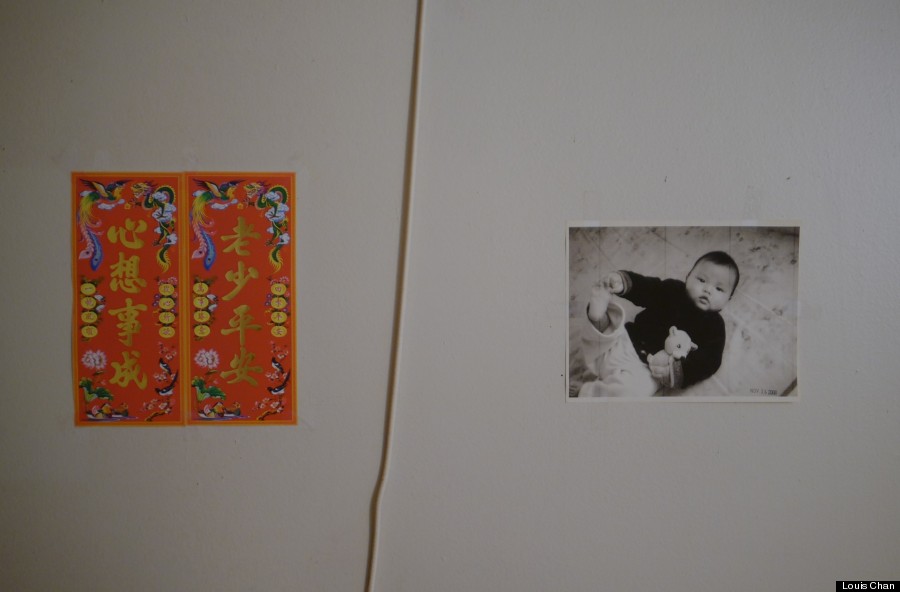 What do these photographs say to you about Chinese American identity?

I am Chinese American and my parents are immigrants, so I’ve lived and experienced that culture. So for me to make a series about it, I had to think about what I can say to make it interesting, and what I can say that hasn’t been said already. I guess it was kind of confusing because I wasn’t really sure what to do. At the same time, I don’t know a lot about Chinese history, I’m just this Chinese American kid who doesn’t know much about anything yet. So I’m basing it on whatever I lived and what I experienced in my life.

I’m living it still and just trying to grasp the whole idea. Working on this gave me a bigger awareness of how far we as Chinese Americans have gone since my grandparents arrived. This is the tiniest slice of preservation within that history. 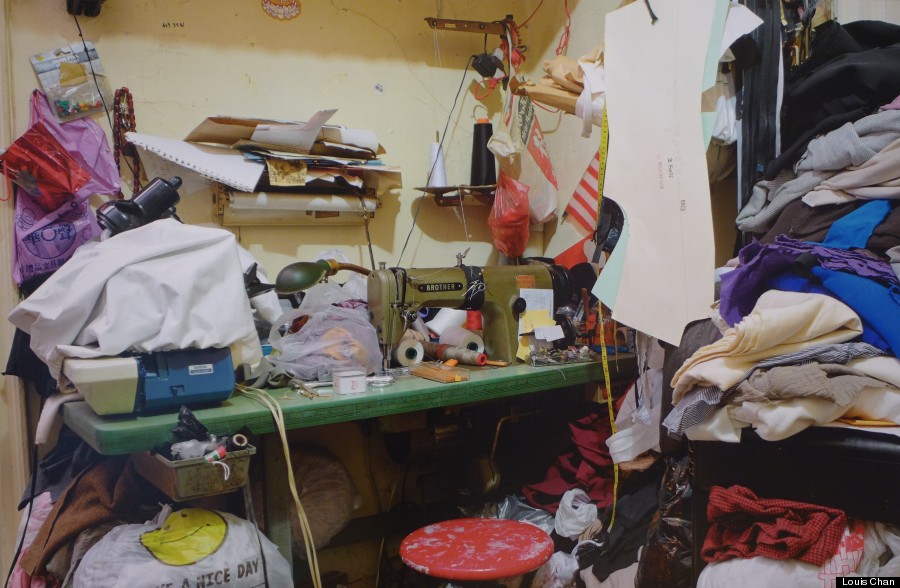 What did you want to show about the concept of home?

I think the title came about because I was always really close with my friends and family, and I would visit them often. And even though they lived in different homes in different locations, they always felt pretty much the same to me. Going back to the way they lived and the things they did, it was always a common ground. For example, a lot of my friends, their parents have similar occupations -- dad was a chef or cook, mom was a seamstress. A lot of times, I would go over to their homes and we basically have identical things: the brand of soy sauce, a plug-in thermos -- things that every Chinese family has. A lot of times there’s a sewing machine in the house somewhere, someone has a fish tank. For me it felt like I was at home no matter whose place I’m at. You can blindfold me and drop me in someone’s home and I could tell it’s probably a Chinese American home.

Chan's "My Home" will be on view at the University of Tennessee Downtown Gallery from Nov. 7-26.

CORRECTION: A previous version of this article misstated the closing date of "My Home." It has since been updated.