When talking to comedians who perform at New York City's most famous comedy club, there is a sense there's no other club in the world they'd rather be playing.

"Other clubs might give you advice like, 'Hey, you should do this. Why don't you wear a hat? You should do this,'" legendary comedian Dave Attell told The Huffington Post. “Here they never do that. They want you to do well.”

The club in question is the Comedy Cellar. Nestled on tiny MacDougal Street in Greewich Village, the club -- now known worldwide from its inclusion in Louis C.K.'s hit TV show "Louie" -- has charted a winding path through show business and has helped shape the careers of hundreds of prominent comedians.

The Cellar was founded in 1982 by then-standup comedian Bill Grundfest, at the start of a decade that saw standup comedy on a major upswing. The Cellar quickly became a staple of New York City’s budding comedy scene: Its early roster of comedians included Andy Kaufman and Robin Williams. The late '80s saw the Cellar as instrumental in the careers of later greats such as C.K., Attell, Jon Stewart, Sarah Silverman, Marc Maron, Colin Quinn, and Big Jay Oakerson, among others.

The club -- and its corresponding restaurant, the Olive Tree Cafe -- hit a rough patch in the late '80s and early '90s. Cultural trends and an over-saturation of standup comedy resulted in the closure of comedy clubs across the country. Many of the Cellar's New York competitors, including the original Catch A Rising Star, were forced to shutter their doors.

“There was a kind of deflation of the whole comedy club in the early '90s … and at the time the conventional wisdom was that there was overexposure,” says the club's owner, Noam Dworman. “I do think there are golden ages of creativity in all the art forms, and then there's ages of lack of inspiration.

“I think that when you go into those periods of lack of inspiration, that's really when things diminish. There was a big burst of standup comedy for a while and then maybe the acts were a little less inspired.”

Through a combination of luck and clever management practices, however, the Cellar successfully weathered the storm. A prevailing view among the comics is that the club owes much of its success to its approach to comedy and environment of inclusion.

“Think comedy relative to an indie film or an opera, [which are] preaching to the choir,” says comedian Dov Davidoff, noting the diversity of the Cellar’s crowd. “If I write a film about liberal justice from the perspective of a New York intellectual, I’m communicating with people who already subscribe to the New Yorker; I do a set down here, I'm talking to some animal from wherever-the-fuck, and another guy from Jersey … and somebody else that works in publishing. There's a cross-demographic appeal [here].”

Attell agrees, lauding the management for its support. “It's all about the comics. And that comes down from the owners, the managers and the staff. They really do support comedy. Some clubs are like a restaurant, and then a comedy club. This place is a comedy club.”

Those positive feelings are not just reserved for the relationships between the management and the comics. They are equally present among the comics themselves.

“For a lot of comics, it’s sort of like a second home,” says Rachel Feinstein, a former contestant on "Last Comic Standing" and a frequent Cellar performer. “There is a community there. Everybody looks out for each other … We might slam each other, but they’d be the first people that would pick me up if I needed anything."

One of the sources of that feeling among the Cellar’s comics is the comedians' table, a spot near the Olive Tree bar specifically reserved for the comedians. The club's comics are quick to praise the owner and management for including the table, which comes at a significant cost. (One comic mused that the revenue lost from the year-round comedians' table runs well into the five figures, if not higher.) To the comics, the camaraderie built among comedians at the table more than compensates for the monetary hit, and the table is now enough of a Cellar staple that it has been featured prominently in several scenes in "Louie."

No reference to today's Cellar would be complete without an acknowledgment of "Louie." Perhaps more than any other variable in the club’s success, it is C.K. and his show that have served to truly broaden the Cellar’s exposure. The show features the Cellar prominently in its opening credits, has shot scenes around the Olive Tree, and is often the location at which C.K. performs the standup routines featured on the show. The show’s effects have not been lost on the Cellar’s comics.

“After 'Louie,' the place just exploded,” says comic William Stephenson, a regular Cellar performer and frequent guest on the show. “People come by just to take a picture of the [front] sign.”

While it would be easy to ascribe the club’s recent success to C.K.’s show, it is difficult to determine the precise effect that the show has had on business. On the one hand, business was already good enough before the show’s premiere that the club had to continually turn away guests due to overcrowding. Yet as Dworman, the club’s owner, notes, the effect of the show has been undeniable.

“I’m torn because, on the one hand, it has to have had a positive effect on our bottom line. How much of an effect on the bottom line it’s had, it’s hard to judge. One of the reasons it makes it hard down there is, it’s a very small club. It only seats 110, 115 people. So we’re always in a situation of being sold out. So when you start turning away more people, it’s hard to translate that into bottom line.”

That being said, "I don’t want it to sound like I’m discounting how fantastic 'Louie' has been. And I’ve said to him that, of all the various exposure we’ve had down here over the years -- movies or whatever it is -- the only significant effect I’ve ever seen has been the 'Louie' show. It’s clear -- people stop and they take a picture in front of the place all the time. Every day.”

Unquantifiable as the C.K. effect may be, the show has helped solidify the Comedy Cellar as one of the most prominent comedy venues on the planet. And for comics like Attell, that will never change.

“This is its moment. This is the time to shine. So it’s cool that they have all these people coming in and people are turned away and there’s a waiting list. But at the end of the day, regardless of what happens, there will always be comedy here.” 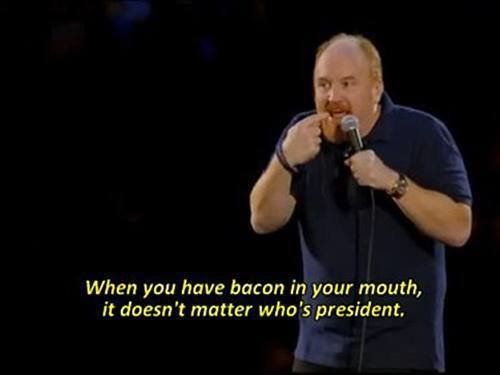