Earlier this week we were invited to a fête for a cognac tasting at Daniel Boulud's legendary four star restaurant, Daniel. The event was hosted by Louis Royer, a cognac distillery founded in 1853, and located on the banks of the Charente River in Jarnac, France. Louis Royer is an award winning distillery with master blender Laurent Robin and Master Selector Jérôme Royer at the helm making quite an impeccable collection of cognacs.

We were greeted at the bar with four ambrosia-like cocktails all prepared by master mixologists, which was quite the jump start for what turned out to be a fantastic evening. 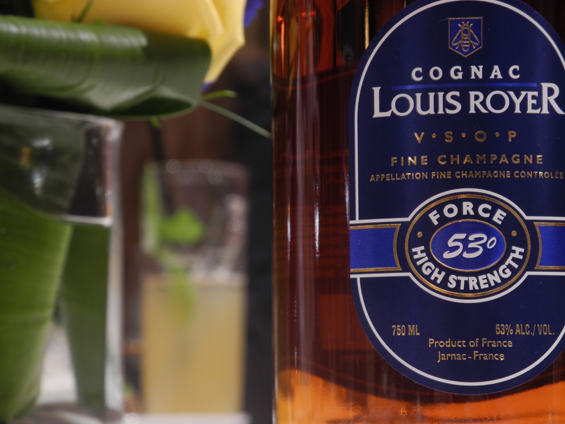 We started off with the Commes Les Français made by Jonathan Pogash of The Campbell Apartment: Louis Royer Force 53, Combier Orange Liqueur, Lillet Blanc, Passionfruit Juice, a rinse of Pastis, and topped with champagne.

Then we were off to the Marina Cay, by Richard Boccato (of Dutch Kills and Weather Up), Louis Royer Force 53, Fresh Lime Juice, Maple Syrup, and Campari. Cocktails were complimented by Duck Terrine with Sicilian Pistachio, Rose Petals Poached Rhubarb, Black Cardamom Gelee, with Young Musclin bites being passed like little jewels on silver trays. We, lovers of the libation and terrine, were already in heaven at this point.

We were then escorted into the private dining room of Daniel, where we sat down to a tasting to the Louis Royer Cognacs. We started with the Louis Royer VSOP Préférence, a cognac that reminded us of an aged bourbon - cherry, stone fruits, vanilla, with floral notes. 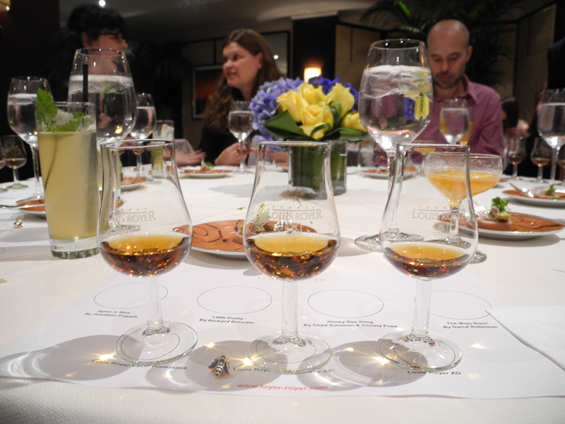 We then tasted Force 53 - which comes in at an astonishing 106 proof (53% alcohol). It was surprisingly smooth with flavours of vanilla, nutmeg, honey, and full of fruit.

Our final tasting was of the Louis Royer XO, which was the superior pour, with layers of tobacco, anise, honey, cherries, blackberries and vanilla.

Both the Force 53 and the XO won the Gold Medal at the 2011 BTI International Review of Spirits Competition, so dear reader, it is clear that we were being taken care of very well. 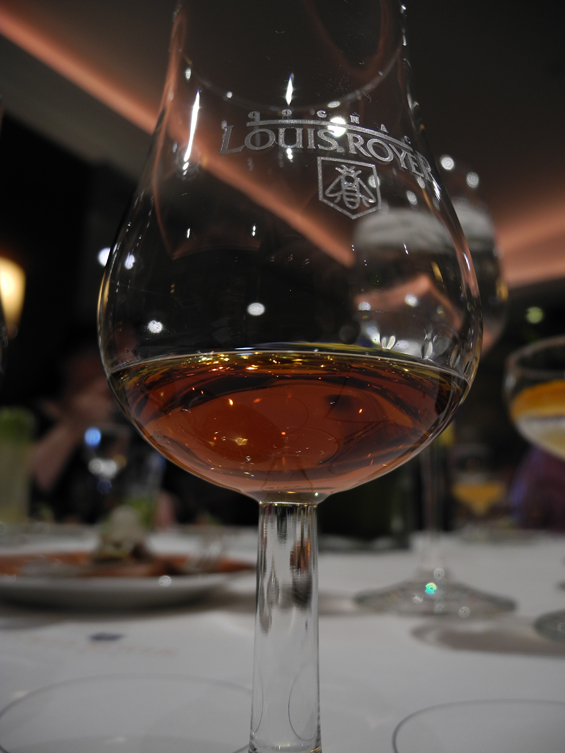 Perhaps you know as much about cognac as we did at the beginning of this fête, which was nothing. So we'll break it down for you. Cognac is named after the town of Cognac, France, and is a type of Brandy. Cognac is classified by its distillation and aging process and is strictly monitored by the Appellation d'Origine Contrôlée. Cognac must be made from specific grapes (Ugni Blanc), must be distilled twice in copper pot stills (also known as an alembic), and must be aged for at least two years in Oak barrels with wood from Limousin or Troncais. The double distillation process yields the appropriately named eaux-de-vie (waters of life), which is a clear liquor and is roughly 70% alcohol. During the aging process the cognac picks up its legendary caramel coloring and honey flavouring from the wood of the barrel. Water and alcohol evaporate at different rates and after two years the cognac reaches roughly 40% alcohol by volume. Each barrel is then blended or married with other barrels by the master taster (maître de chai) to produce a consistent cognac for bottling and distributing.

As avid bourbon drinkers, we understand this perfectly, the rules, the regulations, the standards of quality. (Bourbon must be aged in a new charred oak barrels, have a 51% corn ratio to its grain mixture, and aged for two summers.) We also understand that a good spirit must be aged for many years, and so we know the kinds of chemical magic that can happen in a barrel over say, two decades.

Unlike whiskey, cognac is given quality grades to indicate how long the spirit has aged in the barrel. The 3 most common grades; VS is the youngest usually 2 years in cask, VSOP (Very Special Old Pale) is traditionally aged 4 years, and XO is Extra Old, which varies from 6 years to 20 years. 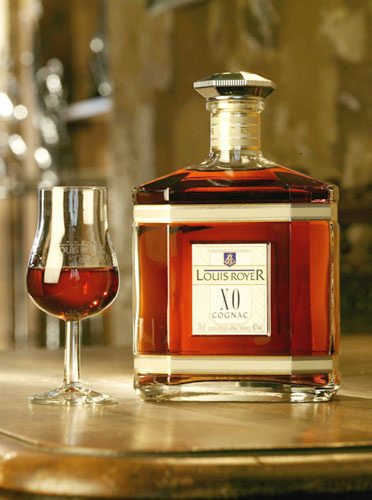 Nectar of the Gods

Similar to this post, the evening continued. It was announced that each course would be complimented by a cognac cocktail, which produced cries of delight from the guests.

Our favorite course of the evening was complimented with the Spice is Nice (created by Jonathan Pogash) - Louis Royer Force 53, Trader Tiki's Cinnamon Syrup, Ginger Syrup, and Fresh Lime Juice garnished with a slice of lime and dusted with Cayenne Pepper, which was served with the Mousseron and Maine Lobster Ravioli, Sauteed Lambsquarters, and Pink Peppercorn. 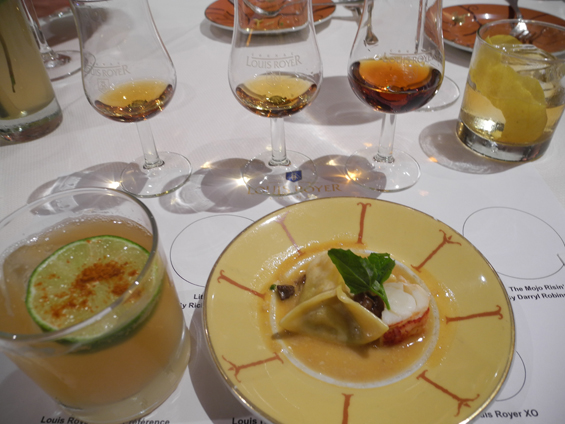 See below for the entire menu - in it's mind blowing glory: 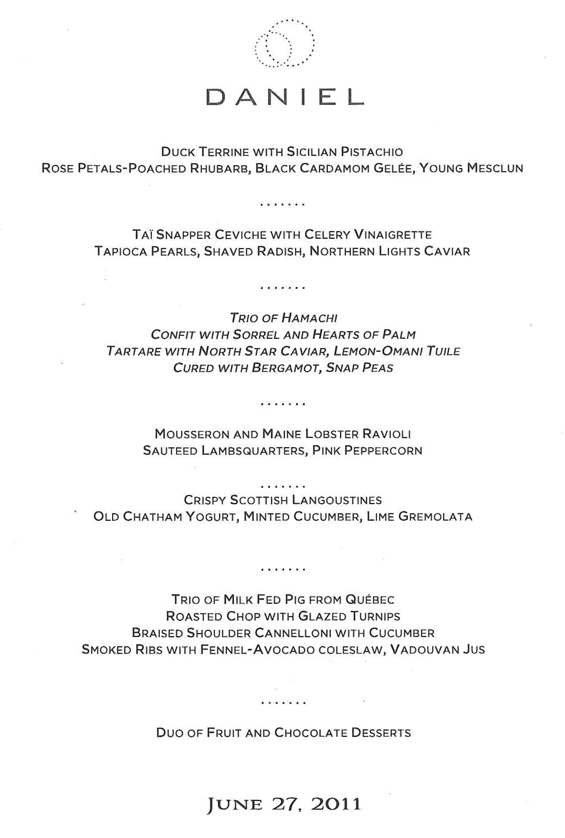 We were then invited to take a peek at the impeccable kitchen, which we have heard many stories about. It is clear that Chef Boulud considered every detail when building this restaurant, from the art in the dining rooms, to the sea foam tiles in the kitchen, to the glassware and cutlery - no detail overlooked. The kitchen was very focused, humming as plates were executed and sent out to the guests; and everything that came out of that kitchen had to be exquisite. 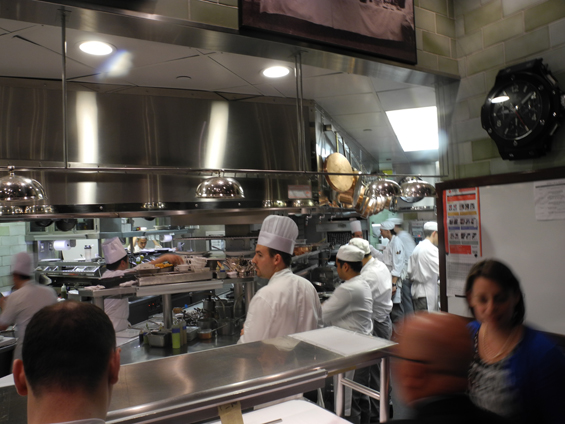 Although the kitchen was seemingly very calm, it was very apparent how passionate everyone was for the food - its quality, preparation, and presentation. There are only a handful of chefs in the world on Daniel Boulud's caliber in the world - and we were honored to have the opportunity to meet him after the event. 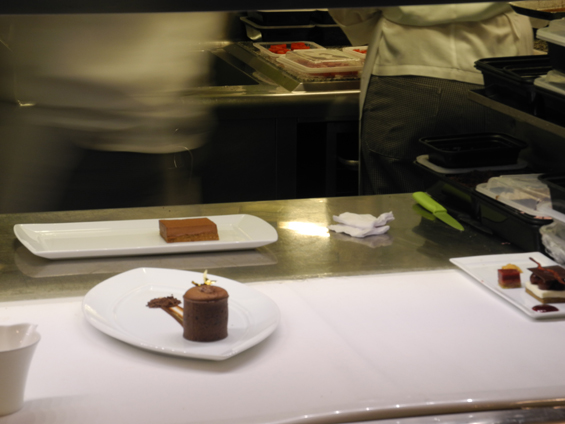 So with this, we leave you with recipes of our favorite libations. We continue to be in awe of what can be made from the spoils of the earth - and what an exquisite spirit can be made from grapes and wood. Quite remarkable, if you think about it. We doubt that this particular ambrosia will make you immortal (although you may feel immortal after a pour of that XO), but after such a fabulous evening, we're coming to believe all we need is right here on earth. 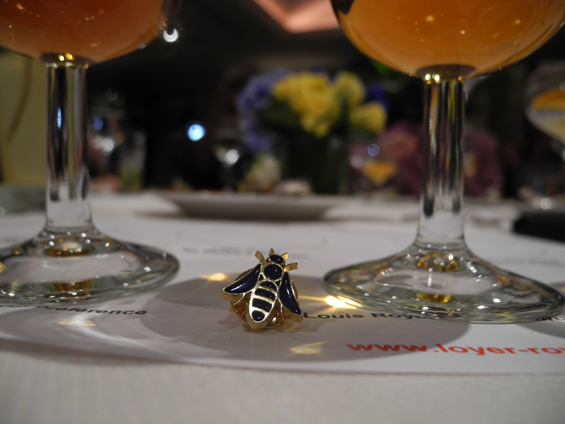 Spice is Nice by Jonathan Pogash