Okay my friends, here's my two cents on the non-stop coverage of Donald Trump and his "take no prisoners" way to you-know-where... Donald is, indeed, a unique, one-of-a-kind person. He is bigger than life and definitely louder than anyone else. And boy, the way he sucks the oxygen out of a room... 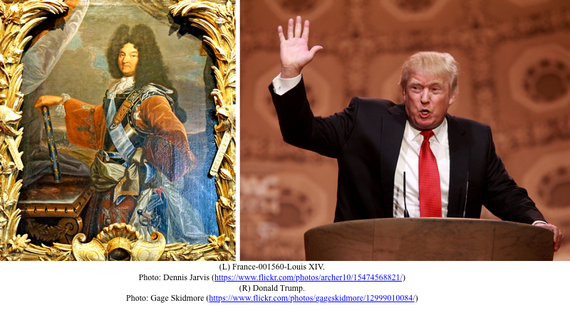 A headline in The NY Times last Sunday reads: "How Will Trump Redecorate the White House?" And it includes a photograph of the living room in his New York penthouse, obviously inspired by the royal splendor of Louis XIV's Versailles. But here's the problem: While Louis had excellent art advisors, Donald, in his attempt to recreate the royal splendor, ended up with an embarrassingly garish space evoking the décor of Las Vegas casinos. Just imagine Donald as an apprentice in a TV show run by His Majesty. You ready? Here it goes...Louis XIV to Trump: "Donald, you're fired!" Hmmm...wouldn't that be a dream come true? 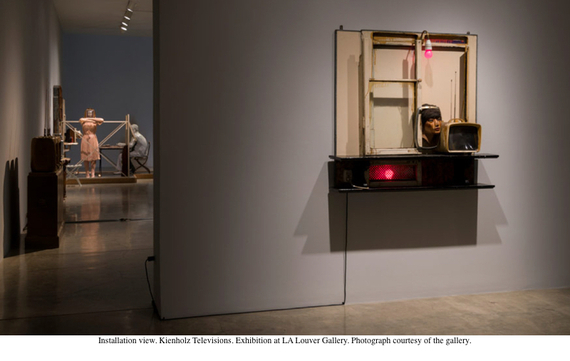 The current exhibition at LA Louver Gallery features amazing assemblage sculptures by Ed and Nancy Kienholz, with their focus on --if not obsession with--television. All of these works, with one exception, were produced between the late 1960s and Ed's passing in 1994. Here is a quote from a letter penned by Ed in 1984: "You may have guessed that I have long had a love/hate relationship with American TV. I sit dummy style in front of that marvelous communication tool and find my years slipping by and my mind turning to slush from the 95% trash being beamed my way."

It takes artistic genius to utilize trash from everyday life and transform it into a powerful and emotional artistic statement that resonates so strongly even decades later. I wonder, if Ed and Nancy were watching the bizarre election coverage today, what kind of assemblages would they produce? Would they use a full-size sculpture of Donald... or zero in on the golden crown of his hair? 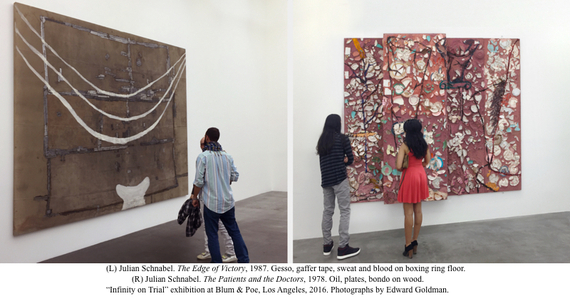 And while we are talking about bigger than life personalities, and artworks matching in size, let's visit Blum & Poe Gallery to see the mini retrospective of Julian Schnabel paintings, covering forty years of his career. In a small side gallery is his earliest broken plates painting from 1978, which launched his career. And I have to admit it still holds my attention --though I'm not sure I like it quite as much as when I saw his broken plates paintings for the first time decades ago. 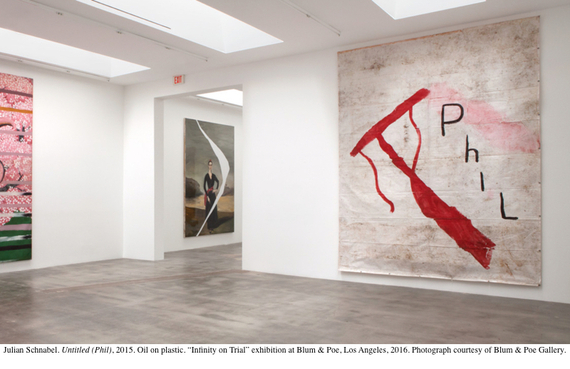 Small and medium sized works are not Schnabel's game. He goes for large, very large. Sometimes his ambition gets the best of him, but other times he's right on the money. I was particularly intrigued and impressed by his large unstretched canvas, which I found to be particularly focused and well edited. The painting, with its purposefully grimy whitish background, is dominated by a bloody red diagonal form, accompanied by four letters that read "Phil." It's Schnabel's homage to his late friend, the great movie actor Philip Seymour Hoffman.

I've been a big admirer of Julian Schnabel as a film director. Though I haven't had the chance to see his latest film, Miral, his high-profile movies from the late 90's and early 2000's such as Basquiat (1996), Before Night Falls (2000), and The Diving Bell and the Butterfly (2007) demonstrated his ability to match his over-sized ambition with top-notch artistic projects. At the opening of his show, I spoke to Julian and asked him how much the art of his painting affects his filmmaking, and how much the art of his filmmaking affects his painting. He said that it is impossible to differentiate; it is a singular, unbroken art process.