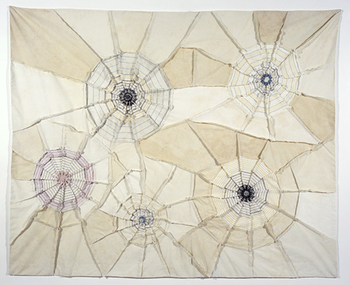 Known for her enormous sculptures of spiders, many reproduced in Louise Bourgeois: The Spider and the Tapestries (Hatje Cantz), Bourgeois was never clear about what they meant to her. When asked directly, she replied, "Why the spider? Because my best friend was my mother and she was deliberate, clever, patient, soothing, reasonable, dainty, subtle, indispensable, neat, and as useful as a spider." Elsewhere she wrote, "To my taste, the spider is a little bit too fastidious. There is a very French, fiddly, overly rational, tricoteuse side to her, with her ever more precise and delicate invisible mending; she never tires of splitting hairs."

Caught in a web of fear.
The spider's web.
The deprived woman.

she once wrote in a poem which may hint at her relationship with her mother. From age eleven, Bourgeois was raised by a governess who was in truth her father's mistress, an unfortunate fact which led Bourgeois to hate her father and resent her mother for accepting the arrangement.

At other times she identified with the spider herself. "The female spider has a bad reputation," she wrote, "a stinger, a killer, I rehabilitate her. If I have to rehabilitate her it is because I feel criticized." This evokes the role of the spider in world mythologies, aligned with feminine danger.

"All my work in the past 50 years," she said, "all my subjects, have found their inspiration in my childhood. My childhood has never lost its magic, it never lost its mystery, and it never lost its drama." Her spiders possess a sense of enchantment, like fairy tale monsters magnified by a child's fears, little creatures now towering over us.

Bourgeois is no stranger to the magical qualities of sculpture. Her husband, Robert Goldwater, studied the relationship between Primitivism and Modernism. Bourgeois was influenced by African and Oceanic totems-not mere sculptures, but objects with occult powers. Her oversized spiders seem to have similar fearsome qualities.

Ultimately, her work is personal. She kept a journal all her life, and referred to her art as "another kind of diary." She believed the process of repetition exorcised the unconscious. Although she tried to keep a respectful distance from the totems which inspired her, careful not to appropriate another culture, she returned to a form of mystical repetition from her own tradition. "My work," she says, "is a confessional."