On March 28th, the Redford Theatre in Detroit is set to screen Pandora's Box, the sensational 1929 silent film starring screen legend Louise Brooks. For Metro Detroiters, it's a special opportunity to see one of the great films of the silent era on the big screen of a restored 1928 theater.

Saturday's chance to see Pandora's Box is all the more special because Brooks and Detroit have something of a history.

Before she entered films, Brooks was a dancer. For two years, Brooks toured with Denishawn, the leading American dance company of the teens and twenties. Led by greats Ruth St. Denis and Ted Shawn, the company's members were a who's who of those who helped shape modern dance. During her two seasons with Denishawn, the teenage Brooks danced alongside such legendary figures as Martha Graham, Charles Weideman and Doris Humphrey.

Dance played an important role throughout Brooks' career. In the opening scene in Pandora's Box, the actress performs a short dance -- a riff off something Brooks had recalled from an earlier Denishawn routine. Later in life, Brooks would remark, "I learned to act by watching Martha Graham dance, and I learned to dance by watching Charlie Chaplin act."

Denishawn visited Detroit on two occasions -- first in March 1923, and then again in March 1924, where they performed at Orchestra Hall. According to newspaper accounts, the company enjoyed large crowds and received favorable reviews. Ultimately, it was as an actress that Brooks made an impression on the Motor City -- especially its film critics.

In the 1920's, Detroit was a three-paper town. There was the Detroit News and Detroit Free Press, as well as the now defunct Detroit Times. Also covering local arts and entertainment was a weekly called Detroit Saturday Night. Each of these publications reviewed films, and each went out of its way on more than one occasion to single-out Brooks. Their praise was more than just the era's usual ballyhoo. 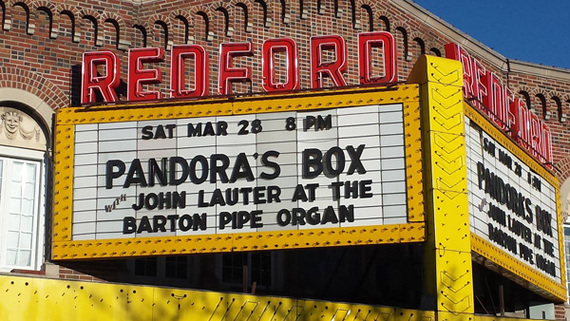 courtesy of the Redford Theatre

Charles J. Richardson of the Detroit Times, for example, reviewed The American Venus -- a 1926 romantic comedy which first brought Brooks her first reviews. Richardson wrote, "Louise Brooks, the former Follies chorine, makes her film debut in the production and does well in a small role. This Miss Brooks just now is the patron saint of all chorus girls seeking admittance into the sacred ranks of screen players." Harold Hefferman, writing in the Detroit News, also noticed the young actress. He wrote, "Louise Brooks, a black-haired boyish-bobbed entry ... cuts quite a figure."

Hefferman would go on to lavish praise on the actress throughout the 1920s. The Detroit News critic nearly gushed while reviewing Brooks' next film, A Social Celebrity. "Louise Brooks, possessing one of the most striking and expressive faces ever to come to the screen, plays the heroine in a saucily successful manner." Meanwhile, Richardson at the Detroit Times continued to express similar sentiments in his many reviews. Writing about the 1927 film, Rolled Stockings, Richardson proclaimed "Louise Brooks, as usual, is delightful to gaze upon." Back then, some critics wore their hearts on their sleeves.

The actress' admirers were not limited to the city's male critics. Ella H. McCormick of the Detroit Free Press also singled out the actress. "Louise Brooks is the nifty stepper," she wrote in May 1926. A month later, reviewing It's the Old Army Game, McCormick observed, "W.C. Fields scored a splendid triumph in this picture. A great part of the success of the offering, however, is due to Louise Brooks, who takes the lead feminine part." In her review of Just Another Blonde later that year, McCormick pronounced, "Miss Brooks is one of the best brunette contradictions to the lighter hypothesis that can be found on the silver screen."

In the mid-1930s, as her film career started to fade, Brooks returned to dance -- and once again returned to Detroit. With a partner, Brooks found work as a ballroom dancer in nightclubs, theaters, and other Midwest hotspots.

In August 1934, Brooks performed at the Blossom Heath Inn in what is now St. Clair Shores. Today, that venue -- located on Jefferson Avenue between 9- and 10-mile road -- hosts weddings and other events, but back then the Blossom Heath Inn was a popular road-house just outside Detroit city limits.

At the time of her month-long engagement, both the Free Press and News ran the following notice in their respective nightclub column. "Edward Fritz, proprietor of the Blossom Heath Inn, announces the engagement of the season's greatest floor show, headed by Louise Brooks, motion picture star, and Dario, creator of the Bolero from the motion picture Bolero. Several other new acts are included." It was a dénouement to a remarkable career.

Within a few years, Brooks would appear in her last film (a B-Western with John Wayne), leave Hollywood, and sink into decades of obscurity. In the 1950's and 1960's, Brooks and her three great European films -- Pandora's Box, Diary of a Lost Girl, and Prix de Beauté -- were rediscovered. Today, this once forgotten actress is legendary as Lulu in G.W. Pabst's 1929 masterpiece.

In a thoughtful article in the Metro Times in 2006, Michael Hastings wrote, "Has there ever been a more perfect, more tragic, more mythic fusion of actor and character than Louise Brooks' Lulu in Pandora's Box? The girl with the "black helmet" hairdo may not have been German, and she certainly didn't go on a date with Jack the Ripper, but just about everything else in Brooks' life leading up to and following her signature 1929 role became, in some weird, extrasensory way, the blueprint for director G.W. Pabst's masterpiece of sexual suggestion."

Detroiter's will have a chance to see for themselves on Saturday, March 28th when the Redford Theatre (17360 Lasher Rd) screens a 35mm print of Pandora's Box. John Lauter will accompany the film on the theatre's original 3 manual, 10 rank Barton Theatre Pipe Organ. Pandora's Box will be introduced by film historian and Detroit Free Press writer John Monaghan. A post-film discussion "about Brooks' lasting impact on film and fashion" will follow.

Detroit-born Thomas Gladysz is a San Francisco arts journalist and the Director of the Louise Brooks Society, an online archive and international fan club devoted to the silent film star. Gladysz has curated exhibits, contributed to books, appeared on television, and introduced the actress's films around the world, including the Detroit Institute of Arts. Gladysz got his start in journalism as a paperboy for the Detroit News.