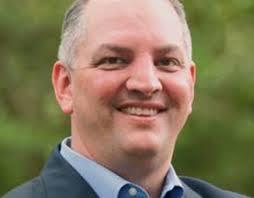 Years ago, Vitter was already assumed to be Louisiana's next governor as Bobby Jindal (continued to pursue) the presidency. (Jindal had been campaigning for president on the Louisiana taxpayer dime for his entire second term as governor.)

Last week, Jindal dropped out of the presidential race. Tonight, Vitter both lost the governor's race and declared that he would not run for reelection as US senator. Despite his hefty 10 million campaign chest (including his DC super PAC), Vitter could not overcome both his own stained reputation and the image of his being another Jindal.

It is expected that Edwards' first order of business as governor will be to call the Louisiana legislature into special session to confront Louisiana's budget crisis largely created by Bobby Jindal's presidential aspirations and his own selfish goal of being viewed as Not Raising Taxes No Matter What- including refusing to raise taxes that the Louisiana public supports. Moreover, Jindal would not accept federal funding for health care, and it is expected that Edwards will.

Edwards is conservative (pro-life; pro-gun), but he is also a Democrat.

I expect Edwards to also turn his attention to the unhealthy corporate tax breaks that Jindal had provided and protected and that are bleeding revenue out of our already poor state. Also, Edwards has already noted the Jindal-induced, critical need to support Louisiana's higher education institutions.

Edwards will have to work with a Republican legislature; however, he begins his term with obvious Republican support, not the least of which is the formal endorsement of Republican gubenatorial candidate Jay Dardenne. Still, Edwards' popularity is also fueled by a dislike/distrust for Vitter (also seen as a Jindal extension/repeat). So, Edwards definitely has important and challenging work before him in forming successful relationships within the Republican legislature.

As for Vitter's saying he will not seek another term as US senator: Such resignation is expected given the degree of Vitter's loss to Edwards. The Louisiana Republican Party took a few embarrassing hits in this governor's race, with Bobby Jindal's unpopularity, Vitter's tarnished past, and Dardenne's open support for Democrat Edwards.

And regarding public education:

The two BESE runoff elections have given us non-corporate-reformer Kathy Edmonston winning and non-corporate-reformer Mary Harris losing. So, on its face, BESE looks to be 7-4 in favor of the corporate reform agenda (8 seats are elected, but Edwards will appoint 3 seats). Under Jindal, Louisiana state superintendent and noted corporate reform promoter John White had a more comfortable ride- even after Jindal turned against Common Core- because White and Jindal shared secrets, which meant that Jindal could go only so far in challenging White.

In contrast, Edwards shares no secrets with White and has been openly opposed to White as superintendent. Surely White knows that Edwards can make White's heretofore-relatively-unchallenged, opaque Louisiana Department of Education (LDOE) reign miserable.

The term "audit" comes to mind. The last issue White wants is to have his free hand forced into genuine accountability.

Exactly how Edwards will approach White's LDOE chaos is not yet known, but White has to know it's coming.

Edwards' election is a sign of relief to me as a public school teacher and Louisiana resident.

She also has a second book, Common Core Dilemma: Who Owns Our Schools?, published in June 2015.