On hot summer days, when the stagnant, humid air of this old river city hangs like a shroud, even people with healthy lungs find themselves gasping. For more than 100,000 citizens who suffer from asthma, many of them children, the challenge is far greater.

Consequently, a pilot program, which has been in operation for nearly a year, promises to help public health officials - and patients - manage their cases better. It may even lead to cleaner air for the entire region.

Asthmapolis is the program's name. It was developed by Dr. David Van Sickle, who had done research on asthma and respiratory disease at the Centers for Disease Control and Prevention. In 2010, as a Robert Wood Johnson scholar at the University of Wisconsin in Madison when he came up with the idea of using small GPS devices, attached to pocket-sized emergency inhalers.

Every time a participant in the program pumps the inhaler, the tracking device sends a message to the Madison headquarters, where it is recorded and analyzed. "By collecting information about where and when people are using their inhalers," Dr. Van Sickle explains, "you would develop a new picture of asthma in the community that could be informative to public health. It would let you figure out where to target and how to evaluate your applied public health intervention."

Louisville's chief of economic growth and innovation, Dr. Ted Smith, heard about Asthmapolis when he was serving as a senior innovation advisor for the U.S. Department of Health and Human Services. His job was to "scan the industry for innovations that were changing health care," and that's how he met Dr. Van Sickle. When Ted came to Louisville to be the city's first Chief Innovation Officer, where he knew breathing disorders were a major challenge, he called Dr. Van Sickle.

Initial funding came from the Owsley Brown Charitable Foundation, Louisville-based Norton Healthcare and the Foundation for a Healthy Kentucky. A few months after funds were raised, the Louisville project won the 2012 IBM Smarter Cities Challenge and the roughly $400,000 in consulting services. Specifically, IBM's role has been to help local experts sift through some big numbers related to air quality and how it is affected based on things such as seasonal pollen outbreaks and traffic congestion. The crunching will continue as data from the individual Asthmapolis participants' inhalers is compiled and compared to the external factors.

This ambitious program is drawing national attention. Dr. Smith's boss, Mayor Greg Fischer, is an outspoken proponent of using data and information technology to improve the lives of his city's residents, described Asthmapolis at a White House forum on innovation in July. "We can smartly use data we use day in and day out and improve people's lives," he told them.

Asthmapolis has certainly improved the life of one of its participants, Donald Tyler, a 53-year-old former chef whose respiratory issues began so serious a few years ago that he was forced to retire. Like many people his age in Louisville, Mr. Tyler's problems began in the cradle, when he developed bronchitis that led to chronic asthma. He grew up in the city's Russell area, just west of the central business district. His neighborhood was home to some major employers - and air polluters -- including three large cigarette-manufacturing plants. Further west were even more problems from the chemical and plastics manufacturers that populated an area along the Ohio River called Rubbertown.

"There were good jobs," Mr. Tyler recalled, "But unfortunately the pollution wasn't so good."

He found out about Asthmapolis on a routine visit to his doctors at the Family Health Center in Louisville's Portland neighborhood. "I actually went to get a meter for my diabetes, and I just happened to see a sign. And it said get a free gift certificate. And you know me, I want anything free. I inquired about the special inhaler because actually I just had my inhaler refilled." He left with his Asthmapolis-issued device, as well as a charger for the battery.

"I'm also on Advair, which I inhale twice a day at six hour intervals," Mr. Tyler explained. "I do two puffs in the morning, when I wake up, then I do two puffs a night before I go to bed." During the rest of the day, he carries the emergency inhaler with him that contains the tracker. If he feels an attack coming on, he gives himself a puff.

Sometimes even the emergency inhaler isn't sufficient. His asthma is complicated by both emphysema (he's a former smoker) and chronic obstructive pulmonary disorder (COPD). He's well aware of the warning signs, and a call to 911 is sometimes essential. But because he lives alone after his wife's death of cancer earlier this year, Tyler feels more confident now that he is part of the Asthmapolis program.

"Then what they will do is they will email me to tell me how I'm doing. Either my asthma is out of control or it's okay. And I go on my computer once a week to find out what they say."

The level of confidence that the "smart inhaler" has given Mr. Tyler is one of the great advantages of the program, says Dr. LaQuandra Nesbitt, the city's director of public health and wellness. In an interview she explained how.

It helps physicians "better manage their asthma patients by empowering their asthma patients. ... Asthmapolis has a website that both the patient and the physician can log into, and the patient can see, OK, I've used my inhaler 10 times this week and the majority of time is when I'm at my grandmother's house. My grandmother smokes. Smoking must be a trigger for me. So it helps the patients by doing things like that and making sure they're in a smoke-free environment. But it also allows the physician to look and say, this kid is using his inhaler ten times 10 week, is only on one type of medication, maybe I need to add a second. Then when you add the second, you're not just relying on the mom and kid to tell you how many times they're using it, you [the doctor] can actually see from how many times they've pumped it how many times they've used it and where they were using it."

Crunching those numbers is a big part of Asthmapolis, and so far only limited results have been measured, although Ted Smith is optimistic that the results will have an impact on the health of the city. Certainly it fits in well with Mayor Fischer's priority of making Louisvillians healthier. As he recently explained: "Improving health is everyone's business, and there is more to health than health care. When we improve social factors such as education, income, nutrition, housing, and neighborhoods we improve the total health of our community."

But the need for improvement is imperative. Just last week, the Greater Louisville Project, which studies critical local issues, issued a report called Measuring the Impact of Health on Louisville's Competitiveness. The findings were deeply disturbing - residents experience as much as a 13-year gap in life expectancy depending upon where they live. And where they live has a lot to do with their economic and educational status. It so happens that the less affluent areas also experience more serious air pollution problems which in turn increases the burden of asthma

In such an environment, Asthmapolis is a high-tech component, and since Louisville is the only major city that has used it on a cross section of the population, the findings are eagerly anticipated. In his White House speech, Greg Fischer urged others to seek out innovations. "If officials and community leaders don't move toward new breakthroughs, you're going to be operating in the swamp the rest of your life." 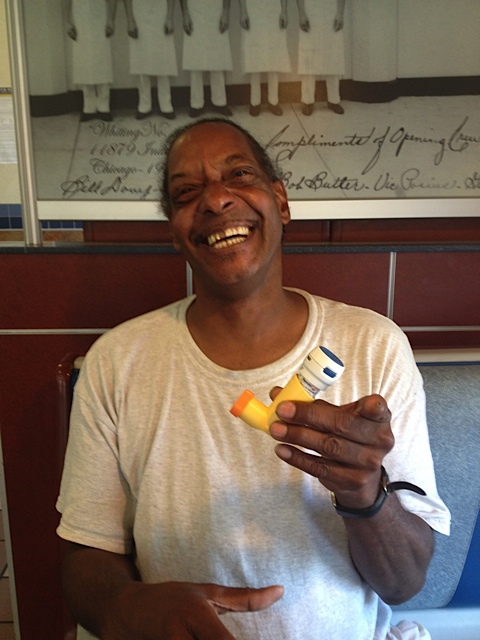 Donald Tyler of Louisville with his Asthmapolis device and inhaler. (Photo by Keith Runyon)