In the tributes following Muhammad Ali's death on June 3, we're reminded that this man was The Greatest for people around the world. For those of us in Louisville, it has been a special privilege to grow up and grow old along with him, in his own hometown. 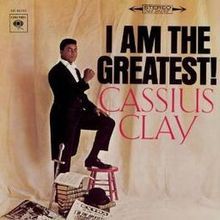 Certainly that has been the case for me. My first exposure to Ali came in the late 1950s, when he became something of a teen celebrity on WAVE-3's weekly boxing series, Tomorrow's Champions. Hosted by Ed Kallay, the amiable announcer who also was the star of a weekday kiddie program called Funny Flickers, the boxing show on Saturdays featured Cassius Clay from the city's West End.

On Friday, Sept. 9, 1960, I -- like many other local schoolchildren -- got out of my fifth grade class so my mother could take my brother and me to Standiford Field to welcome "Cassius," as we called him then, home from the Rome Olympics. Around his neck he wore the gold medal he won for boxing. The Courier-Journal's account of his triumphant return noted: "Seldom has Louisville showered so much attention, praise and adulation on one of its own -- and such a young one at that."

For a child in Louisville, it was only the beginning of many opportunities to meet, to watch and to feel great pride in the man whose mother nicknamed him "Gee Gee," the first words he spoke. Again and again over the years, our paths would cross. We were never friends. I am sure he never knew who I was, but I always felt a special kinship with him.

After his triumph in 1960, the city's awareness of Clay grew as his fame as a boxer and celebrity mushroomed. For a time, it was just a local diversion in a far greater story that was playing out nationally: the Civil Rights movement.

For pre-teen children like me, there was tremendous pride that Clay brought to our hometown. But I noticed that older people expressed not only pride but also increasing concern. In those days, African Americans were expected to be polite, even deferential, and especially to white people.

Cassius Clay was never that -- and all of us today can give him great credit and thanks for that.

By late 1963, he was a bona fide national celebrity. Jack Paar invited him to be on his TV show on Nov. 29, 1963, one week after President John F. Kennedy's assassination. It was quite a night. Paar had many good things to say about the 21-year-old Louisville boxer, and during the program, Clay sang while pianist Liberace played.

That same fall, Clay released his own LP, "I Am the Greatest," in which he read poetry, sang a prehistoric version of rap, and was accompanied by a chorus that repeated, "Hail, Cassius!" One Saturday morning, my mother took us downtown to Variety Records on Fourth Street near the Kentucky Theatre. There he was, sitting on a stool and signing the albums with a Magic Marker. There wasn't much of a crowd that I recall, but it would be the last time I ever saw him without a flock of people gathered around. I wish I knew whatever happened to that album.

In February 1964, my brother and I got to stay up late on a Tuesday night as we huddled around the radio in our kitchen to listen to Clay beat Sonny Liston to become the heavyweight champion of the world. His cries of "I am the greatest!" ring in my ears still, just as they did on that night 52 years ago.

However, the hometown cheer that had greeted Clay for the past few years began to chill that same winter. The Courier-Journal's Sunday Magazine featured a story by Robert Dietz headlined: "Black Muslims Here Say: 'Integration Is a White Man's Trick.'" In it, Clay was quoted expressing sympathy for the budding Nation of Islam. That story generated plenty of chatter. I remember it came up in my Sunday School class and again in my eighth grade class at Seneca Junior High, where another African-American athlete, Westley Unseld, was the star of the basketball team.

When Clay, known by then as "the Louisville Lip," announced that he would join the Nation of Islam, acquiring first the name Cassius X and then, finally, Muhammad Ali, there was an uproar in Louisville. A news story published just a few days after he beat Sonny Liston contained a long interview, which included this quotation from Ali: "A rooster crows only when it sees the light. Put him in the dark and he'll never crow. I have seen the light, and I'm crowing."

Ali also began his refrain about peace that seemed odd at the time for a boxer, yet came to be emblematic of his persona as the decades would pass.

"You call [us] Black Muslims," he said. "I don't. This is a name that has been given to us by the press. The real name is Islam. That means peace. Yet people brand us as a hate group. ... That is not true. Followers of Allah are the sweetest people in the world ... All they want to do is live in peace with the world."

It wasn't just some in Ali's hometown who were troubled about this youngster from Louisville.
"When he joined the Black Muslims and started calling himself Cassius X, he became a champion of racial segregation, and that is what we're fighting against," said Dr. Martin Luther King -- then fighting for the Civil Rights Act -- in a Courier-Journal story published March 20, 1964.

As his fame continued to grow, Louisvillians saw Ali more often in headlines and photos than in person. In fact, I didn't see him again until Thanksgiving 1968, during a weekend trip to Chicago. There was a huge crowd outside the Palmer House in Chicago's Loop, and in the center was Ali, signing autographs and accepting cheers with a big smile. He was by then mired in a legal battle with the Selective Service during the depths of the Vietnam War.

I was sympathetic with him; I had just registered for the draft the month before when I turned 18, but I was against the war and didn't want to fight the Viet Cong, either. After claiming conscientious objector status because of his religion, Ali was arrested, banned from boxing, and would take his case all the way to the Supreme Court.

I was in The Courier-Journal newsroom on Monday, June 28, 1971, when the bells on the teletype machine rang out, signifying a bulletin. Our headline the next morning would read: "The Supreme Court ... On Ali's Draft Refusal: Conviction Is Reversed." Among those voting in Ali's favor was Kentucky-born Justice John M. Harlan, who had been deeply influenced by reading The Autobiography of Malcolm X.

The 70s would be a bumpy decade for Ali in Louisville. His public image remained weakened by issues in his private life. He was seen less often here. I covered one of his fights -- in January 1974 against George Foreman at Madison Square Garden -- but I saw it on a big screen at Freedom Hall, where a crowd had gathered. Something worth noting about that fight: the audience was nearly all African American. It would be years until most white people in Louisville returned to Ali, as he became an international figure for humanitarian causes.

At the Kentucky Derby sometime in the late 1990s, I remember seeing him sitting alone at a table on Celebrity Row, so I sat down with him and we chatted for a few minutes. Already the impact of Parkinson's Disease had affected him, and the once feisty "Louisville Lip" I remembered from the record shop years before had faded some. He was sweet and still funny.
"You aren't as dumb as you look," he told me.

In 2001, when Will Smith's hit film Ali opened in Louisville, we went with our 12-year-old son, Lee, to the world premiere and the party afterward at the Brown Hotel. Muhammad Ali was still The Greatest -- a reputation he enjoyed throughout Louisville once again -- and the international symbol of peace and brotherhood. My son got a moment with him, just in time for a photo that is now a cherished memento. He offered a greeting I remember well.

"You're not as dumb as you look," Ali told him.

I realize now that the generations had come full circle, as my young son -- just about the age I had been when I first met Ali -- had come under The Champ's spell. Future generations will no doubt be drawn to the legend and legacy of Muhammad Ali.

We were the lucky ones. We got to share it with him as it happened, in Louisville in the age of Ali.