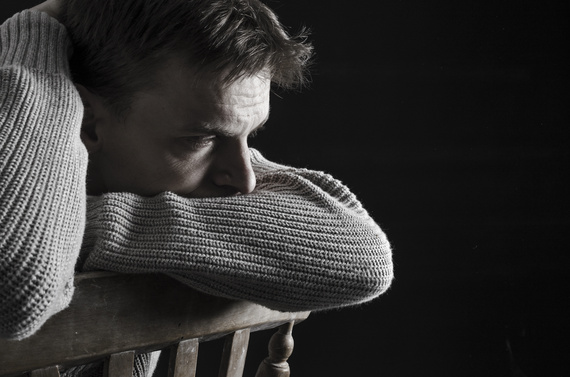 I had just stepped into my studio office with a mug of hot coffee in one hand when my cell phone rang. It was my mother. I checked the time before answering -- 7 a.m. In her old age she never rose before 9 a.m., with breakfast at 9:30 at the table that she had laid out the night before with neat place mats, silverware, bowls, and choices of cereal boxes for her and for my dad. She keeps a regimented schedule. A phone call at 7 a.m. meant bad news.

"Hi Peter, how are you?" she said, ever formal in her phone calls.

"Your father and I were just wondering how you are," she said.

"We waited for two hours before calling you because we didn't want to get you out of bed. The South Dennis Police knocked on our door at 5 a.m. this morning and got us out of bed. The police officers told us to that we needed to call Detective Jones at South Beach Miami Crime Scene Investigation unit immediately. We want you to call him. You're the minister. You'll be better at this."

"What, what's going on? Is it Andrea," I asked? Andrea lived in South Beach.

A wave of weakness swept through me from the floor up, turned my stomach, swooned my head, collapsed my knees and I fell to the floor. I dropped my phone on my way down. I knew. I felt it. Andrea had died.

"What was that? Did you fall? Peter! Peter! Are you alright?" I heard my mom's voice from far away. I heard my own voice sobbing as I struggled up and out of my collapse.

"We don't know. You'll need to call the detective for us," she said looking for my commitment.

"I'll call now," I said. "What's his number?" I thought, "CSI means murder?"
I'd been around a lot of death in my ministry -- slow death, unexpected death, old death, young death, painful death and beautiful death. I'd mid-wived more than a few souls to the other side using my own Near Death Experience as my guide. I was and am good at death and dying; it's a hell of a thing (or a heaven of a thing) to be good at, but I wasn't so good at my own sister's death. Death that touches us personally always hurts deeply.

Mom gave me the detective's number and I called.

The detective told me that Andrea "had died under suspicious circumstances two nights before" in the two-star hotel where she was living and ran the night front desk. When she didn't show up for work the manager went looking for her. He had found her dead in a bed in another room -- a room where she did not belong. The day before she died she had been selling flowers on the street where she was a familiar face selling flowers, and that night had had a fight with her ex-boy friend.

"Was she murdered," I asked?

"We are treating this as an unattended death and we won't know the cause of death until the autopsy in about six months," the detective said.

My brother and I dropped everything, booked separate flights, met up in Florida and drove a rental to the two star hotel. It was surreal. At the hotel door we were met by a mourner, her friend, who had been born to a mother who had been prescribed and had consumed Thalidomide to treat her morning sickness when she was pregnant with him in the 1950s; his face and head was as narrow as a fish-head but all the parts -- nose, eyes, mouth and ears were in their right places. He rushed forward saying, "You must be Andrea's brothers! We heard that you were coming. We loved her so much. I am so sorry."

He embraced me. Instead of hands and arms extending to me from his shoulders -- he had flippers -- short flipper-hand-arms with stubby fingers. He patted my shoulder with flapping motions as he led us inside to meet the hotel manager who came out from behind the desk while expressing his condolences when he saw us come in, and urged us to accept his hospitality to free room or rooms for us both in his hotel, and saying, how much everyone in the hotel loved Andrea; he loved Andrea; and she was a good worker who worked the night shift in exchange for her rent; and how they were like a family and how sorry they all were, as he led us down the hall to her room.

All the doors in the hallway were open and the residents nodded to us, or called out their condolences. I was incredibly moved by the three most beautiful black women (transsexual-working-girls) who were dressed in matching blue sequence halter-tops and short shorts and makeup who emerged from their room to give us hugs of sorrow. They were crying for my sister, and for themselves and their love for her, and so we stopped and hugged and cried together.

Down the hallway the manager opened the door to the room where Andrea had died. We ducked under the yellow police tape. The room was bare -- spare a bed, bureau and mirror. We stayed a moment and said a prayer. There being nothing more to see or say there we followed the manager to Andrea's door that he opened with his universal key. We ducked under the yellow police tape and entered her one room with its bed, her clean clothes neatly stowed in her bureau drawers, a box of letters from her life, her artist supplies, and her few worldly goods, and 10 thousand fleas.

Suddenly my brother and I were under assault being bitten all over by leaping fleas. We panicked our way back into the hallway, slammed the door, and stomped and slapped, and brushed. We decided to go buy a bug bomb and meet the detective, who told us nothing new other than they were investigating the verbally violent fight that Andrea had with her ex-boy friend who was said to have maybe hit her, and handed us a brown paper bag with her name on the outside containing her belongings that were with her when she died.

We bought that flea bomb and bombed her room, checked into a hotel a block away, came back, sorted and collected her goods, found that box of letters including all the letters I had, we had, ever sent her in her entire life, packed everything in boxes, and shipped them home to Cape Cod.

A mortuary eventually shipped her ashes to us after they had completed her autopsy, and we buried her on a rainy May day near our grandparents. We waited and worried for six months until her 'cause of death' arrived -- heart attack, not murder.

Andrea had been estranged from our family for decades. We knew that she was sober and had been for decades, and we had begun repairing the damage done from our estrangement. We had been talking with her on the phone, and our parents had visited her for two days in the previous year. I had been hoping to move to South Beach for six months to get to know her and maybe write a book about her incredible life about which I was just learning.

My mom said, "At least I now know where she is and I don't have to worry about her any more. She's with God."

Andrea's death brought peace and rest to my mom's heart.

Andrea is at peace and at rest, and she is soul, and she is well, and she is loved. I'm glad that she wasn't murdered, and sad and sorry that she died alone and before we could fully reconcile -- if we could. I'm still sad about her passing and mourn her daily, and carry her in my heart.

One of the odd things about Near Death Experience is that even though I know God knows me now, and knows all of us eternally and intimately now, and that Andrea's soul lives in God and with God, even so I grieve her loss. You might think that knowing what I know about death, God, Love and the Afterlife that I might not grieve. But I do because grieving comes from loving. You grieve whom love. Love and grief come together although they arrive at different times. You can't have one without the other.

More:
GPS For The SoulgriefLove and RelationshipsLovedealing with grief
Newsletter Sign Up