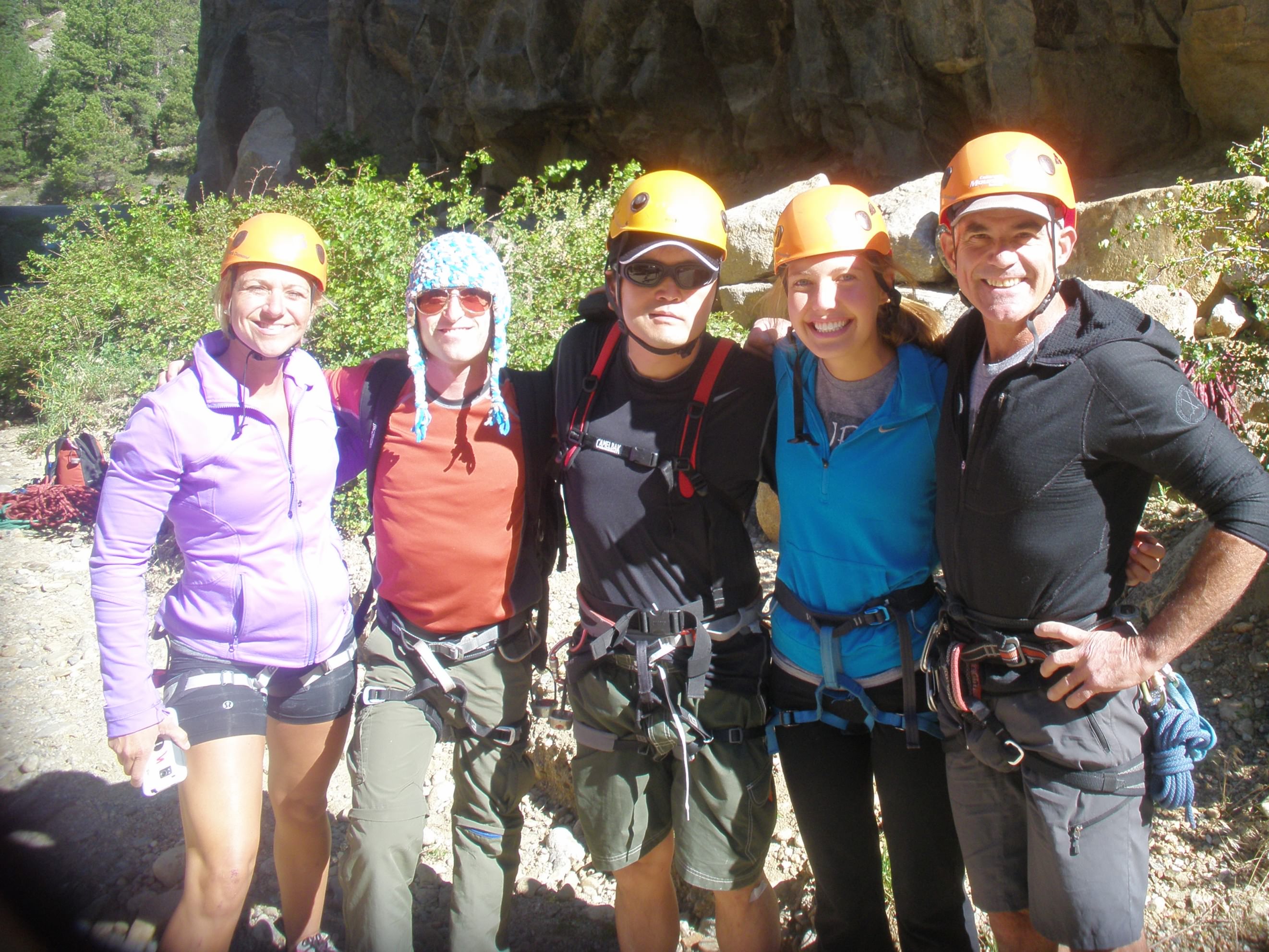 My heart is racing. "How excited and scared are you?" I say.

Our lead-climbing instructor set the first pitch: "Bailey's Overhang" on Castle Rock in Boulder Canyon. Pumba and I are waiting to climb while the second of our four-person team ascends. Pumba will climb last and clean the cams from the route.

Pumba is named after the sweet warthog who is Simba's guardian in The Lion King. I don't know her given name because we only use nicknames in rock-climbing. My nickname is Hippy because my left hip bone was surgically removed when I was a teenager. This is the last of our five-day rock-climbing trip composed of about 15 strangers.

In between shouts of encouragement to S'mores working her way up, Pumba shares how rock-climbing gave her peace when nothing else worked. I share how it's now the only sport I can succeed at after a childhood saturated with athletics, then a bone saturated with bad cells. Our necks are tiring from staring up at the rock, so we move further from the wall and into the warmth of the early sun. We've completed the most challenging routes in this order, Pumba after me, and the climbing instructors teamed us together on this "graduation day" because of that.

We see a different team from our trip on an adjacent climbing route, and wave up to them. "I hope everyone else takes pictures so we can see their routes," I say.

Pumba's face brightens as she reaches into her bag for her camera. "I totally forgot I'm the photog!" she says.

I love teasing her for forgetting her designated duty, though she has taken plenty of pictures of me climbing towards the sky. Pumba told me that she smiled up to the sky through the window the time she fell ill, her body nonresponsive and her mind stuck in time. "I could have kept that image forever," Pumba said.

S'mores reaches the top so I switch my left sneaker, which has a 2.25-inch lift because my femur migrated up without a bone to stop it, with my much leaner climbing shoe. I shout the proper "belay" and "climbing" commands, then look back towards Pumba and the gigantic Rocky Mountains behind her that make me both so small and grand. 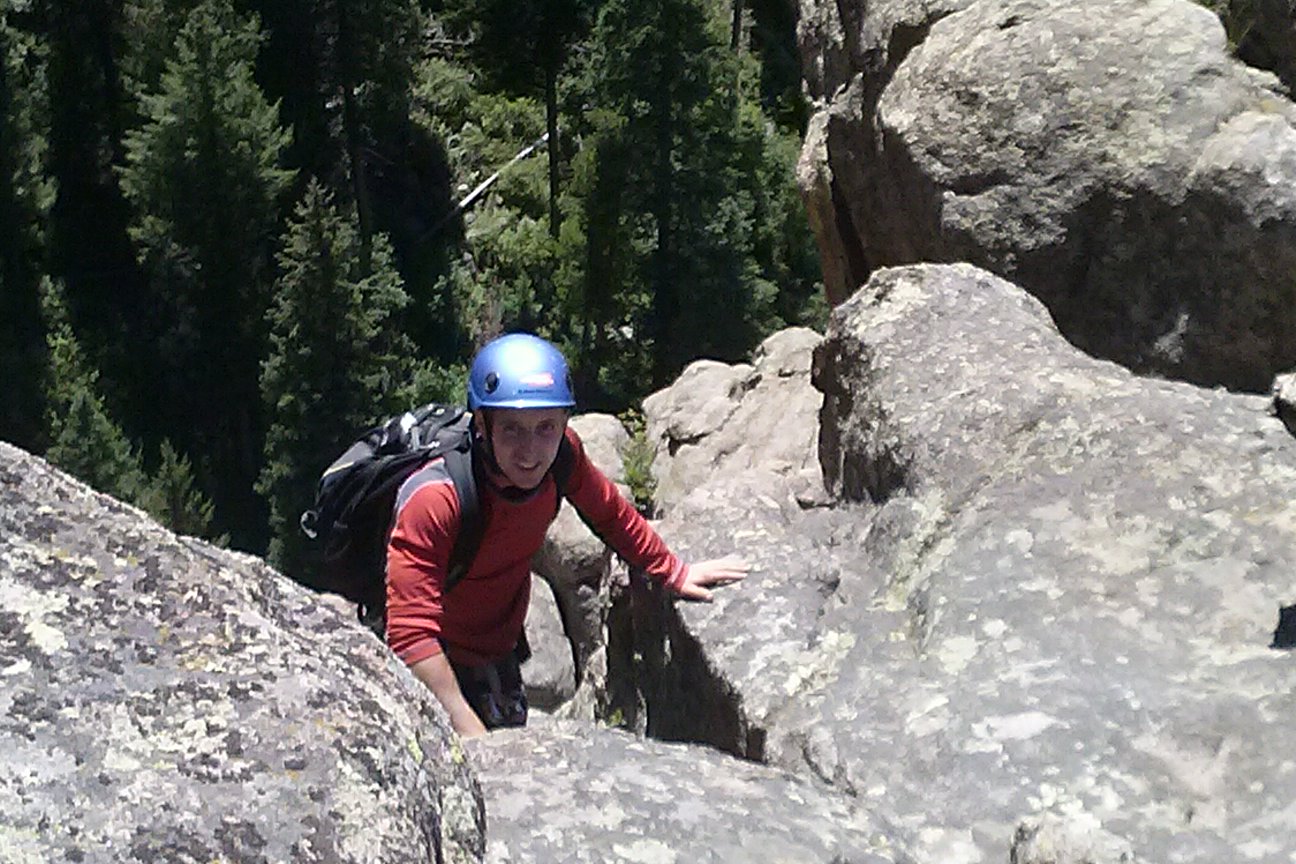 I turn and face my rock, testing all the handholds and footholds. My rope is tight, but to me it's never tight enough off the start. If I slip when there is too much slack then I can reach the ground and land on my left leg. I envision the few remaining hip bone fragments shattering the way a rock can when water becomes trapped inside and freezes.

I choose my approach and make three quick moves to reach a safe height, and feel my rope tighten again. I breathe deep while Pumba is losing her breath cheering for me.

I straddle a piece of rock with vertical cracks on each side, my hands and right foot jammed in and slowly creeping up as my left leg remains limp. My left leg functions enough to push my weight up, sometimes after a manual assist for position, but I often forget it is there. 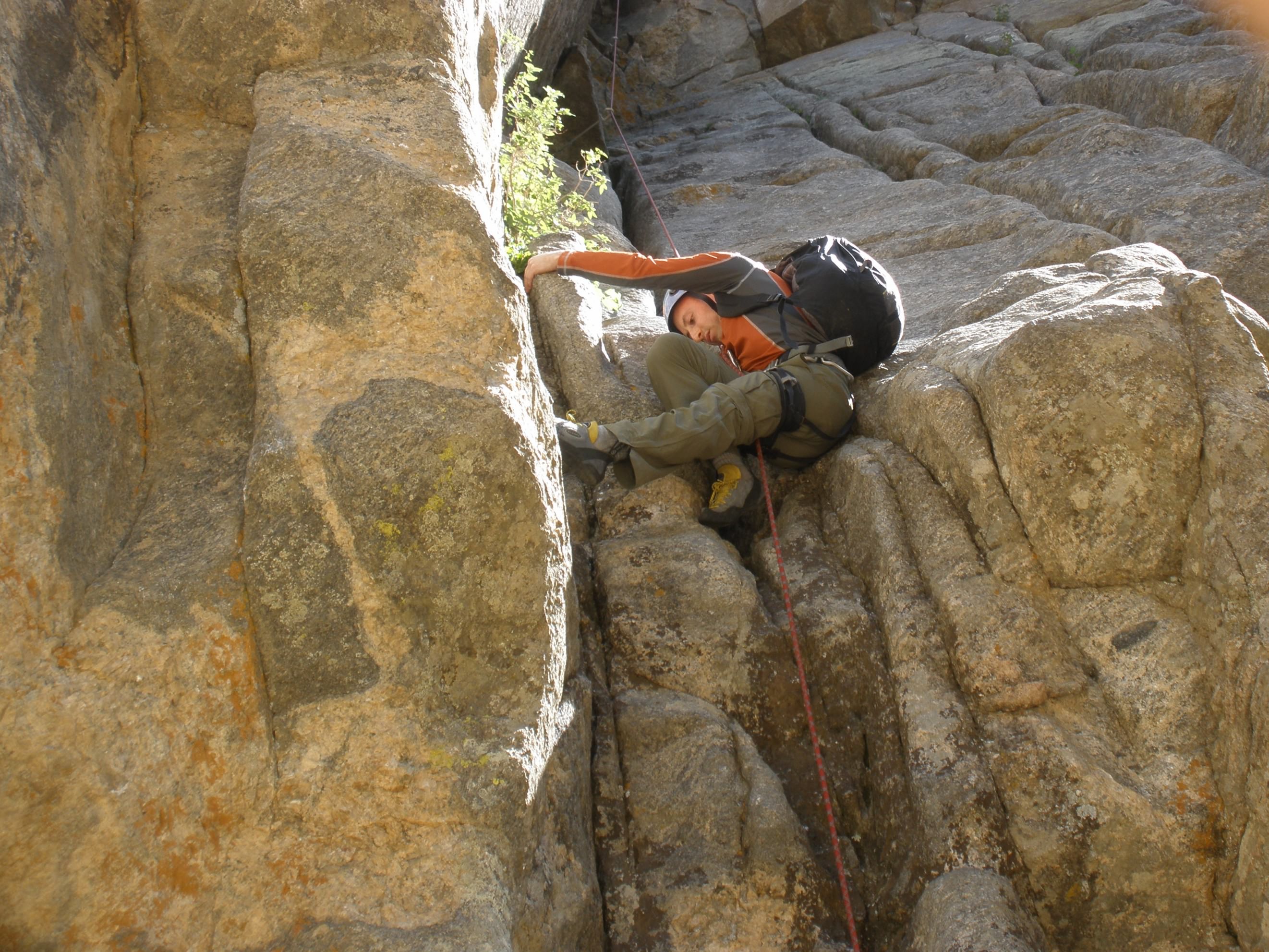 I look down at Pumba. I can no longer make out her bright blue eyes and matching ankle bracelet. Since this is the first time we aren't top-rope climbing, she isn't belaying me and looks too free. She is now preparing for her climb, to reduce the boredom while on the ground by herself and without her Simba to look after. My heart rate steadies and I return to the rock.

I have reached larger holds. I pull my way up by pinching my scapulae and throwing my elbows down until I can plant my right foot and do it again. My instinct is to bypass using proper technique and overrated leg limbs, in favor of pull-up power.

I insert my right foot into a good hold, a narrow crack. I pause to wipe my hands and shake the tension out of my arms. When I'm ready to move, I cannot pull my foot out of the crack and trying only makes it snugger. "I'm stuck!" I yell down to Pumba. My heart races again. I "take" so my belayer -- the climbing instructor far above me -- holds my weight. I close my eyes, take several breaths, and then pull my foot free.

I reach a slippery slope with few holds, another crack, and a rock wall to my left. I could really benefit from a fully functioning left leg here. I try climbing from every position I can think of, trying different types of leverage. Several minutes pass and my belayer yells down, "Is everything okay?"

No, it isn't. Pumba and I were placed in this Bailey's Overhang team because we are among the trip's stronger climbers, but this is too hard for me. I cannot climb up. But unlike in top-rope climbing, there is no quitting and coming back down now; I cannot fail. I curse and punch the wall, scream at it, drive my helmet into it. If I cannot climb up then I will fail for my entire team. I am terrified.

I wiggle and crawl up using every body part that could possibly make contact with the rock, a centimeter at a time. My belayer understands their importance, and tightens my rope each crawl so I never lose these tiny accomplishments. Dozens of centimeters later, Pumba screams, "Way to go, Hippy!"

I reach Bailey's Overhang, a huge, jutting rock adjacent to where I've been climbing, creating a narrow gap in between that I must climb through. But my helmet won't fit, which means my backpack definitely won't. I laugh at myself for packing my bulky, lifted left shoe. I often joke that I keep Skittles inside the lift for a snack, though a rocket propeller would be more useful now.

I work away from the gap by hanging from decent hand holds. When I'm confident I'll fit through this wider space, I try climbing up. I've been climbing for over 30 minutes and my strength is compromised. I will have to rely on my left leg.

I throw it in front of me onto the other rock wall and squeeze my body. Now tightly pinched, my arms are free. I see a jug just below the ledge of the overhang. I grab it, match hands, and lift off to the sky.

I make it atop the ledge and see S'mores. "You're almost there, you're so close!" she says. I have one more move to make. I tell my muscles to pull me up and they don't respond. Ever since my hip bone was removed, I have compensated with upper body strength, and I hate not having it now. I am done with this. It is too hard.

I think of Pumba below, ready to climb and surely bored. I look down and position my head just right to see her as a spec through the gap next to the overhang.

I refocus on the wall in front of me. I can't pull, but I can push, so I position my hands chest-high and mantel. I hold my breath and push until I stop elevating, then collapse forward next to S'mores. We are sitting 100 feet above the ground on an area of flat rock about five by three feet. I tell the instructor to tie me in tight "with as little rope slack as possible," and put my head on S'mores' shoulder. We stare ahead at the vast mountains that would never get old to us while Pumba begins.

S'mores tells me about recovering from her brain injury. She has regained her muscle mass after atrophying to almost nothing. Like me, it sickened her when her muscles wouldn't respond after instructing them to do work. That fear provides us motivation, perspective and spirit.

S'mores times Pumba on her watch. Pumba will apologize for making us wait 50 minutes, but we would be content sitting here for hours. Two days earlier I completed my toughest climb to date while Pumba belayed me. I asked her to "take" at least 15 times, though Pumba climbed after me and took even longer. I was not bored watching her persevere. I was inspired, and as proud that she finished as I was that I had.

The instructor lets us know that Pumba has made it above the overhang so we cheer like mad. I mimic S'mores: "You're so close!" I scream down.

When I see Pumba about to make her final move to reach our spot, I move closer to S'mores to give Pumba room. Out of breath and energy but not smiles, Pumba collapses next to me. She is heavier from collecting all the cams. I touch her shoulder and tell her she is awesome.

My team takes five hours to complete all four pitches and reach the top of this mountain. We are the final team to make it up, two hours later than the first arrivers. This is among the best, most terrifying and challenging days of my life, and I love them for living it with me.

I switch my climbing shoes with my sneakers, void of Skittles. I lie on rocks next to Pumba and S'mores and stare at the sky, my heart now beating slow and steady. I smile. Let me keep this image forever.

healthy livingGeneration Why
Go To Homepage

I write and I love jellybeans, cancerslayerblog.com