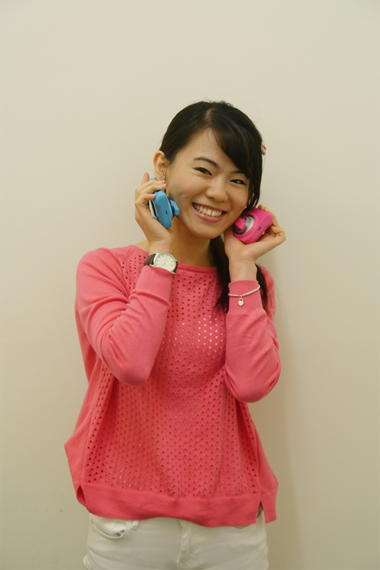 Sending kisses long distance has become easier. In the past, people used written letters (maybe a woman left her lipstick imprint on an envelope sealed with a kiss). Then there were the sounds of kisses on the telephone, xoxo on emails, air-blown kisses on the internet, Skype and more. Now researchers have further developed new ways for people to communicate their affection and intimate feelings long distance in the digital age.

Developers at Lovbotics created the "Kissenger" system billed as "The World's first mobile kiss messenger" which lets users press their lips into the soft lips of a cute little round device laden with sensors. When nested to a mobile phone with a special app, Kissenger transmits the pressure of their lips through a real-time data stream over the internet to a person far away who holds up their own little device to their face. A small module with the device even reproduces the sender's scent (could be body odor or perfume) and the receiver--it is said-- can even detect the sender's chemical pheromones.

At the Goldsmiths University of London conference "Love and Sex With Robots" held December 19-20, 2016, one of Kissenger's developers Emma Yann Zhang of the City University London demonstrated the kissing machine robot to audience members eager to try it for themselves. Said one kiss recipient, laughing, "I miss the wet feeling of a kiss."

Zhang said she and other developers (at Japanese and Malaysian universities) aim to someday implant Kissenger in a robotic head made of silicone or in a humanoid robot like Anita, the character in the popular British/American television series Humans. She mused that Kissenger could also be useful for online dating if a woman wanted to detect if a man was a good kisser before she even met him (Zhang felt this factor was especially important to women).

The conference also yielded some other gadgets for communicating affection long distance. Teletongue, a project being developed at Keio University in Japan, lets users lick what looks like a human ear (made using 3D modeling) which has an embedded microphone and sensors. The sound of their licking--and the vibrations--are transmitted through a computer to a friend who holds a "lollipop" device. The developers, including Daisuke Yukita, say the device is a "natural way of enhancing and enjoying intimate relationships."

These devices with their promise of virtual affection fit right in with the idea of sex robots (sex robots with artificial intelligence aren't ready yet but are slated for production by California's RealDoll, Abyss Creations sometime in 2017). Whether virtual kisses and digital licks are a good substitute for the real thing---now that can be debated, but they certainly look like fun.

Professor and author of MY FAIR LADIES: FEMALE ROBOTS, ANDROIDS, AND OTHER ARTIFICIAL EVES