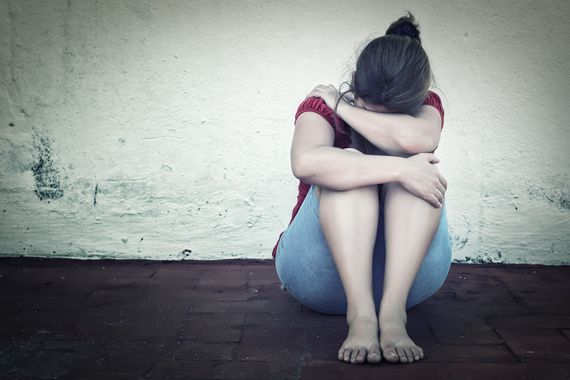 As women line up to see Fifty Shades of Grey, I feel they've been cheated. There is nothing new, unique, or even creative about Fifty Shades of Grey. It's just the latest installment of pop culture messages that teach girls and young women that truly hot and irresistible love includes some element of violence and danger.

These messages start when you're little with Beauty and the Beast. As a girl, you learn to be nice and patient with an abusive partner, and as long as you remain so, he will change his behavior and transform into a Prince. It doesn't matter that he's throwing things at you, locking you up in a room, not letting you eat without him, not letting you get to your father... he will change... you just need to tame him. But Beauty and the Beast isn't real...

When you get a little older, these messages continue with the Twilight series. You see Bella fall for a vampire with a basic instinct to kill her. You learn to put up with stalking and harassing as you try to prevent him from killing you. To do so, just leave your friends, family, and identity behind to become just like him (a vampire). Bella and Edward teach you not to get too close, because that would end in death. In fact, when they eventually do have sex, he almost does kill her! Let's get real. Bella displays three classic traits of a victim in an abusive relationship: She has intense low self-esteem; She loves the bad-boy (she only starts to have feelings for nice-guy Jacob when he turns into a werewolf); and she's thrilled by the violent and dangerous acts of Edward (they aren't red flags to her at all). Edward displays four hallmark traits of an abuser: He warns her away from him, only to increase her desire; He is possessive and tries to isolate her from her family and friends, he even incapacitates her car so she can't get away; He stalks her constantly and when he can't, he uses his vampire superpower to stalk her through others' thoughts; and he has an intense temper but it's not his fault because he's a vampire. But Twilight isn't real...

Now that you're an adult, the messages are solidified with Fifty Shades of Grey. Emotionally intimate and tantric sex? Nah... who wants that? Let's just keep getting abused. Some more stalking, some threats, get tied up for a day (literally)... You're now a sex slave who hasn't consented to it, but you love it, right? Christian Grey also happens to show classic abuser signs: he warns Ana away by telling her he's not good for her, he stalks her by deliberately tracing her mobile phone to find out where she is, and he attempts to control and isolate her by having her sign a non-disclosure agreement (so that she can't discuss what goes on in their sexual relationship). Super healthy! Then to top it all off, he actually rapes her: "'No,' I protest, kicking him off." Christian replies, "If you struggle, I'll tie your feet, too. If you make a noise, Anastasia, I will gag you. Keep quiet. Katherine is probably outside listening, right now." You learn that it is not really rape if you like it and as E.L. James writes, Anastasia does feel pleasure while she's being raped. That message isn't confusing at all when we are trying to combat college campus sexual assault on a national level. But Fifty Shades of Grey isn't real...

So what? If these stories aren't real and have no influence on our cultural representation of romance, why are they the same story? Cultivation Theory tells us we construct our ideas of reality through the images and messages around us, whether we are conscious of it or not The popularity of these stories alone displays how much validity girls have given to these characters as representations of true love and it really makes it clear how the problems with sexual and romantic violence in our culture get covered up in ways that we don't even notice.

Don't get me wrong. I love a hot, intense, romantic love story as much as anyone... but Fifty Shades of Grey is not it. There are many movies that are truly hotter. More importantly, we rarely get the message that you can have hot and satisfying sex without experiencing pain or humiliation. In fact, both men and women report being more sexually satisfied during sex with someone they love and trust