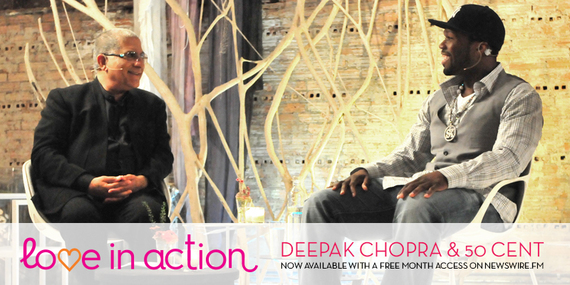 50 Cent. The name brings to mind an image of one of the most famous American rappers of the last decade. Hearing the name 50 Cent brings to mind heavy handed lyrics about his life, his come-back from the brink of death, and, of course, your birthday. But the rap career and the headlines do not fully define the man. 50 Cent's philanthropic endeavors and his interest in conscious capitalism don't always get the same kind of press attention as his top charting hits.

Deepak Chopra offers us a view of 50 Cent's newest endeavors in this episode of NEWSWIRE.FM's "Love in Action" Series set at the Deepak Homebase in the ABC Home mezzanine level studio.

"I grew up without money but I didn't grow up hungry," begins 50 Cent's PSA about the growing disaster of famine; a reference to the less than desirable conditions in which he grew up. 50 Cent never knew his father and his mother's murder when he was 8 years old left him to deal with emotions that many adults struggle to process, and those struggles were just beginning. He could have continued to dwell on the harsh realities of his life but instead he made the necessary changes to turn his life around when his son was born. Today, his message is clear; no matter how bad things were for him, they could always have been worse. He harbors no illusions as to how rare his success story is.

It was a trip to Africa that 50 Cent claims really inspired him to act on behalf of others. "I saw things that were far more extreme as far as poverty was concerned than what I've experienced and after that I had a little more interest in what was going on," he explained. From there he developed SK energy drinks. The business model that supports SK energy drinks is based on the idea of giving back. Every purchase, not only leaves the consumer with a quality product but also a portion of the proceeds help to feed a person living in extreme poverty.

50 Cent himself is a success story; the changes that he has made in his own life are inspiring in and of themselves. But that is only a fraction of the story. "This story of redemption can be a story of redemption for many millions of people," Deepak tells the audience. Improving his own life wasn't enough, it was important for 50 Cent to ensure that his success could be shared with those who do not have the means to help themselves in the same way he did. It's a feel good story from every angle.

This is a blog series produced in partnership with Love in Action, a video series with Deepak Chopra and NEWSWIRE.FM. Click here to watch the full interview.