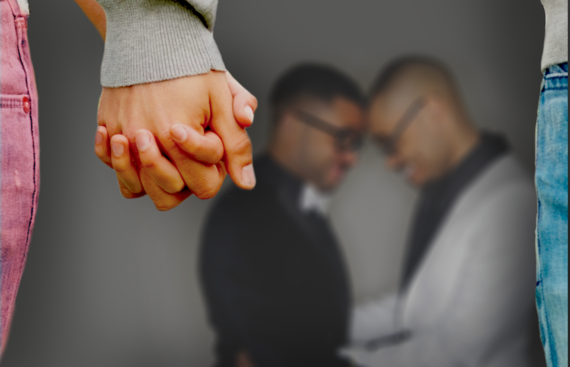 A good friend of mine called me a few days after our wedding at the 56th Annual Grammys to congratulate me. She is heterosexual, married, and the mother of two - A representative of the largest part of my inner circle; heterosexuals, married with children. I know some would like to believe that we all live at the end of a rainbow but that isn't my case - at least until the weekend. So my sudden nuptials in front of 28 million Americans took most of our loved ones by complete surprise - a sucker punch. And they all wanted to know what was it like?

Did a dove break through the clouds and light on our blessed gay shoulders?

My partner and I had been in a committed relationship for 18 years. The first seven of those years we lived in secrecy, pretending to be roommates, playing the roles of heterosexual men. We hung out with the Boys. A part of the pack, hunting out the most beautiful women in the club, sharing our shameless observations, and beating our chests, but we always left for home together. We participated in the charade just long enough to throw off the scent.

Playing straight was probably the biggest roles of our careers.

When we finally found the courage to come out, we were deathly afraid of losing the love and respect of our family and peers. We had finally been accepted and trusted with the innermost secrets of the Man circle. We were a part of the hetero club - Homos need not apply. Isn't that what we strove to be all of our lives? Little boys who understood that being a sissy was worse than having a contagious disease? To learn how to take a punch, mend a limp wrist, and walk with swag, not a switch?

Yet to our surprise, our family and friends claimed to love us just the same - but that was exactly the problem.

The acceptance of our relationship was best served in low visibility. We were out of the closet but now carried a portable partition to keep our affections hidden.

As the years passed, we were considered the "Safe Gays". We didn't fit the stereotype; not flamboyant and we didn't flaunt our sexuality. In short, we never forced anyone to take a deeper look into the homophobia that lied beneath the surface, to challenge those beliefs that were indelibly etched into their psyches.

While we subsisted, we became the Best Men at their weddings, the godfathers of their children, the cheerleaders at their anniversaries, the shoulders for their divorces, and the coaches for their relationships. We celebrated their straightness, reveled in it, rejoiced in their love and envied their romance. Meanwhile, we held hands under tables, stole kisses, and gave quick winks not to set off alarm. There was a void we had been living with that we had become willfully ignorant of.

This seemed enough for us, until it simply wasn't anymore.

When we were approached to be married at the Grammys our first response was fear. What would everyone say? Were we ready to take on the vitriol that would come along? I began recalling conversations we've had about same-sex marriages and learned that for some I loved, Gays getting married was much more than they could accept.

"I mean. We love you guys, but getting married? That's just wrong." Love the sinner, hate the sin.

It was even rare for our families to introduce us as boyfriends without looking as if they would suddenly catch the cooties and be ostracized from the playground.

And to now be called HUSBANDS?!

It was that fear and the reality of the partial acceptance of our relationship that made me say YES. I was exhausted of obscuring our love, living in a constant state of opaqueness.

The day of the wedding, Butterflies played tackle football in my stomach. We stood waiting in a single file line of 33 Gay, Lesbian, Straight, and Interracial couples ready to declare our hearts to the world. The surrealism of the moment began to sink in.

"Are we REALLY about to step out on stage and get married at the GRAMMYS?!"

As I looked around the mammoth arena, there were thousands of people as far as the eye could see.

Will they heckle us? Will they jeer and boo? Is my family tuned in? What will my dad - a pastor who doesn't agree with same-sex marriage - say? What will my religious relatives post on my Facebook page tonight? And who am I gonna have to DELETE? What will the friends who have never even seen us kiss say when we press lips on national TV?

In the midst of my internal psychotic dialogue, Mackelmore began performing Same Love and Mary Lambert began singing the chorus.

We commenced to march to the lyrics of our lives. The audience slowly began to realize what was happening and suddenly stood to their feet and began to applaud. Many cried, some grabbed their hearts, and others watched in awe. The ovation was thunderous. In that moment, walking through the roaring crowd, love parted the waters of intolerance, and I saw my fiancé walking towards me, proudly, his head held high. I was overwhelmed.

We seized hands and walked towards the light and as I turned to look into his eyes, I saw our lives together flash before me; almost two decades - the boys we were and the men we have become - but most of all, the time spent loving in the shadows - a love never fully acknowledged or celebrated.

And for the first time in 18 years the love we had given others was fully reciprocated.

A dove may not have descended, but our hearts sprouted wings and took flight. 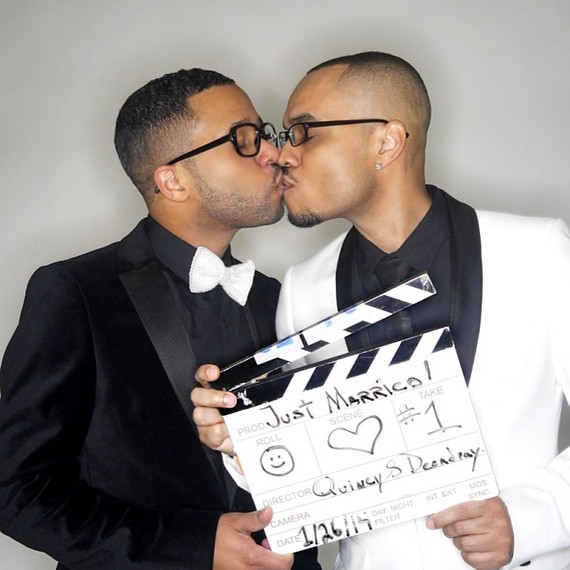