When I first began in 2011 to document anti-foreigner rallies in Israel, I would often ask those in attendance why they were calling for the government to kick out of the country all African asylum-seekers. Up until that point in my life, I had never before encountered groups of people who were willing to publicly state that they advocated for the expulsion of an entire population. Admittedly, I was repulsed by these opinions, but I approached my interview subjects respectfully and engaged them seriously, if critically.

Sometimes I would silently document their monologues, and at other times I would play devil's advocate, pointing out what I perceived were weaknesses in their arguments. If they claimed that the Africans were criminals, I noted that official police statistics consistently demonstrated that the asylum-seekers have a lower crime rate than native Israelis. If they claimed that the Africans were terrorists, I noted that they had all been screened by Israeli security forces and that no African had even been charged with a security crime, let alone convicted of one.

After a few back-and-forth exchanges, my interview subjects would often despair of convincing me with logical arguments that all the Africans should be deported. Often, they would then resort to the following retort, or some variation on it: "Well, if you love them so much, then why don't you take an African into your house?!" This statement rests upon the assumption that if there are any Israelis who do not want the government to deport all the asylum-seekers, it is only because they have had no close contact with them. According to this theory, if these Israelis only lived in proximity to Africans, then they, too, would surely take up the call for their immediate expulsion.

It is possible that some Israelis who advocate for the rights of the Africans would be far less sympathetic to their cause if they were required to live with them. It could be argued that those Israelis who do live in the same neighborhoods that the Africans have been clustered into should have a louder voice in the public debate over how the asylum-seekers should be treated. But by that logic, if a supporter of African rights reveals that they do, in fact, live in south Tel Aviv, and that they do, in fact, live with Africans, then their opinion should also be acknowledged to count for extra.

When advocates of African rights are challenged over their choices of roommates, and they reveal these to be African, however, their admissions are not accepted with grudging respect. Rather, the realization that they are "race-mixers," or what are referred to in the Jewish-Israeli discourse as "assimilators", earns them outright disqualifications. In Israel, weddings between Jews and non-Jews are impossible by law and romantic relationships between Jews and non-Jews are actively discouraged by state-funded anti-miscegenation patrols. In this context, questioning a human rights advocate about their living arrangements is not an attempt to identify hypocrisy, but rather, an effort to flush out race-traitors.

In recent years, unchecked popular hostility towards Africans and ramped up efforts by the Israeli government to drive them all out have also taken their toll on those Israelis who have found love and started families with African asylum-seekers. Because of their unique vantage point, they are especially qualified to bear witness to the state-sponsored and grass-roots racism that Africans endure in Israel on a daily basis. Yet, because their lives in Israel are already so precarious, most are too fearful to speak publicly about their own experiences. Even African-Israeli families that have gone abroad to seek refuge in other countries, hoping for a decent chance at a normal life, are afraid to go on record about the humiliations that they suffered in Israel.

One Israeli woman, however, is willing to speak on video about the challenges facing mixed-race-and-religion couples in Israel. Mai Liberkaz appeared on an Israeli talk show after the anti-miscegenationist group Lehava found a photo of her and her partner, a Sudanese man, on her own personal Facebook page, and cross-posted it to their own page with a racist comment, earning the couple a torrent of hate-mail. Lehava frontman Bentzi Gopstein dominated that media fracas, depriving her of the opportunity to tell her side of the story. In an extended interview in Tel Aviv last month, Mai opened up to me about what it is like to love an African man in the time of Israel's war on Africans. 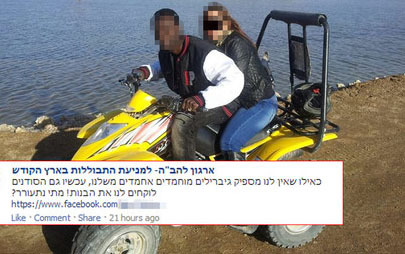