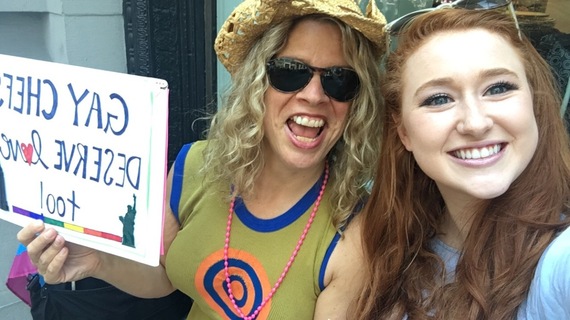 I'm a wedding caterer. It may sound glamorous, but I've spent most of my 27-year career packing food into boxes and making salad dressing. The only glamorous moment is the five minutes at the end of the wedding when the newlyweds hug and kiss me. Once every blue moon I get a standing ovation.

No good wedding professional should be in it just for the money. There has to be something more. We are, after all, in the business of love.

It's an honor to help create someone's dream-come-true wedding. It's also a lot of pressure. A wedding can be the most important day in someone's life. Or not. I've had a few clients who should get the equivalent of frequent flyer miles for all the weddings they've had.

Over the years, I've catered a lot of same-sex couples' weddings. I love getting those first calls. "My fiancée is a woman. We want to make sure you don't have an issue with that," the nervous sounding woman on the phone says.

Back in the day, I tried to erase the sting of not being able to legally marry by infusing extra love into the gay weddings I catered. Adding a little more cilantro or a touch more ginger was a far cry from federal rights, but hey, it was something wasn't it?

Stepping out of the kitchen to watch my heterosexual couples say "I do" has been a mixture of joy and pain. I was truly happy for them, but sad for my own community. Isn't love just love?

Then Massachusetts happened. And guess what? The world didn't end! Happy couples raced to my beloved home away from home in Provincetown and got legally married.

Massachusetts didn't fall into the abyss; it made a boatload of money. Little by little, state by state, gay marriage started to spread. I would have thought New York, the capital of cool, would have led the pack, but we lagged sadly behind until, finally, finally we jumped into the marriage equality mix.

Then Edie Windsor decided to fight for her rights. I took one look at her on news and knew she would win. Who could say no to Edie? It was like saying no to Betty White. She was fierce and proud and adorable. My girlfriend and I had the pleasure of hanging out with her at a book event, and after laughing and chatting for a half-hour, she turned to us and said, "I know this sounds crazy, but I really love you guys!"

SWOON! We love you, too, Edie!

Thanks to Edie and the wonderful team of trailblazers who worked with her, I finally got to cater gay weddings that were legal all across the United States. At long last, LOVE WINS!

Times have changed, painfully slowly but surely. I went from standing on a float in the gay pride parade in the '80s with my fist in the air screaming for gay rights to having brunch on 18th Street and then leaning against a wall as the parade marched by holding a small sign that read, "Gay caterers spice it up."

Walking down the street holding my lover's hand was life threatening when I first came out in 1982. In 1989, a gang of kids surrounded my girlfriend and I walking down the street holding hands in the West Village. One of them reached for a gun. I still don't know what would have happened if a cop hadn't driven by. I guess you might not be reading this.

Today, I see young gay couples fearlessly holding hands all the time. Sometimes I shake my head and think aloud, "These kids have no idea how much we had to fight for the safety they take for granted." But I met an older woman once, a pre-Stonewall lesbian, who said the same thing about me.

Mostly I look at the beautiful young gay couples giddily walking past me and feel joy. Maybe, just maybe, all the hoping, and dreaming and praying is over and the world really has changed. Maybe love really does win.

My chefs and I were prepping for a wedding when we heard the news.

"Orlando." Growing up that word only ever mean one thing; Disney World! Fun and magic and Mickey Mouse waited in Orlando, Not the senseless murder and maiming of innocents just trying to have fun in a gay club.

It was a crisp sunny lovely day on Sunday, June 12th. The wedding we catered was at the Picnic House in Prospect Park, Brooklyn.

The bride and groom were floating on air. The bride's mother hugged and kissed me. Everyone was smiling, as we served hors d'oeuvres to the happy wedding crowd, I looked out the window. There were dozens of children laughing and playing in the grass.

"We all start out like that, don't we?" I asked my sous chef.

My girlfriend taped the 70th annual Tony awards show for me so I could watch it when I came home. I threw myself into a hot shower and washed the curry sauce off my hands and arms then settled in.

That last thing I remember before drifting off to sleep was Lin-Manuel Miranda's emotional acceptance speech for "Hamilton."

The next day I made a simple sign that read "ORLANDO" and put it in the window of my catering company.

A group of teenagers just out of school walked by. One of the boys looked at my sign as he trotted past and gave me the thumbs up.

If I see a gay couple holding hands in Tompkins Square Park today, I think I will kiss them.