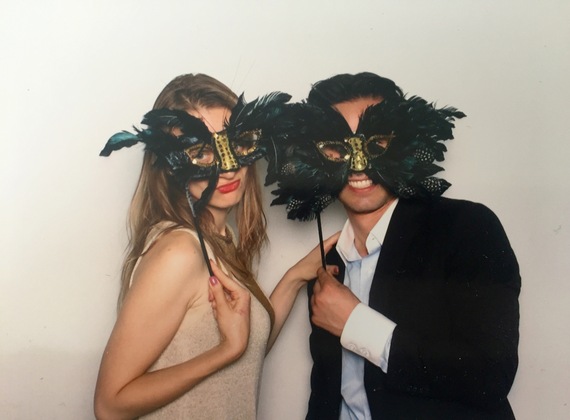 «Hey I have to ask you something», Pierre nervously starts. «Are you seeing anyone?»

It is a warm, calm, dark evening in Cambridge, Massachusetts, and the fall of my freshman year of college. I am a white girl with straight blonde hair, skyscraping heels, bright red nails, and a funny accent, since I just came to the U.S. as an international student from Russia. That night, I danced more than ever before in my entire life, and I am walking home with the boy that danced with me, also a freshman named Pierre.

I've never met a gay person in my life before.

I take some time to process it, and burst out with laughter. «So you're gay???» He looks a bit offended at my reaction. «Pierre, this is GREAT! Now I can dance with you all we want, and my boyfriend will never get jealous!» Pierre is still cautious, but at least he smiles back at me. We make plans to go to the party next weekend; and then the weekend after; and two nights in a row; for the next 9.5 years, we have been practically inseparable as best friends and dancing partners.

Oh, we dance. There hasn't been a dance floor at Cambridge where we haven't boogied. We typically started the night at straight parties, but half an hour in, Pierre always started complaining that the beat is lame, the speakers are too loud, or too quiet, and it's hot in here, and how about we go get a glass of water - what he's really trying to do is, leave for a better (read: gay) party. I happily came along.

I was such an obvious outsider at gay parties. I wear black dresses and pull my hair into a tidy ballerina bun; I could never really drink, and don't like grinding, and what's the point in grinding for a straight girl at a gay party, anyway. But my gosh, I have always been fascinated with the fashionable, fabulous, fearless, flamboyant, gay crowd. Gay parties didn't just breathe love, life and freedom - they firecracked it. Colors, Shakira, Shakira, fruity but light drinks, dragon haircuts, shoes, no shoes, closeness, sweat, hands on someone's shoulders, and the feeling of togetherness, even for me, a straight Russian girl, a total outsider.

I haven't seen such joy anywhere else.

I sneer at people that use #blessed unironically, but today I am one of them. I am absolutely blessed to have so many gay friends that welcome me into their lives, and I can only hope to return the favor. I celebrated my 21st birthday in a gay bar in New Orleans, with Pierre and his wonderful friend Matt, who invited me to his house despite having never met me before. Matt's mother Melanie welcomed me as her daughter, dispensed some pure gold of relationship advice, and fed me the best oysters in Louisiana.

My gay friend Lestat hosted me in his dorm room for Christmas when I screwed up my travel plans and had no place to stay for over three weeks. What's the longest you've hosted family members for Christmas? Now imagine hosting a random friend, over the entire holiday season that is also your only school break. My best memory of these days is the joy of a pistachio cannoli, eaten on a bench near Boston's North End overlooking the harbor, as we watched the planes take off from Boston Logan airport, with Lestat and our other friend Sami.

My friend Kyle (now transitioning into Kirsten) invited me to Tokyo, where he spent two days cleaning his apartment before my arrival, and planned an action-packed week-long journey, which culminated as I marveled the outfits of Tokyo's regal, magnificent drag queens at 5am in the morning in a gay club.

I cannot even start to imagine what it was like at 5am in another gay club, in Orlando, this past weekend. I was not there during the shooting. I cannot imagine. Honestly, I cannot even finish reading the entire New York Times article - even the headlines are too much. Rounds fired, calmly, methodically. "He has us," in bathroom. People that could not get up, "some because they were wounded, some because they were dead." Think about it: one second is enough to kill, and this went on for three hours.

I was not there, but I know one thing: people in that gay club were there for each other. It was not just a dance party - the club has been their place of worship, their shrine. They have build a community that was so friendly and so welcoming to the outsiders like me that I can't even imagine what it was like for the kin. I know they felt joyful, exuberant, fabulous and beautiful and powerful and proud at that party.

On Sunday morning, the monster with an assault rifle in his hand was targeting that very feeling of togetherness, just like the Boston Marathon bomber was targeting the Bostonian strength, endurance and accomplishment, and how the Bataclan shooters thought they could take down the French joie de vivre. This sickening coward in Orlando might have fired his shots and took their lives, but he can never destroy the community. He never built it. He can't take it away.

My mother thinks my gay friends, and Pierre specifically, are "angels", so they are there to protect me. Pierre does protect me - although the evil he typically slays is a particularly onerous bug in my bedroom. Seriously, though, I know that he and his community treat and protect me as one of their own; I deeply appreciate it and never take it for granted.

To all the 49 angels from the Pulse: I love you so much. I am so sorry that I was not there for you. I am so sorry that the least that I can do is write this story, and only today, when it is too late. I cannot thank you enough for the sense of togetherness you created on a dance floor. Thank you for all the joy, love, and pride.

Today, it's not just about my friendship with Pierre, Lestat, and Kyle; not about their wonderful boyfriends, partners, lovers, and friends. Not about the kind and intelligent and queer students at Harvard Divinity School that I work with for my start-up. It's not about the contributions to the world made by the brilliant, powerful and famous gay people that I look up to; not about my addition to my iPhone and FiveThirtyEight election forecasts; not my fascination with Oscar Wilde, Walt Whitman, Sappho, and not even my favorite Tchaikovsky's 1st Piano Concerto, an overwhelming, proud, victorious anthem.

It is about the remarkable community that the gay people have built, human rights victories they have accomplished, and the astonishing acceptance into the community that they allow for the outsiders. There are many communities in the world that are nice to their own members, but hawkish to the rest. The gay community, however, is remarkably is open to people that are curious but different; they are willing to let us into their shrines; share their joys, and celebrate their pride; dance together, until the wee hours in the morning.

For me personally, the gay community is the most welcoming community to the outsiders i've ever encountered, anywhere in the world. I am deeply blessed to have a community of such remarkable love, hospitality, pride, acceptance, and grace.

Dear Pierre! For our 10th friendship anniversary, let's go dance in a gay nightclub in Florida.