Dare to show even the tiniest spark of interest in royal babies or movie star divorces or Olympic decathlete gender identity and you're likely to be scorned for engaging in "celebrity worship."

This is wrong. It isn't worship.

Got that, you high-minded righteous pious scoffers?

It isn't worship. It's not sex-and-spirituality (which I usually write about.) It is instead like watching Mad Men or House of Cards and being utterly fascinated. It's sex-and-curiosity. A little sex and a lot of curiosity. 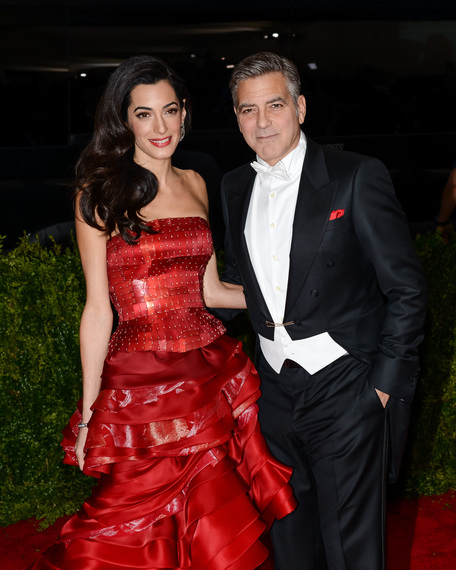 For me, the intimate news coverage of the lives of highly visible people is an unfolding up-close juicy story. The fact that I'm not deeply connected to them lets me (wickedly, semi-heartlessly, I admit) follow their stories as entertainment.

I'm not saying this interest is especially admirable. I'm just saying it's not necessarily admiration and definitely not worship.

I do admire some of these folks:

Colin Firth as "the thinking woman's crumpet." I forget where I read that, but I agree.

Helen Mirren as the woman who re-branded sixty-something as hot. A much-needed service. (I'm 66.)

The Clooneys as gorgeous global do-gooders. Some might choose the Jolie-Pitts for this honor, but I shallowly prefer salt-and-pepper to blonde.

But admiration isn't necessary -- think of the charmingly evil Underwoods of House of Cards. I'm ever interested in what they're plotting. In the same way, I'm curious about what the stars of celebrity gossip are going to do next. The main thing is: I love stories. I'm enchanted and spell-bound and mesmerized by stories.

Yet I don't care for "reality TV." And I'm often put off by celebrities making small talk on talk shows. Somehow these seem less real and more trivial.

And, while I'm on this subject, I'm puzzled by people who write Letters to the Editor of magazines giving advice to errant movie stars. I don't want to tell any of the famous what to do (except for the politicians). I want them to surprise me.

You might counter my argument of non-worship with images of screaming teens held back by police to keep them from getting at the Beatles or Justin Bieber. That's not worship either. Or idolatry. That's sex and maybe a little curiosity.

I was about twelve when I watched a a red-headed boy of about fourteen walk onto a stage to sing, as part, I think, of that year's Wilmington, NC, Azalea Festival. I viewed myself at the time as a serious intellectual. But as soon as young Eddie Hodges stepped into the bright light, I thought: if I were the kind of girl who screamed at concerts, I would scream now. I knew even then that my impulse was not worship.

Over the Back Fence

But back to my original premise -- I love celebrity gossip because of the juicy unfolding-daily long-running stories. I think these take the place of small-town gossip about neighbors. I've been going through old family letters recently and have run across some memorable tidbits: "X is off to the mental hospital again. (His wife) is having the time of her life. She goes out to eat at least once a day." And: "...Will write more when I find out who else has flipped."

I don't run into a lot of dish on acquaintances these days -- and maybe that's a good thing and maybe Facebook has done away with the need. But I'm still keeping up with the riveting ongoing from-a-distance sagas that make up celebrity gossip and talking about them in over-the-back-fence-type deeply-bonding conversations with like-minded friends.

Apologies and thanks to those paparazzi-ridden entertainers who are putting up with this.

(Peggy Payne's novels -- Sister India, Cobalt Blue, and Revelation -- are set at the intersection of sex and spirituality. She writes often on this subject for Huffington Post Religion.)