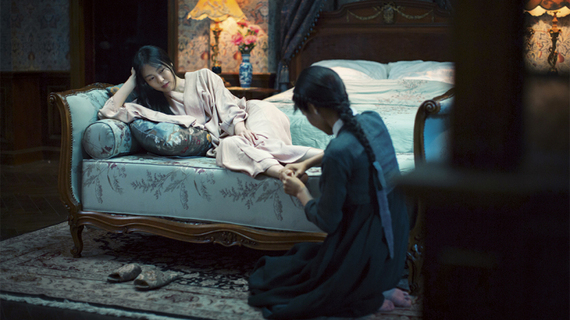 Set during the Japanese occupation of Korea in the 1930s, The Handmaiden, directed by Park Chan-Wook, provides a delicious mash up of culture, class and cons. Add to this a generous dollop of romance and drizzle throughout with lesbian sex, and you have 144 minutes of a twisting adventure.

A young Korean pickpocket, Sook-hee, is hired by a master con artist who calls himself The Count to work as a handmaiden to Lady Hideko, a wealthy Japanese heiress. The Count is Korean but has successfully passed himself off as Japanese. His plan is to seduce and marry the solitary Lady Hideko and then have her confined to a mental institution where she will be murdered, and he will inherit her wealth. He needs the handmaiden to help win her trust.

Told in three parts with a changing point-of-view, we see Sook-hee's softer side as she empathizes with Hideko's loneliness. Still, she made an agreement with The Count.

Chapter 1: Lady Hideko is isolated from the world, practically incarcerated by her uncle, with only his vast library for escape. She and Sook-hee bond. Hideko appears to trust her handmaiden and considers the Count's proposal, but she is unsure about the details of the marriage bed and asks Sook-hee to show her how to kiss. This leads to fondling and more. Sook-hee is an avid and engaged teacher.

Chapter 2: Hideko reveals her hardened side, learned as part of her survival under her Uncle's control. From early childhood, he forced her to read erotica out loud to his club of avid listeners, all male. She took over this job from her depressed aunt who hung herself from a cherry tree in order to escape this singular literary enslavement. The Count reveals to Hideko his original plan to seduce and abandon her, but says he can still help her escape her uncle. But a few sacrifices will have to be made.

Who is conning whom?

The connecting scenes between the chapters are the growing love and affection between the two women intermixed with graphic sex scenes straight out of the western pornographer's handbook. A hilarious shot of Sook-hee peering at her lover's vagina appears to be shot from the pov of the vagina. The director loved it so much he repeated the shot twice. Even so, the most sensual and tender scene between the two women involves a thimble and a tooth. This is when they first fall in love.

We've been offered an upstairs-downstairs view of class distinction in British plays, television and movies for decades. Indeed, The Handmaiden is based on the novel Fingersmith by Sarah Waters, set in Victorian England. By transporting the basic plot to Korea, Park Chan-Wook has made the story more interesting, while still providing plenty of twists and surprises.

What about the sex?

For me, the lesbian sex was geared to a male audience. There were lots of full-body shots of the women in various postures, all overlain with the sound of smacking lips. The most pornographic aspect of the story was Hideko reading to her uncle's literary porn club of adult males. While they were mesmerized and turned on, the stories reminded me of The Pearl, a collection of Victorian erotica I bought in the student bookstore my freshman year in college. The purchase was a waste of my hard earned work-study money as the plots invariably had to do with female subjugation at the hands of mature males who called it seduction.

In The Handmaiden, the women prevail. The setting, the acting, and the plot twists make the film a must see. The official release date is October 21.