With all due modesty, I am exactly the person for whom this fall's Desert Trip rock festival was put together.

And I won't be there.

Not that anyone will miss me when the Rolling Stones, Bob Dylan, Paul McCartney, Neil Young, the Who and Roger Waters stroll god-like onto the Empire Polo Club stage in Indio, Calif., the weekends of Oct. 7-9 and 14-16. 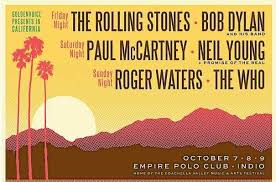 Some 150,000 tickets for the two weekends sold out in about five hours, though much of the real ticket-buying action is just now getting under way.

This show is every scalper's fantasy, oops, I mean the secondary market is well-positioned. It's a cool ticket where the target customer has money to spend and is 99.5% pre-sold.

Anyhow, getting back to the subject of me, I couldn't be a more perfect fit for this show if I had been created as a hologram by the concert promoters.

I'm 67. I grew up with all those acts. I agree with Johnny Cash that Dylan is the greatest writer of our time. I listen to him every day. I love the Stones, McCartney and the Who. I've seen all these acts but Waters in concert multiple times, going back to the fall of 1965, when my friend Mark and I saw Dylan at the Bushnell Auditorium in Hartford, Conn., and the Stones in New Haven. For the record, the Stones's top-40 hit at the time was "Get Off Of My Cloud." Dylan's was "Positively 4th Street."

In the years since, I never fulfilled my parents' assumption that I would outgrow rock 'n' roll. I found other music I liked, but that only expanded the playlist. It never elbowed rock 'n' roll aside.

The artists who will be playing Desert Trip are all over my iPod.

There's also nothing like a live show and I don't mind traveling to see one. My friend Barry and I flew to Dublin in 2006 for Bruce Springsteen's "Sessions" shows and I'd do that again tomorrow.

Nor do I avoid mega-shows. I went to Woodstock, Woodstock II, the first Farm Aid, Live Aid and a spectacular day-long rhythm and blues concert in Burlington, N.J., in 1983.

So why don't I feel any urge to see Desert Trip, a once-in-a-lifetime summit bringing together some of the most towering survivors of rock 'n' roll?

Well, for starters - let's get the most awkward part out of the way first - some of these artists aren't quite the live acts they used to be.

That's not their fault. They're mostly in their 70s, which, trust me, is different from your 20s.

It's great they're still around and performing. But the once-in-a-lifetime part of this show also has a disquieting subtext of last-in-a-lifetime. Let's hear "Hey Jude," "Mr. Tambourine Man," "Can't Explain" and "Jumping Jack Flash" one final epic time before all these guys are, you know, gone.

It's a nostalgia package - something the Stones embraced years ago with astounding success while Young and Dylan, in particular, have at times tried to resist.

Now there's nothing wrong with hearing a great song again. Music helps define our past, and Desert Trip feels a little like a giant piñata. Take a swing and see what part of your life pops out.

Maybe it's the sheer scope of the package that makes me hesitant. At a certain point, putting more sugar in the lemonade doesn't keep making it better.

Or maybe it's the fact, hardly unique to Desert Trip, that rock 'n' roll concerts in recent years have felt less like a place to sit down and hear some tunes than finely calculated corporate products.

Expensive corporate products, accessorized with expensive merchandise. The tab for a T-shirt would feed a family of five for a month in much of the world.

While no one begrudges artists a decent living, music has always been the most democratic and accessible part of popular culture. It's depressing that concerts seem increasingly like pro sports events: a playground and perk for people with lots of money.

And then finally, there's this: For an old guy like me, attending Desert Trip would be a lot of work.

When you're young and everything functions well, you don't mind spending hours to get there, stand in lines, hang around. It's part of the deal.

When you're older, that part gets less fun.

Probably 20 years ago, I was interviewing Mick Jagger and asked him if, as a fan, he still liked concerts.

Sure, he said, but as he had gotten older his idea of the perfect concert had evolved. He'd like it to start around 8 p.m., he said, and be over by 8:45.

Certainly there are exceptions. Ask the band in which Mick Jagger sings. But I knew what he meant.

I have a granddaughter, Sarah, who went to the Empire Polo Club last year for Coachella. She was there for a couple of days. She loved it.

I'm not ready to pass the whole concert torch to her yet. But some things are more worth it when you're 23.

Brilliant as so much of the music from these artists has been, Desert Trip sounds a little too much like a hard day's night.