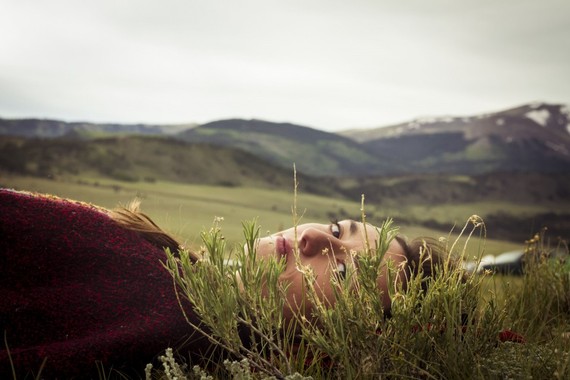 There is no more unique air than that which passes through the human larynx. The oxygen that facilitates our voices surrounds us, becomes a part of us, then emerges as something new. Where our voices go after that depends on what was said and by whom it was heard. Certainly the sweetest sounding air is that of the singer, having found its way into every corner of human history. Like the charming serenades of Orpheus, as the dulcet sounds of singing enter our ears, its effects are not only physiological but spiritual as well. From air to emotion, the human voice is truly a magical entity.

One of the most poignant voices currently floating about is that of Ayla Nereo. Delicate yet powerful, she sings with a sweet cadence that warmly wraps itself around your mind. Released with Jumpsuit Records on September 9th, her fifth solo album The Code of the Flowers, is a 13-track prayer to Mother Nature. The carefully selected tribe of musicians who contributed to this album are Amelia Rae (piano, harp, and vox), Brian Parks (percussion and vox), violinist Lydia Violet, flutist Jesse Hendrix, and longtime friends MaMuse. In addition to the instrumentalists on the album, The Code of the Flowers was recorded, mixed, and co-produced by Tyson Leonard and Ryan Herr, with production support from David Sugalski (The Polish Ambassador). Every person who touched this album played an integral role in making it bloom.

Full of intention and praise, Nereo utilizes her innate musicianship to build an album that is glistening with sonic rapture. Her keen ear for harmony is apparent as she loops her voice into layers of sound, a skill that translates seamlessly into her live performances. While her talented ensemble adds a flawless accent to the sonic palette of the album, Nereo's voice is the strongest element, carrying the listener into an evocative landscape that begs the question: when will we change from standing upon our planet to standing with our planet?

The haunting air of Nereo's voice carries with it meaningful lyrics. From appreciating the oxygen that the trees selflessly provide for us to watching the river as it shines like ribbon, this ode to Earth is perfectly representative of Nereo's gentle spirit and active mind. A poet, musician, visionary and mystic, Ayla Nereo is an otherworldly artist who shares the fruits of her soul with eager listeners. Releasing yet another emotive creation, she has found a way to rustle the saplings of change. Whether her words are shifting paradigms or imbuing gratitude, The Code of the Flowers is an enchanting entreaty for love and mindfulness. Though upon the Earth we stand, its fragile state rests in our hand.