Joe and I fell in love over Domino's pineapple pizza and late night walks to a 24-hour hole-in-the-wall Dunkin' Donuts in the Spring of 2000, when we were students at Skidmore College.

Nearly a decade-and-a-half later, my palate has, shall we say, expanded. His? Not so much.

I love plates filled with every color of the rainbow. He prefers food that comes in shades of beige, brown and white. I'm a vegetarian-leaning lady who swoons at farmers' markets and hasn't eaten red meat since 1992. He's a meat and potatoes man who wouldn't eat a Brussels sprout to win a bet. Yeah. It's not just that he eats meat and I don't. He. Doesn't. Eat. Vegetables. He is confounded as to how I can not only eat, but relish, homemade green smoothies and what he refers to as "big piles of leaves." (Some of us call those "salads.") To wit, all photos in this article are of dishes I have prepared and he has not eaten. 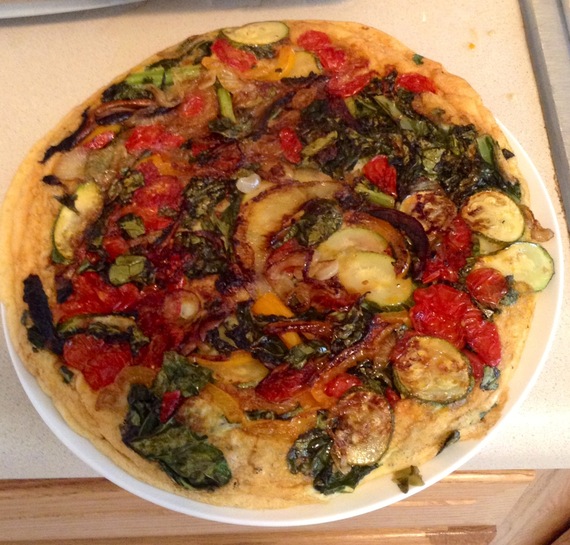 Roasted vegetable frittata -- not if I paid him.

I tease Joe that his inner child is alive and well in the foods he eats. Okay, I tell him he eats like a 6-year-old. He's perfectly pleased to consume fast food and frozen chicken fingers. He claims that something called "hot dogs cut up in barbecue sauce" is a delicacy. I'm a bit nauseated just typing that. I recall an outing to a top-your-own frozen yogurt shop. After declining to taste my selection of key lime yogurt with kiwi, coconut and mochi, Joe gave me a bite of the hot fudge, M&M-Reeses-marshmallow-etc. concoction he'd created, topped with whipped cream, rainbow sprinkles and maraschino cherries (plural).

"It's like kindergarten in my mouth," I informed him.

The point here isn't that I have "good" eating habits and he has "bad" ones. I still like my pizza. I have a relentless sweet tooth. Give me cupcakes and I'm a happy woman. I steal too many of his fries. I'm a real grazer. If Joe has the palate of a 6-year-old, I have the eating pattern of a 2-month-old. You pretty much have to feed me at least every couple of hours, otherwise I'll get cranky.

People ask us on a fairly regular basis how we contend with our culinary differences. Believe me, it's not a situation that doesn't come with its own set of challenges. If you have a spouse or partner, or even a child, with very differing taste in food than your own, you can empathize, I'm sure.

We sometimes end up spending more money on groceries than if we ate all the same things. One could argue that our food budget would be greatly reduced if I would eat TV dinners or hamburgers, but I'm going to claim moral high ground here (also I'm the one writing this, so who's going to stop me?) and state that kale and fennel are better investments than Steak-Ummms and Lucky Charms. It also means that we often end up using more dishes than if we weren't cooking separately, so that's a bit annoying. 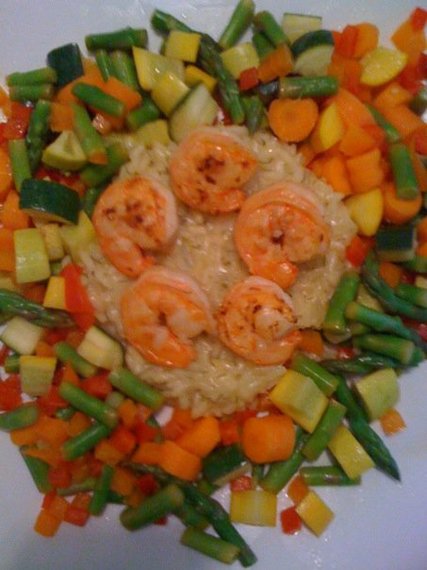 He'll eat the risotto. The shrimp and veggies? Not if I served them wearing stilettos and bubble wrap.

And, you know, I do worry about his health, especially down the line. He's in good shape, actually. I'm the one with chronic pain and 20 pounds to lose. But I'd still hate to see what the insides of a 34-year-old man who doesn't eat vegetables looks like. I'd be even more loathe to see those same insides in another 30 years. And I do worry about what to tell kids, when they come. I can just see it now:

"Why do I have to eat my broccoli? Daddy isn't eating his broccoli."

"Well, Daddy was poisoned by a radioactive plant, and now any time he eats anything green, he blows up like The Hulk."

In the meanwhile, we handle this the same way we handle most of the other challenges we've faced in our years together: We discuss, we fight, we bargain, we compromise.

Despite the somewhat limited range of foods he enjoys, Joe is a good cook, with a willingness to be adventurous in how he flavors items. The peach risotto he created is so good I can forgive him for thinking that canned peaches in heavy syrup qualify as fruit.

We have found restaurants or styles of cuisine that are good for both of us. Fortunately, we both appreciate flavorful, spicy food, so Indian and Mexican restaurants are typically a safe bet. There's certainly enough meat to go around, and both tend to have a good selection of vegetarian food. 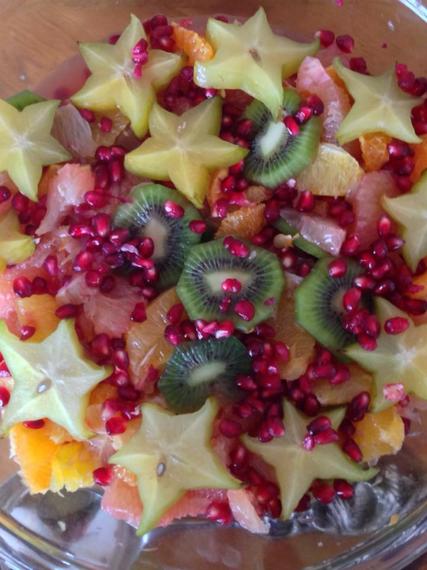 Some fruit goes over well. Citrus, not so much.

And I'm not a strict vegetarian. While I gave up eating mammals 22 years ago (for health, not moral, purposes), I've vacillated at different times in the spectrum between "no red meat" and hardcore vegan. As part of my effort to be more cooperative, I've added poultry into my diet (I also eat fish and seafood; he does not). For Joe's part, he consumes whole wheat pasta when he'd prefer the white flour variety, and often makes lean turkey burgers in lieu of beef ones, so I can partake as well. He makes me a great one with strawberry balsamic vinegar and cinnamon.

Generally, we try to have some element of each meal that is shared. If a "typical" plate consists of a protein, starch and vegetable, we usually each have two of three. I tend to place the protein portion of my meal atop one of those "big piles of leaves." The other night, for example, we bought a roast chicken at the store. Joe had his serving with a healthy (read: large, not nutritious) portion of egg noodles with butter and pepper. I ate my chicken over mixed greens and broccoli, with a small bowl of the egg noodles on the side.

A shared sauce can make things a little easier, even if we're using it on two different types of items. I've drained the excess liquid off my vegan chili and used it as a marinade for his chicken.

And I have, I admit, resorted to subterfuge, Jessica Seinfeld-style. I've blended handfuls of vegetables into half-full jars of pasta sauce. I've handed Joe peanut butter-banana-chocolate "milkshakes," the dark cocoa powder hiding the kale, flax seeds and pasteurized egg whites I've hidden within. He's on to me now. When I hand him some mystery dish or drink I've concocted and command, "Eat this," he regards me with suspicion. 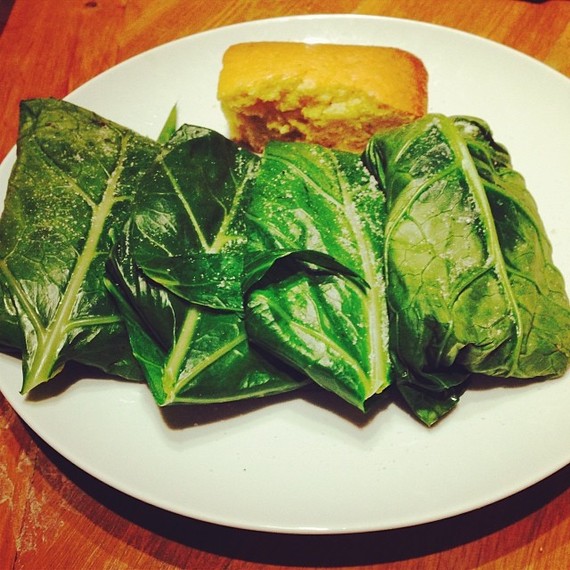 "What terrible thing did you put in this?" He'll ask.

I have no poker face.

I confess, I secretly (publicly) would love it if he would learn to love produce the way I do, the same way I know he wishes I would eat a steak. At this point, though, besides it having no appeal, I'm pretty sure my body would violently reject red meat, were I to eat it.

Indeed, like all situations in which couples don't see eye to eye, there are some points where we will both stubbornly hold our ground.

And others where we find our commonality. 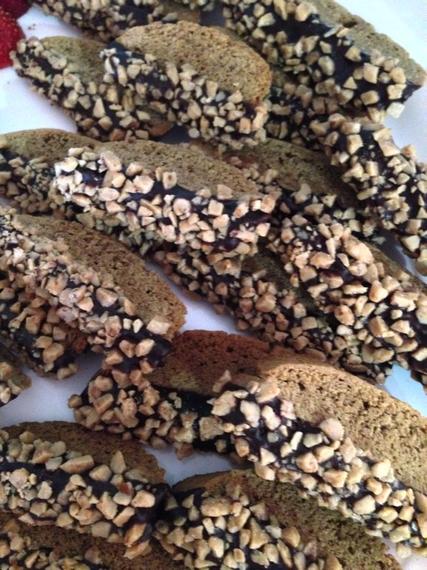 And my coffee toffee crunch biscotti. When in doubt -- feed the sweet tooth.

Does not come with a trigger warning