Author's note: When asked which pronouns Andre prefers, they responded, "You can refer to me however you'd like. I don't want that stuff to get in the way of the message." I chose to use the pronouns "they" and "their" when referring to Andre. 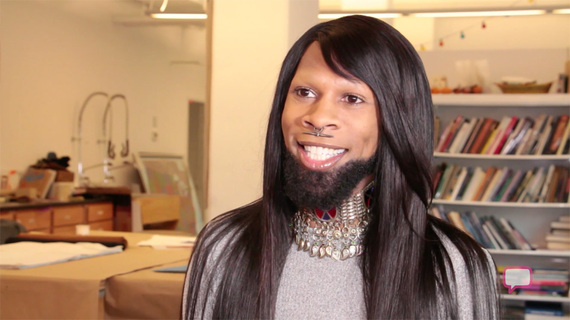 "Love yourself." It seems like a simple-enough mantra, but for Andre J. it took a lot of learning experiences to understand its true power. After being bullied while growing up in the projects in Newark, Andre moved to Los Angeles to focus on their art. Andre's unique look and style gained a lot of attention and admiration, earning three appearances on The Tonight Show With Jay Leno and Being Bobby Brown with Whitney Houston. Andre recalls an epiphany:

I was like, "Oh, my goodness! All of the things that people teased me about or called me names about, or those things that were supposed to be my flaws, were really my strengths!"

Despite the great experience in Los Angeles, Andre decided to move back to New York City. On the flight back, Andre saw a documentary on two-spirits:

[W]hen I saw that, I was like, "Oh, my goodness, so this is not just about 'gay' or 'straight.' This is really about the spirit of people; this is about the way people feel about themselves." So when I returned back to New York City, it was just like I had this new idea of life, this new energy, this spice. I decide I'm going to wear a wig and women's clothes and heels and dresses. When I was doing this in 2005, no one looked like what I was doing.

Now that Andre had finally become closer to who they really are, people began to notice. Andre was booked to be photographed by world-renowned photographer Bruce Weber and ended up being the first male-assigned African-American person to grace the cover of French Vogue. Andre explains what's so special about finally being oneself:

I think the overall vision of what it is that you see comes from the depth of me loving myself. It's not just about the exterior. The exterior is what it is because the interior actually is in alignment with it. I love myself.