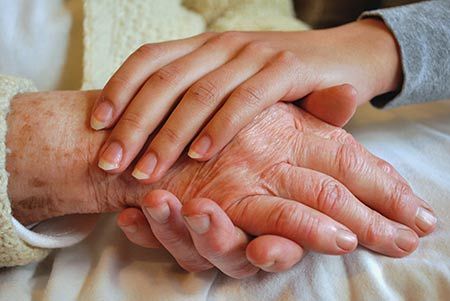 Saying goodbye to a dying relative or friend -- what to talk about, when, and how -- doesn't come naturally to most adults. The irony: All these conversations ask of us, ultimately, is what people appreciate hearing at any time of life: words of candor, reassurance and love.

Below, those who've been through the experience of saying goodbye share what felt right to them -- and what they wish they'd done differently.

Lesson 1: Don't wait until the last minute
It's hard to say goodbye, but putting off meaningful conversations is perhaps the number one source of regret. Time and again, families ask Massachusetts hospice nurse Maggie Callanan to tell them exactly when the final hour is approaching, so they can time their goodbyes. This is dangerous, she says, because it's nearly impossible to predict the final breath.

"Dying people have the uncanny ability to choose the moment of death, and it's not uncommon for them to spare those they love the most or feel protective of by waiting until those people leave the room," says the author of Final Journeys: A Practical Guide for Bringing Care and Comfort at the End of Life, who has witnessed more than 2,000 deaths.

"I felt cheated because I was so determined to be there with her -- and she died when I ran out to use the restroom," says a North Carolina man of his mother's death. "I wish I'd spent less time focused on making sure she wouldn't die alone, and more time on telling her what she meant to me."

Dying people want to hear four very specific messages from their loved ones, says palliative care physician Ira Byock, author of The Four Things That Matter Most. These are: "Please forgive me," "I forgive you," "Thank you" and "I love you."

"Ask yourself: Is there anything critically important that would be left unsaid in our relationship if either of us died today?" says Byock, who's also director of Palliative Medicine at Dartmouth-Hitchcock Medical Center in New Hampshire. "It's not as if anything you say is wasted if the person continues to live a while."

Lesson 2: It's OK, even comforting, to let on that you know the end is nearing
Realize that the dying person usually knows what's happening, Callanan says. "When those in the room don't talk about it, it's like a pink hippo in a tutu that everybody's walking around ignoring. The dying person starts to wonder if nobody else gets it. That only adds stress -- they have to think about others' needs instead of dealing with their own."

It helps to reassure the dying person that you understand and are ready; in a way, you're granting them permission to set aside the troubles of this world. That doesn't mean you must use direct language about death. The dying often use symbolic language that indicates preparation for an imminent journey or change, Callanan says. Especially common is talk about travel, preparing for a trip, or seeing a particular place, "as if they have a foot in two worlds."

One 49-year-old North Carolina woman's mom, in the hours before she died, was worried about getting on the right plane and kept saying, "Let's go!" Had the woman and her siblings known to expect this sort of thing, she'd probably have been less likely to think her mother was losing consciousness and more inclined to meet her words with encouragement for "safe passage." "Nearing death awareness" (as the phenomenon of saying and seeing unusual things on one's deathbed is known) is seldom caused by medications or dementia, research shows.

Lesson 3: Follow the dying person's lead
If the person talks about impending death either directly or indirectly, go along. Don't correct the person, Callanan advises. "It's like trying to argue with a woman deep in full-blown labor," she says. A helpful response: "Tell me more."

Expressing anxiety about finishing certain tasks is akin to that "Did-I-turn-off-the-stove?" worry people feel before going on a trip, she says. Follow the metaphor with reassurance: "You've done a good job; you're all set."

Sometimes the person may ask, "Am I dying?" as a way of gauging your feelings. Instead of attempting to give a yes or no answer, reflect the question back: "I don't know. How are you feeling?"

Others refuse to directly discuss death. Jo Reichel's dad was one, despite being recommended for hospice multiple times as his heart failed. "Then he told my mom he had to die by August 18 because the girls (his daughters, who are both teachers) had to return to work," says the Royal Oak, Michigan, mom of three.

"On August 11, at 1 a.m., he summoned his children and grandchildren and spent the next two hours speaking privately to each of us. He died at 6:30 a.m. He knew, and I'm so glad we followed his lead," she says.

Lesson 4: Truth is good -- but so is the little white lie
"I wish I'd been less direct," says Elle, a t30-something consultant. When her mother, dying of lung cancer in Pennsylvania, asked her if she and her brother had reconciled after a long feud, she replied, "No, not really. Things are still rocky."

"In retrospect, I wish I'd said something like 'We're working on it,'" she says. "I think she was sewing up loose ends and wanted to know her children would go back to liking each other."

Reassurance that their loved ones will fare well in their absence helps people feel they can go peacefully, hospice workers say. It's common to seek reconciliation with or between other people, with God or the universe, or within themselves. They often ask directly about particular relationships or express a desire to see someone they've been in conflict with.

One Florida woman who was advised by a hospice worker to let her dying husband know she was OK with him leaving her snapped, "But I can't. I don't feel OK about it." The worker offered some alternatives that felt supportive but easier to say: "You look tired, sweetheart, please don't worry about me." "You've been such a fighter. If you need to rest, it's OK." "I understand what's happening and it makes me so sad, but I'll be all right."

Or you could mention the person's accomplishments or legacy: "I'm so proud to be your sister when I think of all the things you've done" or "We don't like what's happening to you, but you've shown us how to stick together and be OK." Help your loved one see that he or she made a difference in the world or within a particular family, which satisfies the human need to know our lives had meaning and purpose.

What lessons have you learned about saying goodbye to a dying loved one? Share your insights in the comments.

PHOTO GALLERY
8 Things That Make Or Break Your Happiness: AARP Survey
Download
Calling all HuffPost superfans!
Sign up for membership to become a founding member and help shape HuffPost's next chapter
Join HuffPost

Saying Goodbye When Someone You Love Is Dying
8 Things That Make Or Break Your Happiness: AARP Survey

1 / 8
Health
Health was "extremely important" to happiness for 73 percent of respondents. People in "good or excellent" health are three times more likely to report being "very" happy. Interestingly, what may matter most is how healthy you <em>think</em> you are: The AARP found that the percentage of people reporting good health is relatively stable over the 35-80 age range, varying only seven percentage points. That's despite the fact that objectively, older people are in fact not as healthy: The number of people who report they are suffering two or more medical conditions increased 400 percent over the 35-80 age range. (People may be comparing their health to their peers who are in worse shape.)
Alamy