"Be daring, be different, be impractical, be anything that will assert integrity of purpose & imaginative vision against the play-it-safes, the creatures of the common place, the slaves of the ordinary."
-- Sir Cecil Beaton 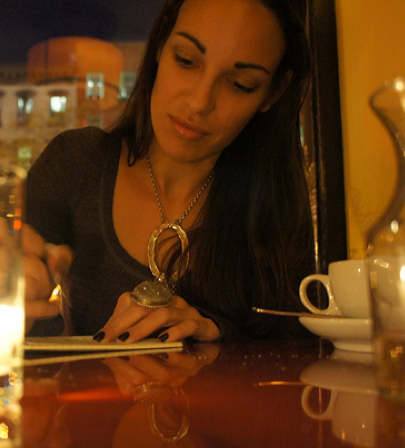 Rita J. King is an artist who believes in the transformative power of the imagination. She is the founder and creative director of Dancing Ink Productions, a company that facilitates collaborative creativity and works toward a "new global culture and economy in the Imagination Age" with a wide range of clients across multiple sectors around the world.

She is also the mayor of LOVELAND, a project in Detroit composed of a series of micro-hoods made of inches that sell for $1 each. The "inchvestors" in the project aren't just buying inches, but rather becoming participants in creating the future of Detroit.

The idea is simple, Rita says: "The Inches are a powerful metaphor for units of measurement in a shrinking city. The project is a collaborative hybrid-reality experiment, with the idea being that the crisis faced by Detroit is so massive that an inch is a simple platform on which to build, the same way a seed can become a tree."

Rita owns 1000 inches in Plymouth, LOVELAND's first micro-hood. Five hundred and eighty-eight people from around the world share space there. LOVELAND hopes that by starting small and growing exponentially, large-scale impact will become possible quite quickly.

I recently caught up with Rita to chat about the project:

Tell me a little bit about what you're trying to achieve with LOVELAND?

Detroit is a great American city. It was once the city of the future, transformed by big industrial visions. Diego Rivera's mural, Detroit Industry, shows the relationship of humans to technology in the Industrial Age. The symbolism is just as important now in the Imagination Age. Jerry Paffendorf created this project with his partner Mary Lorene Carter, and they've developed an incredibly strong network. That's the goal: to create a strong network of people, ideas, resources, imagination and collective action to build the future of Detroit.

The project started off with inches, and inches remain at the core as the platform for development. People from all over the world have inches in LOVELAND and it connects them to Detroit. The project has expanded to include the campus of the Imagination Station. One of the buildings on the campus is a public art space and the other is transforming into a digital media literacy center. Jeff DeBruyn is also a founder and serves as community manager of the Imagination Station. He's been running a soup kitchen in Detroit for years and understands the reality of the situation on the ground. The combination of skills everyone brings to this project is equal parts physical and digital, action and imagination so necessary for reinstating Detroit's status as the city of the future.

Much of Detroit has a ghost-city feel, a cataclysmic landscape filled with arson, addiction, crime, unemployment and other casualties of a swiftly shifting economy and culture. My work centers around the idea of rethinking space and systems. I'm drawn to Detroit's potent creative energy. LOVELAND imagines possibilities for the future and then starts building them. It's extremely exciting and challenging to see it grow.

In working with inches, for example, it became apparent that the maps being created for the micro-hoods looked like real city streets. There's really no difference, at that scale, between an inch and a parcel with a house on it. The maps of the inches started evolving into a social tool for the Corktown neighborhood and beyond.

"I want to bring the sense of playfulness and creativity people feel with their square inches to their city blocks," Larry Sheradon told me today. "By placing the microhoods in the same map as urban neighborhoods and opening channels online for sharing stories and information about land, we hope residents will see their neighborhood is what they make it and the world will see Detroit as the vibrant place it is."

You recently spoke at TEDxNASA. Can you elaborate on what you discussed?

I discussed new concepts of identity and community in the Imagination Age. Until now, all but the luckiest or most adventurous people were born shackled in place in the physical world, into a particular matrix of socioeconomic and geopolitical brackets, with inherited beliefs and relative wealth, poverty, ability and disability -- into systems that are largely predetermined. The digital culture is a chance to transcend many perceptual limitation and physical boundaries. It's not an easy process but it creates an opportunity for us to get to what matters with each other and in groups, if we can learn to overcome psychological limitations and inhibitions as easily as the some of the overt physical boundaries were defeated.

You have said that "technology is a prism for the imagination"... what exactly do you mean by that?

From the first cave painting until the present day, people have wanted to play a role in an ongoing, meaningful story. The capacity for collective storytelling (and thus the ability to pinpoint fears, challenges and solutions together) is a luminous ring around the planet and we can continue to increase the glow until the collective spotlight finally begins to illuminate new ways of moving forward.

Watch the VIDEO on a rescued space in LOVELAND.