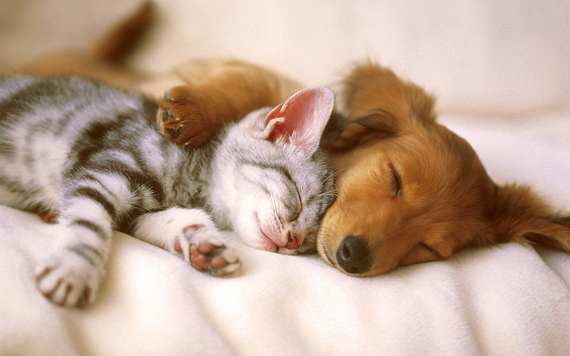 As a neurologist, I've long held that empathy for and connection with animals is an important part of our social development. But can being with animals actually improve our well-being?

In the 1970s, researcher Erika Friedmann and her colleagues made a startling discovery. They followed 92 patients who were discharged from a Coronary Care Unit after having a heart attack or chest pain from heart disease. Their question was how does social support affect the patients' survival at one year after discharge? The researchers found that while only 72 percent of patients without companion animals were still alive at the end of the year, 94 percent of those with animals survived.

Independent of all other factors that were studied, the presence of companion animals significantly improved survival after a cardiac event. Even social support from humans didn't have the large effect that animals did. This was a major finding.

Pretty soon, other researchers began studying how our interactions with animals impact both our physical and emotional health. Studies have since indicated that contact with animals can reduce our risk of cardiovascular disease and increase longevity by lowering our blood pressure, our baseline heart rate, and our cholesterol. Animals can also reduce our cardiac reactivity to stress and promote faster recovery from stressors.

It seems that animals help calm us. Petting an animal relaxes our autonomic systems, as measured by blood pressure, cortisol and epinephrine levels. Animal companionship also improves our mental health by decreasing loneliness, depression and anxiety.

Why do animals have this effect on us? Psychologist Andrea Beetz proposes that oxytocin plays a key role in many of the beneficial effects we see through contact with animals. Oxytocin is a hormone that was classically associated with promoting labor contractions and milk production in new mothers. Recent studies on oxytocin have shown that it has much more far-reaching effects that go beyond child-birth and nursing.

Oxytocin circulates in men and women alike. The list of what oxytocin has been found to do is long. It lowers heart rate and stress hormones, and increases social interaction, trust, bonding, and attachment. It also decreases aggression, reduces stress, and increases generosity. Oxytocin helps us feel happy.

In a famous study led by economist Paul Zak, half of the participants inhaled an oxytocin spray, while the other half received a placebo, and were then asked to split a sum of money with a stranger. Those who received the hormone offered the strangers 80 percent more money than those who didn't. The findings of this study confirmed previous findings by Zak and his colleagues that oxytocin fosters altruism and empathy.

In further studies, Paul Zak and his colleagues found that oxytocin increases in people after they engage in social activities with each other. The level of increase in oxytocin depends on the type of interaction and the closeness to the person you are interacting with. "When your little daughter runs to hug you," Zak wrote, "your oxytocin could increase 100 percent. When a stranger shakes your hand, it might be 5 or 10 percent." No only does oxytocin facilitate social behavior, it is also affected by it through a positive feedback loop. The more meaningful your social interaction with another, the more oxytocin is released.

Paul Zak next tested if oxytocin is increased when humans interact with animals. Not only were the results affirmative, Zak found that oxytocin also increases when different animals interact with each other. Zak took blood samples from a dog and a goat who regularly played together. Fifteen minutes after play, oxytocin increased 48 percent in the dog, suggesting that the dog was quite attached to the goat and viewed him as a friend. But the goat showed a more interesting finding. Zak wrote:

"More striking was the goat's reaction to the dog: It had a 210 percent increase in oxytocin. At that level of increase... we essentially found that the goat might have been in love with the dog. The only time I have seen such a surge in oxytocin in humans is when someone sees their loved one, is romantically attracted to someone, or is shown an enormous kindness.

"That animals of different species induce oxytocin release in each other suggests that they, like us, may be capable of love. It is quite possible that Fido and Boots may feel the same way about you as you do about them. You can even call it love."

And here is where we get to the important part of what the studies on the human-animal bond are pointing to. As with interactions among humans, the types of interactions between humans and other animals that will cause the most benefit are those that occur when we feel a sense of empathy and love for the animal  --  and, vice versa. In other words, the stronger the bond, the greater the benefit.

This article first appeared on ThriveGlobal