In the early seventies I dated Mike Nichols. In the fall of 1971, we were introduced through a mutual friend Buck Henry who wrote The Graduate that starred Dustin Hoffman and Katherine Ross. Buck and I had met at the late night parties producer Lorne Michaels gave in his apartment at the mysterious and rumored to be haunted Osbourne after tapings of SNL. My good friend Heather Mac Crae who starred in Hair on Broadway would invite me to these parties.

As a model, I just had been photographed for the covers of Cosmopolitan, New York Magazine and Newsweek in the same month. My modeling career was percolating. My social life as well.

"Would you like to have dinner one night with me, Carole?" Mike said when he called me. I was thrilled at his invitation. We went to several unpretentious restaurants, then the Russian Tea Room. When Mike listened to me, I felt he cared. I felt my words meant something. I felt my thoughts and my opinions had worth. He actually asked my opinion. Mike bolstered my self-esteem about being opinionated which was needed as I was a model who had gotten a thick skin not for my opinions, but for my looks.

"Shut up and smile," is the frequent direction, maybe not in these exact words, given to a model during a photo shoot. Due to my appearance, stares from people were the norm, but few cared about what I had to say. In fact, often models were discredited because we were models and thus it was assumed we were vacuous, empty vessels of narcissism. While some models were, indeed, just that, others were busy developing their minds while their wallets were being filled by smiling for the camera.

One night at dinner at the RTR, Mike said to me, "Would you like to go to Jackie Onassis's Anniversary for Ari at El Morocco? I would be flattered if you accompanied me." Of course I was excited to attend this historic event.

I wore a black satin floor length gown from Norma Kamali and my tatty old Mongolian Lamb coat over my shoulders. Mink or high priced fur were not my thing. I had bought this coat in Paris in the late 60s when I was pounding the streets with my metro guide to Parisian streets in one hand while on go-sees to meet photographers.

Mike arrived with his limousine on time and came to my door. "Shall we," he said sarcastically. "This should be something to remember." Mike Nichols' sense of irony and sarcasm were champion.

As we entered El Morocco, we were photographed by a barrage of paparazzi. Our enclosed photo was published in Life Magazine. 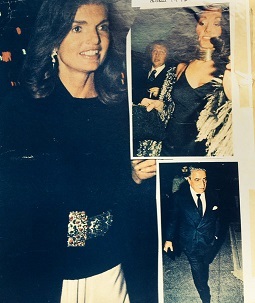 We joined the line to greet Jacqueline Onassis. As I shook her hand, I was stunned by her warmth, her wit as noted by the twinkle in her eyes and her riveting attention which she gave to me and to all her guests.

I was shocked by her height. She towered over her guests and, of course, Mr. Onassis as she moved like a giant swan. Her neck seemed to go on for miles and so did her Mona Lisa smile. Her voice was kitteny soft as though she were speaking on cumulus clouds. Her kindness radiated despite her jewels and opulence. Oh, I never spoke at any length with her, but she helped dispel the myth that not all the rich and famous were, beneath the surface, the rich and dangerous.

The guest list was naturally star-studded, but name-dropping seems inappropriate.
After the dinner we went back to Mike's apartment in the Beresford where we met up with Jack Nicholson and his date. Jack was charming and had been bowled over by the event as we all had been.

When I reflected upon my friendship with Mike Nichols as I watched the HBO special Becoming Mike Nichols, I was most moved by his comments about directing the final scene of The Graduate. He said that he had told Dustin and Katherine he wanted big smiles as fifty policemen were following the bus and they had one take. Mike said he learned a lesson that as a movie is made each participant draws from his or her experience and this is the pay dirt in the acting. Mike said it was inappropriate for him to direct his actors in how to feel as an actor's feelings are the magic as are all feelings in the arts.
I feel this about writing a review.

Today I am a critic and a movie reviewer as well as a teacher. I teach my students to write with the TV on so that they are not intimidated by the people about whom they are writing. With the TV in the background I tend to write what I am feeling, what I remember, not what I think sounds good which is a trap in the literary community. I believe this is what Mike Nichols was saying. Truth is spoken viscerally. Truth is what it is all about. Truth about feelings is what an artist seeks.

I feel Mike Nichols was the first glimmer of encouragement to my becoming a writer and no longer an object to be looked at -- either as a model or an actress. I tend to agree with Princess Grace to whom I was introduced by Sam Spiegel while my husband and I were on a cruise on his yacht, The Melahne. Sam Spiegel had sailed from St. Tropez to Corsica to meet Princess Grace as he had wanted her to star in Nicholas and Alexander. She refused his offer because she said that being an actress felt a bit like being a parrot.

In 1990 to confirm my desire to no longer feel like a parrot, but to be a critic, Kurt Vonnegut, whom I had the privilege of interviewing, validated Mike Nichols observations by writing a letter for editors in support of my ability to observe.

But the first person to give me confidence about my opinions was Mike Nichols and because of this I will always be grateful for his nurturing presence.

Diane Sawyer gave Mike a loving life -- one filled with respect and caring when she became Mrs. Mike Nichols. She has been supportive of my journalism and my life. In no way are my words meant to offend her, but merely to claim my moments in history to the man whom she loved and who loved her.