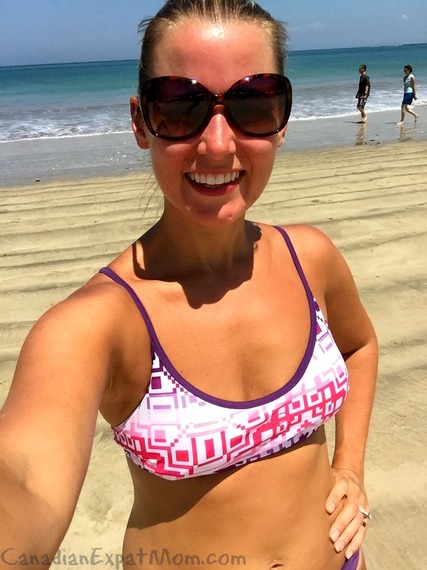 Our family had just relocated to Indonesia, and we were on our first vacation in our new country. We were spending two glorious weeks on the island of Bali with our daughters, who are 2 and 4 years old.

Unfortunately, they haven't quite mastered the skill of sleeping in yet. Which meant early morning walks on the beach for us. But let's be honest, there could be a lot worse things to be dragged out of bed for. So I didn't complain. I dug through my suitcase and hoped the elastic in my swim suit would be forgiving.

While the girls were splashing happily away at the edge of the ocean, I gazed down the never-ending beach. After 6 years my husband seems to have developed a skill for reading my mind.

"Why don't you go for a run?" he suggested. He wasn't saying it because he thought I needed to exercise, but because he knows that my favourite place to run is along stretches of waterfront sand.

"Because I'm in my bathing suit!" I protested.

The next few moments stood still as I had internal dialog like Kevin from 'The Wonder Years', but the voice inside his head was much kinder than mine was being.

There's no way you can run down the beach in your bathing suit with all these uber fit surfers and yogis everywhere. Things will jiggle. Things will REALLY jiggle. You can't.

"Just go" my husband said rolling his eyes, knowing exactly why I didn't want to go.

You see, the thing is, I like to eat. And this past spring, we found out we were moving from France, where we had lived for the past 5 years, to Indonesia. So I did what any foodie naturally would, and I ate myself silly on all things French. I went crazy on fresh bread, stinky cheese and cured meats. Then I washed it down with copious amounts of wine and Champagne.

After that I went home for the summer and indulged in all things Canadian that I hadn't had access to in 5 years. There were new restaurants to try and many family BBQs to attend.

A few months later, standing on a beach in Bali, I knew that my lack of "thigh gap" wasn't only genetic, but also self inflicted. I had attended a couple too many potlucks to be able to say I was completely comfortable in my bathing suit; let alone the idea of running down the beach wearing it, à la Pamela Anderson. I wasn't the heaviest I've ever been, yet there have been times when I was far more fit.

Then my gaze shifted to my daughters. Cue the Wonder Years music...

I am their role model. They are watching.

The negative internal voice was about to pipe back in, but I mentally slapped her before she could speak.

I made a watch this face at my husband, kicked off my flip flops, turned on my heel in the sand, and started running!

It was mid-morning by now and the fit people were out in full force roaming the beach with their rock-hard, tanned bodies, and willowy limbs. The beach was busy and I was painfully aware that without the shield of my magical Lululemon attire to lift me where I needed to be lifted, and hold me in where I needed to be held in, there was no where to hide.

My waste line felt Iike a beacon of light reflecting the sun, while my inner thighs were having a game of bumper cars with ever step I took. At least that's how I felt. The voice in my head was right. Things were jiggling; and for the first couple minutes I felt extremely self conscious.

I was about two seconds away from stopping dead in my tracks when I decided to switch the voice in my head to the girl I liked better. The one that builds me up instead of tears me down.

You should be proud of yourself. You're lucky to be on this beautiful beach, and you're a good runner; so run. Who cares if things are jiggling; nobody's perfect. You're better off running in the direction you want to go, than sitting on the beach with a bag of chips feeling sorry for yourself because you jiggle a bit. If people are judging; let 'em judge!

So, in the words of Forest Gump, "I just kept running."

Eventually I turned around. Not because I was ashamed, or embarrassed; but because it was really hot outside and my skin would soon be resembling beef jerky. I ran proudly back down that beach, a different person than I was when I set off. After a while I could see my two daughters splashing around at the foot of the waves. They were my finish line. They were the reason I started, and the reason I'd finish strong. My inspiration was clear; and even though this run was only a small drop in the pond of choices I make as their mother, I know they are always watching.

"Did you have a nice run, Mommy?" My 4 year old asked as she looked up from her sand castle.

And I meant it. 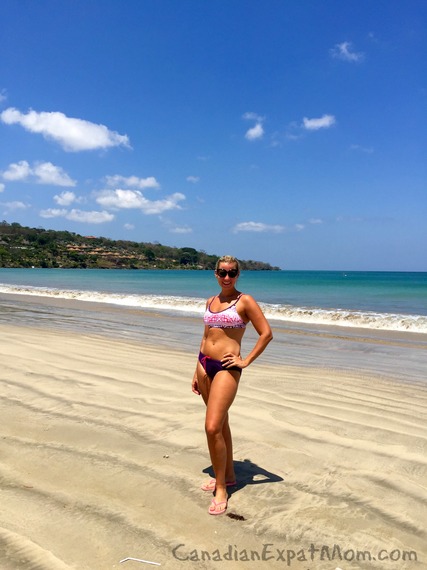 That's a post run picture on the beach. (About 10 minutes later, once I could breathe again.) Some people will look at this photo and think that I have nothing to worry about, while others will cringe and wonder how I could ever post it on the Internet (I did struggle with actually clicking publish).

Someone will think I'm too fat, too skinny, too tanned, too pasty, too tall, or too flabby. We will never please everyone.

There are enough critics out there that we need to be our own best friend, not worst enemy. What's important to remember is that no matter what our bodies look like, or what we do to get them that way (good or bad), we have an entire generation of young girls watching how we act, and react to our own body image. Love yourself, treat your body well, and no matter what- love the skin you're in!

This article was first published on Canadian Expat Mom.

Get your copy of The Kids Who Travel The World-Paris, the first book in Lisa's children's book series.