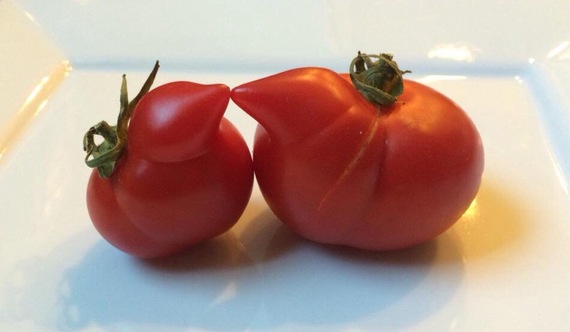 I used to think that the fruits and veggies I saw in supermarkets were all there was. I thought this perfection of fruit and veggie color, size, and shape was how nature had intended our food to be. If I ever saw a misshapen or small piece of produce, even at the farmer's market, I would say to myself, "There must be something wrong with this!" before putting it back down. Boy, was I wrong about this supposed "ugly" produce.

My awakening began in 2014, when I was planning the Feeding the 5000 Oakland and I started to learn more about this supposed "ugly" produce. I learned that we were wasting approximately 23 percent of fruits and vegetables in the U.S, due mostly to optional cosmetic standards imposed on farmers by large grocers and produce marketing associations. These standards are mostly concerned with looks, and have almost no bearing on taste, shelf-life, or nutrition.

I thought "Could this really be as ridiculous as it sounds? Could we really be wasting perfectly good produce, while 50 million Americans are food insecure and many more produce deficient?" And indeed this ugly truth was lying beneath the surface, without much attention in the U.S.

Once we completed the Feeding the 5000 Oakland, I couldn't shake this "ugly" problem with produce. I racked my brain to see how I could make a difference, highlight the issue and engage people in a positive way. I wanted to raise awareness and eventually solve the problem. Then it hit me: we weren't appreciating all the diversity, imperfections, and bountiful offering that makes produce so beautiful and nourishing in so many ways.

That's why I started the @UglyFruitAndVeg Campaign: to entertain, educate, and engage citizens and get retailers the world over to sell ugly produce. The campaign has garnered an overwhelming amount of media attention with over 100 features and more than 125,000 followers in 190 countries, all in just under 18 months. Most impressively, we've gotten Whole Foods Market to start selling "ugly" produce! When people learn about this ridiculous problem, they immediately want to do something about it. It's just a matter of harnessing the power of social media to put pressure on grocers to do the right thing.

We've certainly put other grocers across the world on notice that this irresponsibility on their part will not stand. As a result, more and more grocers are selling ugly produce in the U.S., Canada, and Europe. Most importantly, the campaign has changed people's perceptions about what is ugly. People now celebrate (and buy!) all types of less-than-perfect produce, not just the flawless stuff that has been pushed on us for decades. They even send me nice images and message daily to prove it!

It doesn't hurt that this healthy, nutritious produce is available at a steep discount just because it looks a little different (and sometimes a bit ugly).

I see the change in my own life. "Ugly" produce has shifted my family's perceptions and habits on produce of all kinds. We now consume a ton of fruits and veggies. At breakfast, snacks, lunch, and dinner (and often as dessert too) produce is standard. The meals where fruits or veggies are in short supply leave me feeling like something is missing. Let me tell you, that was not the case several years ago!

When you drop the expectation that fruit and veggies have to look perfect, it opens up a whole new world of produce. Scarred and spotted, but delicious, heirloom apples at the farmers market; the smell of ripe peaches, no matter how twisted and dimpled they are; pluots - my god pluots! Why didn't I ever know about these delicious blend of apricot and plum until now!

Best of all, this "Power of Ugly" has the tremendous potential to get people of all ages (including children) to eat healthier, while wasting less.

In 2013, the Union of Concerned Scientists found that if Americans ate just one more serving of fruits and vegetables per day, it would save more than 30,000 lives and $5 billion in medical costs each year. Even further, if Americans were to follow the current USDA recommendations for daily consumption of fruits and vegetables ("the daily five"), it would mean 127,000 lives and $17 billion saved each year!

This campaign is about making that dream a reality. We can make this happen by "loving ugly" -- educating our friends and family about the benefits of "ugly" produce, and convincing more grocers to offer it (at a discount) wherever produce is sold!

Please, take the first step and get ugly with myself and Culinary Nutritionist Stefanie Sacks, Author of What The Fork Are You Eating? by joining us in asking Walmart to sell "ugly" produce. With over 4,000 stores, Walmart's decision to fight food waste and malnutrition by selling "uglies" would be huge, changing the demand (and availability) for such produce everywhere.

You could even take another step and start your own petition to your favorite grocer, which you can do very easily at Change.org. At the very least, start to consider purchasing imperfect fruits and veggies at the farmers market or wherever you can find them. And then share the pictures with the world at my various @UglyFruitAndVeg social media accounts.

Because ugly (produce) really is beautiful and may just change your life!