"We pray for the souls of the Islamic State militants that killed our families. We know they are motivated by evil and pray they can be freed." I will never forget these words from Jaya Stephanos, the sister of two men that were beheaded by the Islamic State of Syria and the Levant (ISIL) in Libya last year. While working as the Regional Manager for the Middle East at a Washington-based non-profit organization, I was able to meet with family members of the 21 Egyptian Christians that lost their lives on that infamous beach last February. Of all people that should be filled with hate for a religious group, it is these family members; yet, what I heard was love and sadness for those brainwashed by extremist ideology.

My work with persecuted minorities also brought me to Iraq, where the Christian population has fallen to less than 250,000. The roots of differing religious ideologies are being wiped out by ISIL militants who have gone through areas of Iraq destroying churches, mosques, synagogues, and school history books. Despite this, one of the most beautiful things I experienced was from a contact of mine in Iraq, who shared the story of a Yazidi man that built a cross for his displaced Christian brothers after their church was demolished by ISIL militants. 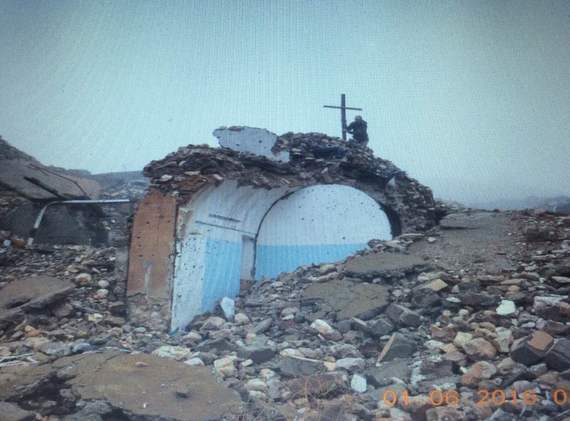 Photo: A Yazidi Man in Iraq places a cross on top of a Christian Church destroyed by ISIL in 2015 in solidarity with his Christian neighbors who had fled the area. Courtesy: Clarion Project

I witnessed Middle East Christians deny our offers of humanitarian aid because their Shi'a, Sunni, and Yazidi neighbors were in "far more dire need" than they. Despite their different religious backgrounds, Yazidis, Christians, and Muslim minorities have come together as victims of the violence promoted by ISIL in Iraq and Syria.

The truth is that there are many Muslims speaking out against extremist ideologies. Take, for example, Khurram Zaki, the Muslim Pakistani activist who was murdered by the Taliban; or the Muslim shopkeeper in the Middle East who took the time to keep me safe by teaching this American girl crucial Arabic phrases; or the Muslim activists at the Egyptian Initiative for Personal Rights who work hard to counter the stringent Egyptian blasphemy laws that land many people, including children, in jail for unclear charges under the umbrella of "insulting Islam."

Back in the US, I learned about "Friends of Refugees," a non-profit organization in Georgia that assists refugees in the community by equipping them to work and acclimate to American life. A volunteer from "Friends of Refugees" spoke with me about his experience.

I was privileged to assist an Afghani refugee who wanted to develop her family's jewelry business. Even though she is responsible for the financial side of the jewelry business, she also runs her own consulting business while raising a family. I was very impressed with her drive, intelligence and determination to succeed, while also helping others.

Another time, I helped a recent high school graduate from Liberia apply for a job in construction, where there is a shortage of skilled workers, because it seems there are more jobs available than there are qualified applicants willing to apply. My personal experience with these refugees is that they are hard-working legal immigrants, who want nothing more than the opportunity to achieve the American dream.

With my background in law, I assisted a Muslim refugee who dreamt of running her own clothing alteration shop in the Atlanta area. I explained the laws and zoning ordinances she needed to follow to make her American dream a reality. She stared in humble amazement at my willingness to help her without expecting anything in return. I became emotional experiencing the deep gratitude from her and others like her.

Today, the Islamic State repeatedly releases statements calling upon all Muslims to join their ranks because "the West rejects you and therefore, you belong nowhere but with us." In November 2015, stories emerged that 31 states opposed allowing Syrian refugees into their territories. Given that it feeds perfectly into ISIL's propaganda strategy, this statistic is alarming.

The US will become ISIL's greatest recruitment tool when we shut our "doors" to displaced legal immigrants. No one can promise the threat of extremist violence will disappear if we begin to understand one another; however, we must recognize ISIL is poised to take advantage of the disenfranchisement of the U.S. Muslim community. Those U.S. Muslim who currently reject violence will be pushed into ISIL's hands.

On this UN World Day, join me in becoming a "friend" of the refugees of the Middle East, be they displaced overseas or within our borders, by proclaiming that our prayers are with the Muslims, Jews, Christians, and all religious persons whose lives remain threatened by jihadist violence and ideology. May we not unknowingly align ourselves with the very extremists we use as the excuse for our own prejudice. We must understand that the majority of Middle East Muslims, Christians, Yazidis, Jews, and other religious groups have lived through far worse than any of us could imagine.

Much like the Yazidi man in Iraq, let us carry the cross of all victims of extremism: be they Muslim, Christian, Jewish, or any other faith background. Let us work to understand our differences and common threads, and allow them the freedom to experience life, liberty, and a pursuit of happiness they have never known.